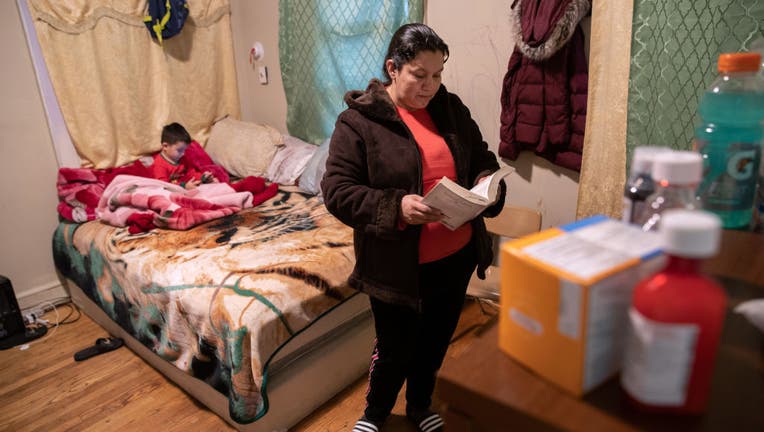 Undocumented immigrants complain they can’t access California funds for them

Immigrants up and down California complain they can't reach a live person at any of the nonprofits the state's Department of Social Services selected to administer&nbsp;$75 million in taxpayer money.

SAN FRANCISCO - Francisco Herrera said among his colleagues, relatives and friends, they have called the various Catholic Charities in the Bay Area up to 700 times in the last three days trying in vain to apply for funds earmarked for undocumented immigrants. They never got the chance to speak to anyone.

"We couldn't get through," he said. "Or we'd get voicemails."

He said he understands that it took several weeks to organize the structure of figuring out how to collect and disperse the money.

"But to have no answer from the funding campaign is an insult," he said.

Altogether, Herrera represents about 200 members who belong to the San Francisco Day Labor Program and Women's Collective, where is a co-director.

Herrera's frustrations are being heard throughout the state.

Immigrants up and down California have also complained they can't reach a live person at any of the nonprofits the state's Department of Social Services selected to administer $75 million in taxpayer money. Gov. Gavin Newsom highlighted the program's creation in April though the Disaster Relief Assistance for Immigrants.

Undocumented immigrants comprise about 10% of the state's workforce, Newsom said, and they should be helped, especially since they are not eligible for unemployment or federal stimulus funds. Conservative groups sued Newsom, saying that taxpayer money should not be used on those who don't have legal status. They lost in court, however.

The program provides immigrants a one-time payment of $500 and up to $1,000 per household. Applicants must provide documents that prove identity and address, and demonstrate that the coronavirus affected their employment. The funds are first-come, first-served basis.

To get the money, applicants must ask one of roughly a dozen approved nonprofits that the state selected.

In the Bay Area, the state chose Catholic Charities to hand out the COVID-19 disaster relief money of $500 per person.

On Thursday, KTVU called the number provided but could not get through to speak to anyone.

An outgoing message said there were too many calls coming in to answer and urged people "please try again later." On the Catholic Charities' websites, there was a message asking people to "please be patient and continue to call 1-415-324-1011 to apply for the Disaster Relief Assistance for Immigrants (DRAI) program. Call volume is extremely high, and yet, with persistence, callers are getting through. It is the only way to apply for this help."

On Thursday, a total of 2,748 applications have been processed of a total of 30,000 people who can be helped in the Bay Area, according to Catholic Charities spokeswoman Liza Cardinal Hand. There have been "well over" 1.25 million calls since then, she said.

"We are well aware of the unprecedented demand for assistance across the state and in our counties and understand the great frustration in our community of undocumented immigrants," Hand said. "We're not being remiss. The demand is so high. It's actually heartbreaking."

By state law, immigrants cannot apply online; it must be over the phone. There are 100 people working the phones at the Bay Area Catholic Charities' organizations and they will be working through June 30 to process all the applications.

Jason Montiel, a spokesman for the state Department of Social Services, said that all 12 nonprofits throughout California are receiving a "high number of inquiries and are working as quickly as possible to respond to people applying for assistance on a first-come, first-served basis."

Nonprofits are working to set up additional phone lines for expanded capacity," he said.

The problem isn't being felt only in the Bay Area.

“I feel disappointed. I’ve been calling since yesterday and nobody answers the phones,” Martina Avila Mendez, a taco and hot dog street food vendor in Los Angeles, told Cal Matters

She and others said their calls were never answered by the Coalition for the Rights of Immigrants, one of three nonprofits serving Los Angeles and Orange counties. At the Central American Resource Center, which serves Los Angeles, the calls were answered but immediately put on hold. After hours of waiting to speak to someone, the calls were cut off.

The LA Times also reported that thousands of people had trouble getting help.

It's also unclear just how many people have now applied for the money.

“Data on the number of individuals who have been provided the disaster relief assistance is not available at this time,” the department’s statement said.

There is another $50 million being dispersed through a variety of other nonprofits through a separate, but parallel fund administered by the Grantmakers Concerned with Immigrant and Refugees, also known as GCIR, in Sebastopol. To date, nearly $30 million of the total has been raised.

In all, the total of $125 million between the two funds is to be shared among 150,000 people in a state where there are an estimated 3 million undocumented immigrants.

If people have questions, they should email ImmigrantDisasterRelief@dss.ca.gov