Pfizer-BioNTech has named its COVID-19 vaccine "Comirnaty" after the FDA fully approved the drug.

The COVID-19 death toll in the United States reached 650,000 people this week, as the nation faces a resurgence of new cases and hospitalizations fueled by the delta variant of the coronavirus and areas with low vaccination rates.

The U.S. leads the world in virus-related deaths. Globally, nearly 4.6 million have died of COVID-19, according to Johns Hopkins data.

The grim milestone comes as the U.S. also recorded over 40 million virus cases since the start of the pandemic. The figure represents the total number of reported positive infections, though health officials believe the actual number is far higher. 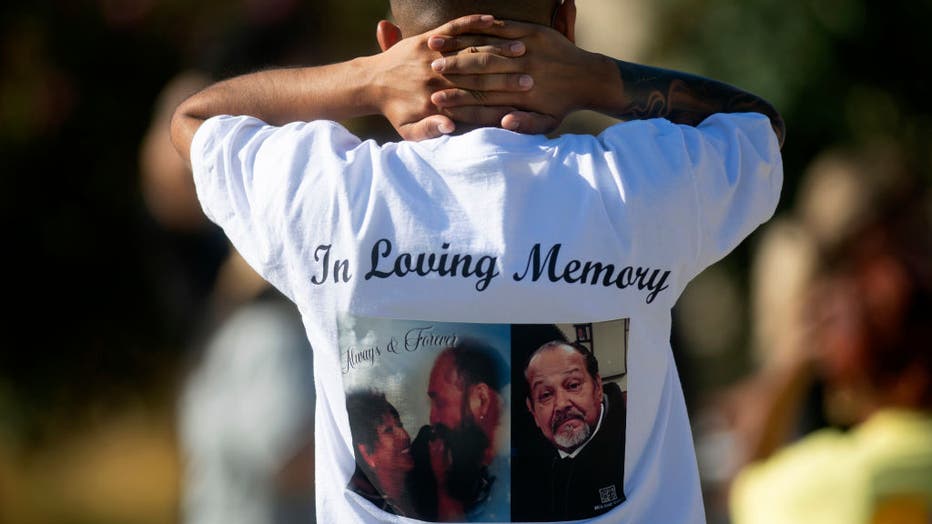 FILE - A Riverside resident remembers his aunt and uncle during a COVID-19 remembrance march honoring loved ones who died of the virus at Ryan Bonaminio Park in Riverside on Aug. 7, 2021. (Photo by Cindy Yamanaka/MediaNews Group/The Riverside Press-E

The country is facing a new challenge as the highly contagious delta strain continues to spread and millions of Americans remain resistant to getting a COVID-19 vaccine. After declining in the spring, cases and hospitalizations began to rapidly increase this summer — largely among the unvaccinated — and the country is now seeing figures not seen since January.

Over Labor Day weekend, the U.S. saw nearly four times as many COVID-19 cases compared to the same time period in 2020, according to the University of Oxford.

On Sept. 5, 2020, the country’s weekly average number of new daily COVID-19 cases was 41,488, data shows. A year later that number rose to 163,728 — nearly four times the amount. Deaths were also nearly twice as high compared to a year ago, according to the same chart.

But vaccination rates are also increasing. The U.S. administered more than 826,000 doses on Tuesday, compared to 513,000 in early July, according to Our World in Data, a collaborative project between researchers at the University of Oxford and the nonprofit Global Change Data Lab.

Nationwide, 75% of U.S. adults have now received at least one dose of a shot and 64.3% of adults are fully vaccinated to date, the U.S. Centers for Disease Control and Prevention reports.

The CDC’s vaccine tracker also shows that among Americans 12 and up who are currently eligible to receive a vaccine, 62.3% of the population is fully vaccinated.

U.S. health officials have continued to push for vaccination, often saying deaths and serious illness from the virus are almost entirely preventable because of the vaccines. U.S. Surgeon General Vivek Murthy previously declared misinformation about COVID-19 vaccines a threat to public health.

The FDA warns people not to take the drug ivermectin, used to treat parasites in livestock, to treat or prevent COVID-19.

In Idaho, public health officials this week announced that they activated "crisis standards of care" allowing health care rationing for the state's northern hospitals because there are more COVID-19 patients than the institutions can handle. The state has one of the lowest vaccination rates in the country, and cases have skyrocketed in recent weeks.

Several other states struggling to get their residents vaccinated amid a barrage of misinformation and vaccine hesitancy have faced a similar plight. In Mississippi, where just 40% of its 3 million people are inoculated, hospitals have also become overwhelmed.

Physicians at the University of Mississippi Medical Center, the only level one trauma center in all of Mississippi, are caring for the sickest patients in the state. The emergency room and intensive care unit are beyond capacity, almost all with COVID patients.

Dr. Risa Moriarity, executive vice chair of the emergency department, said the hospital has been forced to put beds in hallways, patients are being treated in triage rooms, and paramedics are delayed in responding to new calls because they have to wait with patients who need care.

The CDC says the current vaccines remain highly effective at preventing severe disease and death, including against the delta strain. But the agency in late July recommended fully vaccinated people once again wear masks indoors, citing emerging data showing the delta variant is more infectious and can lead to increased transmissibility when compared with other variants, even in some vaccinated individuals.

In addition to the now-dominant delta variant, experts say breakthrough infections may also be a combination of waning immunity from those who were vaccinated eight months ago and fewer community mitigation measures to stop the spread.

U.S. health officials have also announced plans to administer COVID-19 booster shots to all Americans to shore up their protection, pending U.S. Food and Drug Administration and CDC approval.