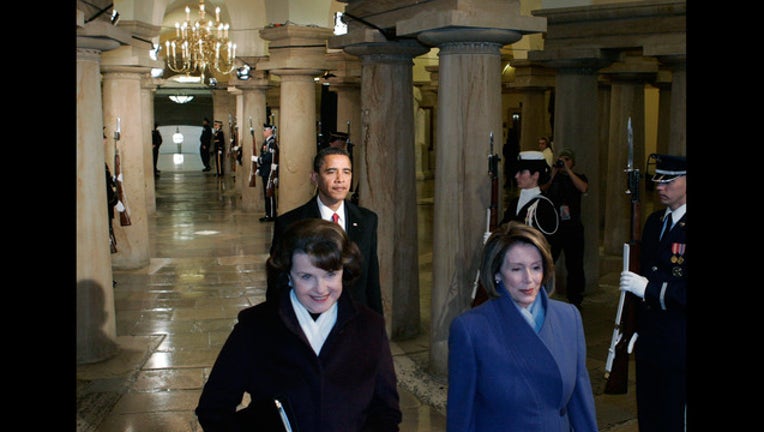 By CHRISTINA A. CASSIDY
Associated Press

ATLANTA (AP) -- Inside a classroom at a community college in Dallas, about two dozen women took turns sharing their names, hometowns and what they hoped would be their future titles.

It was part of a training held by EMILY's List, an organization dedicated to electing women at all levels of government who support abortion rights. One of the presentation's PowerPoint slides flashed a mock advertisement on the projector screen: "Help Wanted: Progressive Women Candidates."

A record number of women appear to be answering that call, fueled largely by frustration on the Democratic side over the election of President Donald Trump and energized by Democratic women winning races in Virginia in November. Experts say 2018 is on track to be a historic year, with more women saying they are running at this point than ever before.

"I've never seen anything like this," said Stephanie Schriock, president of EMILY's List. "Every day, dozens more women come to our website, come to our Facebook page and say, `I am mad as hell. I want to do something about it. What should I do now?"'

In the four weeks after the 2016 election, 1,000 women came to the group's website to learn about running for office. That number has now surpassed 26,000. By comparison, the group was in contact with 960 women for the previous election cycle.

Whether all that enthusiasm will result in full-fledged campaigns and translate to gains in the number of women elected to office remains to be seen.

Although women are more than half the American population, they account for just a fifth of all U.S. representatives and senators, and one in four state lawmakers. They serve as governors of only six states and mayors in roughly 20 percent of the nation's most populous cities.

For Sarah Riggs Amico, the executive chairwoman of a major auto hauling company, last year's Women's March in Atlanta ignited her interest in running for office.

"It was something that really lifted me up and made me want to demand better from my government," said Amico, who recently announced plans to run for lieutenant governor in Georgia.

Sol Flores has been walking in marches with her mother in Chicago since she was a little girl, but never thought she would run for office. Now 44, Flores said she was enraged by policies put forward by the Trump administration and decided to jump into a crowded Democratic primary for Illinois' 4th Congressional District.

Flores said her network of friends has been crucial to helping her navigate the realities of being a first-time candidate and the challenges of gathering signatures for qualifying and fundraising.

"Women are really good at this, saying, `Let's sit down and figure this out. You raised your hand, and let's win. Let's go to Washington, D.C.,"' said Flores, the executive director of a nonprofit helping homeless families and at-risk youth.

The last time the U.S. saw a surge in women running for office was 1992, in the wake of Anita Hill's testimony before an all-male U.S. Senate committee weighing the nomination of Clarence Thomas to the U.S. Supreme Court. It was called the "Year of the Woman" because women were elected to the U.S. House and Senate in record numbers.

The number of women in office has held steady in recent years, but experts say conditions are ripe for an increase in 2018 -- especially if more politicians are forced to step down or retire amid the growing (hash)MeToo movement that began with accusations of sexual misconduct against Hollywood mega-producer Harvey Weinstein.

One U.S. senator and four congressmen have so far announced plans to retire or not seek re-election following allegations against them, presenting a prime opportunity for women to compete for their open seats. For example, seven women have expressed interest in an April special election for an Arizona congressional seat.

The increase in women candidates is largely being seen in U.S. House and governor's races next year and driven primarily by Democrats, said Debbie Walsh, who leads the Center for American Women and Politics at Rutgers University. In addition to the 50 Democratic and 10 Republican congresswomen expected to run for re-election, there are 183 Democratic women and 14 Republican women running in primaries to challenge their current U.S. representative.

These can be uphill races, but many of the women running say they were encouraged by what happened in Virginia in November, when 30 percent of the women who challenged their state representative won.

Katie Hill is among those seeking to oust her local congressman, Republican Rep. Steve Knight in California's 25th Congressional District, a key Democratic target this year.

As an advocate for the homeless, Hill recalled the joy she felt on the night of the 2016 election when voters in Los Angeles passed a $1.2 billion bond measure for housing and services for homeless people and those at risk of becoming homeless. But that was quickly tempered by the outcome of the presidential election.

"November made us all realize that our country is not where we need to be," Hill said. "And that's the point when people start to stand up and say, `If no one else is going to fix, I'm going to."'

It's not just Democrats. First-time Republican and Libertarian women candidates are also jumping into the mix.

Republicans launched an effort in 2012 that is focused on electing women. Under the "Right Women, Right Now" program, 390 new GOP women have been elected since then.

"Twenty-five percent of state legislators are women, and that's clearly insufficient," said Matt Walter, head of the Republican State Leadership Committee. "That's a Democratic and Republican number, and something we really felt strongly was something we needed to change."

Tiffany Shedd, a lawyer for small businesses who lives on a farm in Eloy, Arizona, said she was talking with her husband one evening earlier this year about the importance of having someone representing them in Congress who will fight for rural communities. She said he challenged her to run.

"I said, `I can't run. What's a person from a little town in Arizona doing running for Congress?" Shedd said. "And then I thought, `Wow -- that is exactly what we need."'

She will be running in the Republican primary in the hopes of challenging Democratic Rep. Tom O'Halleran in November.

On the state level, 36 governor's races will be contested in 2018. The Center for American Women and Politics says 49 Democratic women, including two incumbents, and 28 Republican women have indicated they will run for those seats. There has never been more than nine women serving as governor at the same time.

Even if all the women who have reached out to groups such as EMILY's List do not end up running next year, they are expected to play key roles in supporting those who do.

"This is the next decade of candidates," Schriock said.