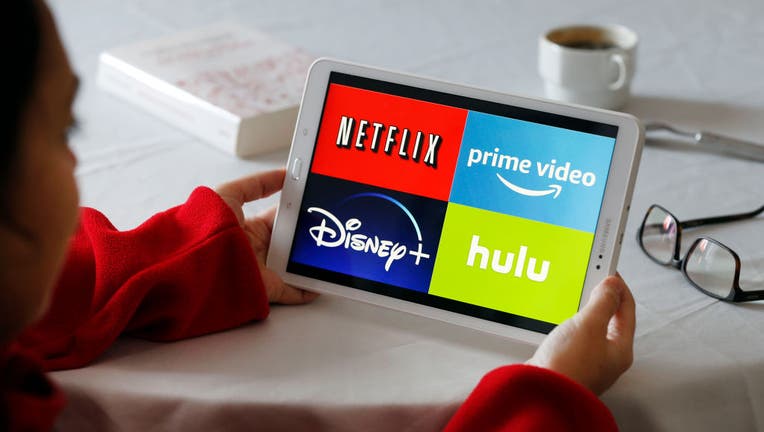 In this photo illustration, the logos of media service providers, Netflix, Amazon Prime Video, Disney + and Hulu are displayed on the screen of a tablet on Nov. 20, 2019, in Paris, France. (Photo by Chesnot/Getty Images)

NEW YORK - This summer has been a breakthrough for streaming, with the time viewers spent watching services like Netflix and Hulu outpacing broadcast and cable television networks in July for the first month ever.

Viewers spent 35% of their time with streamers, 34% on cable networks and 22% watching broadcast television last month, the Nielsen company said Thursday. Video on demand or DVD playback accounted for much of the other time.

RELATED: Watch LiveNOW from FOX, a non-stop stream of breaking news, live events and stories across the US

July is an unusual month — broadcast TV is essentially on vacation with little live sports or scripted programming and a prime-time schedule clogged with game shows — but it's a clear indication of how rapidly the business is changing.

"It was inevitable," said David Bianculli, professor of television studies at Rowan University and critic on NPR's "Fresh Air." "I knew it had to happen, but I didn't know it would happen as quickly as it did."

Streaming's audience share in July was up 23% compared to July 2021, Nielsen said. Broadcast television's share was down 10% and cable down 9%.

Streaming services learned from what cable did in its infancy, using broadcasting's quiet summer months to put forward some of their best programming, said Brian Fuhrer, Nielsen's senior vice president for product strategy and thought leadership. New episodes of "Stranger Things" alone on Netflix accounted for 18 billion minutes of streaming, while "Virgin River" and "The Umbrella Academy" also did well.

Netflix is still the top streamer, but it no longer dominates the field the way it once did. In July, Hulu had strong numbers for "Only Murders in the Building" and "The Bear," while Amazon Prime hit with "The Terminal List" and "The Boys."

With pandemic-related pauses in shooting schedules now largely over, the streamers have a backlog of fresh material, Fuhrer said.

Many viewers became familiar with streaming and added it to their media diets during the pandemic, he said. They haven't looked back. Each week in July had more total minutes of streaming than any other weeks Nielsen has ever counted, with the exception of the week between Christmas and New Year's last year.

From DVDs to Academy Awards: The history of Netflix

Netflix paved the way for countless other entertainment streaming services to follow.

The return of football games and a new season of fresh scripted shows this fall should boost the broadcast networks, Fuhrer said.

‘Game of Thrones’ returns: Everything you need to know about HBO’s ‘House of the Dragon’

Yet it's hard to see them pushing back to a level of dominance approaching anything in the past. For one thing, media companies that own broadcast networks also have sister streaming services — CBS and Paramount+, NBC and Peacock, for instance — and generally see streaming as the future, he said.

"The networks have collectively decided not only that streaming is the future, but they can't wait to get there as fast as they can," Bianculli said. "They're not doing anything to slow down the charge."

Fuhrer said it will be interesting this fall when large football audiences return to broadcast TV to see whether those networks will spend a great deal of time promoting their own shows.

"This month and the next two to three months may be the most pivotal in the history of television in terms of all the media companies and their strategies," he said.

Some business experts believe streaming services are in a pre-shakeout period, with several trying to establish themselves before the industry learns there are only so many outlets consumers are willing to pay for. The result may be a period of consolidation.

"It’s a great time to be a TV viewer," Bianculli said, "and I can’t imagine there will ever be a greater time to go into television creatively."