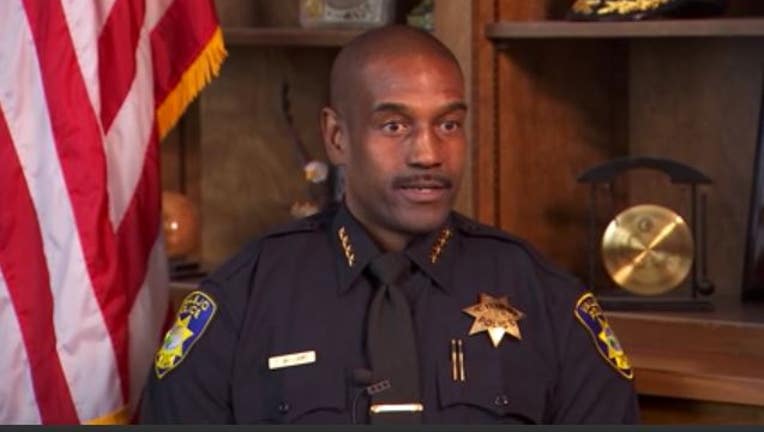 VALLEJO, Calif. - Nineteen people have been killed by police in the last 10 years. Fourteen officers have been involved in multiple shootings. And $15 million has been paid out in recent lawsuits.

It’s been a decade of trouble for the Vallejo Police Department, leading to a fractured relationship with the community. And now as crime is surging to levels not seen in a quarter century, police need the community’s help more than ever.

Vallejo Police Chief Shawny Williams was sworn in as the new head of the beleaguered agency almost one year ago. He sat down for an extended interview with KTVU, pledging to steer the department in a new direction even as scandals continue to unfold under his watch.

PART 1: Vallejo police responds to a decade of police killings

“I am committed to transparency and accountability, especially when it involves a loss of life,” Williams said. “One of the things we want to do is reform our department so we can do better, and that our mission is to protect and save, and so that’s what we’re focused on.”

Since becoming chief, Williams has instituted a suite of reforms that are best practices in modern policing. He banned controversial choke holds. There’s now a mandatory body-worn camera activation policy and a clearly defined de-escalation policy.”

But whether the chief will make good on holding officers accountable when they violate policy will be the ultimate test on whether he can win back community trust.

“I don’t think there’s going to be real reform there with piece meal and half-hearted movement,” said Adante Pointer, an attorney who represents the families of several people killed by Vallejo police. “It’s going to take bold action. It’s going to take in my opinion, kicking out all the bad actors and all the enablers for there to be the chance of a new day in Vallejo.”

Williams recognized that “it’s my job as chief to hold our people accountable.” He’s sought to fire Ryan McMahon, who was involved in two fatal police shootings, and placed others on paid administrative leave while separate administrative and criminal investigations play out in other shootings.

“When corrective action is needed I will take those corrective actions,” he said. “I’ve made recommendations for termination for officers that are not complying with our policy and I will continue to do that.”

PART 2: Vallejo police responds to a decade of police killings

But none of the officers who used deadly force over the past decade were ever criminally charged by the Solano County District Attorney’s Office, and in many of the cases, the internal affairs department recommended simply retraining.

Williams said he’s moving forward with 45 reforms recommended in a report issued by the OIR group in May, including adopting independent oversite and holding community meetings after police shootings.

He’s hoping to rebuild trust as violent crime is surging in Vallejo. There have been more than 200 shootings and 22 homicides so far this year –  violence not seen since the mid-1990s.

At the same time, police have solved only 36% of the homicides.

“There’s a lot of community engagement things that we’re doing that I’m excited about that’s going to bring us closer together to have those dialogues -- those important dialogues,” he said.

In order to start building those relationships, Williams has to address his officers’ past controversial actions. And many are still on the force.

The City of Vallejo this month settled a civil lawsuit with the family of Ronell Foster for $5.7 million. He was riding a bike in without a light in February 2018, when McMahon chased him into an alley and fatally shot him after a scuffle broke out.

Then a year later, McMahon was one of six officers to fatally shoot Willie McCoy, who was unconscious in a Taco Bell drive through with a gun in his lap. Police shot him seconds after he awoke.

McMahon's attorney did not respond to request for comment.

“No loss of life is acceptable,” Williams said. “The vast majority of our officers are hard-working committed officers and they’re doing an exceptional job, and my role as a police chief is to support them and our community and I will continue to do that. But we can always do better and we strive to do better.”

While Williams wasn’t chief during the Foster and McCoy killings, he was in charge when an officer fatally shot Sean Monterrosa in June.

The officer, who sources identified as Jarrett Tonn, shot Monterrosa through the windshield of a police pickup truck within seconds of responding to a burglary call.

The department said the officer mistook a hammer in Monterrosa’s pocket for a gun. Williams said he’s still waiting on the results of separate criminal and administrative investigations.

“Once I get the facts back from both those investigations, I can make a determination on that case,” he said.

The chief has also called on the state Department of Justice to investigate after the truck’s windshield was discarded.

But while the police killings have damaged relations with the community, stunning accusations by a former captain have set them ablaze.

Multiple officers who used deadly force are accused of bending the corners of their badges to mark the events. The scandal was first uncovered by the non-profit, Open Vallejo.

“Anyone who would bend the badge in the celebration of the killing of a human being is despicable and doesn’t deserve to wear our patch,” Williams said. “I’ve always said no one dislikes a bad cop more than a good cop.”

While the investigation plays out, the officers are still employed, a fact that doesn’t sit well with community members in Vallejo or the families of those police have killed.

“They have a murder club,” Pointer said. “All of those officers should have been walked out of police department that day. How dare you celebrate taking somebody’s life.”

Foster’s family is one of many still reeling from the loss. They continue to seek accountability from the department.

“People can’t live in fear of the people that are supposed to protect and serve them, bottom line, bottom line,” said Al Polk, Foster’s uncle.

KTVU asked the chief to respond to Polk’s comments.

“I would say that it’s a new day and we are taking steps in the right direction and we need your support,” Williams said. “I understand your loss and I am very empathetic for that but I can’t change the past but I can impact the future. And that’s what we’re striving to do.”