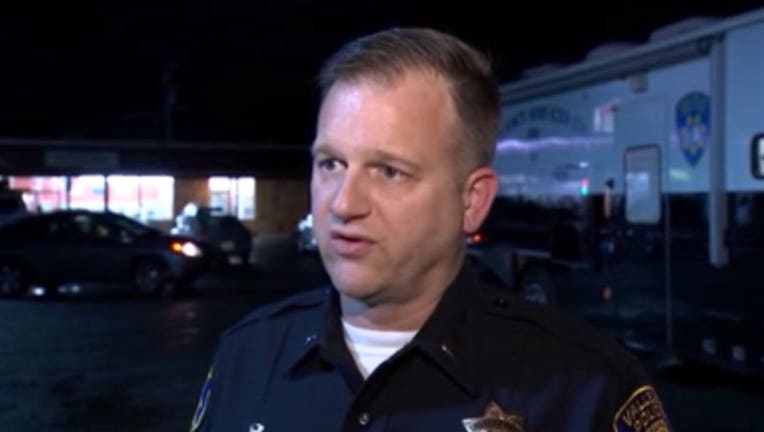 Vallejo Police Department Lt. Michael Nichelini is seeking $7.5 million in damages on behalf of himself and the police officers association.

VALLEJO, Calif. - The president of Vallejo's police union filed a federal civil rights lawsuit Friday alleging he has been subjected to harassment, retaliation and intimidation by top-ranking Vallejo city staff, including the city's police chief.

Lt. Michael Nichelini filed the lawsuit in U.S. District Court for the Eastern District of California on behalf of himself and the Vallejo Police Officers' Association. The lawsuit seeks $7.5 million in damages.

According to the lawsuit, city officials have initiated "multiple baseless internal affairs investigations into the union's protected union-related activities and the City's continued threats and actions to terminate Lieutenant Nichelini's employment."

The lawsuit alleges councilmembers are responsible for the named city hall officials and the police department.

Nichelini claims that between January and December 2020 he was "subjected to at least five instances of harassment, each intended to interfere with the VPOA's concerted rights."

Nichelini was served with a notice of termination on Dec. 21, two weeks after he sent an email to San Francisco columnist Otis Taylor expressing happiness that Taylor was leaving the publication. At the time, Taylor and the San Francisco Chronicle said the email was a veiled threat toward the veteran journalist who had investigated the police department and police union for several years.

"Looks like 2021 will be a little bit better not having your biased and uniformed (sic) articles printed in the newspaper that only inflame the public," Nichelini wrote in his email. "You have never looked for the truth in any of your writings. We will warn our Georgia colleagues of your impending arrival."

City officials did not immediately respond Friday afternoon to a request for comment on the lawsuit.

Nichelini was placed on paid administrative leave in July 2020 for allegedly destroying a piece of evidence following the fatal officer-involved shooting of Sean Monterrosa on June 2. The officer, who shot and killed Monterrosa outside a Vallejo Walgreens, fired his AR-15 rifle through the windshield of an unmarked Vallejo police vehicle that was responding to reports of looting at the store. Following the shooting, the windshield was removed from the vehicle, and destroyed.

Nichelini argues the discipline levied against him was in response to his filing of a grievance in May 2020 on behalf of the union against the police department civilianizing the public information officer position and officer recruitment position.

"Although Defendant Williams knew President Nichelini had no knowledge of, or involvement in the destruction of the windshield, Williams nonetheless falsely accused President Nichelini of destroying evidence," the lawsuit alleges. "This action barred Nichelini from the workplace purposefully and effectively preventing him from contacting and representing VPOA members."

Nichelini claims that his suspension caused the California Department of Justice to interview him in its criminal probe regarding the destruction of the windshield.

The lawsuit also claims that both the city manager and police chief accused Nichelini of a hate crime after he emailed an image of an early 20th century Vallejo police badge to VPOA members. The badge is engraved with a Gammadion cross, or swastika. Nichelini maintains that when the badge was engraved in 1907, the image "bore no negative connotations."

He faced further discipline in September 2020 -- a year after he was caught filming civil rights attorney Melissa Nold during a Vallejo City Council meeting a year earlier. Nichelini said the punishment was in retaliation for his filing of a grievance against the city for discriminating against VPOA members.

Nichelini claims in the lawsuit that he "used his cell phone to record portions of the meeting he was concerned would not be captured by his body-worn camera."