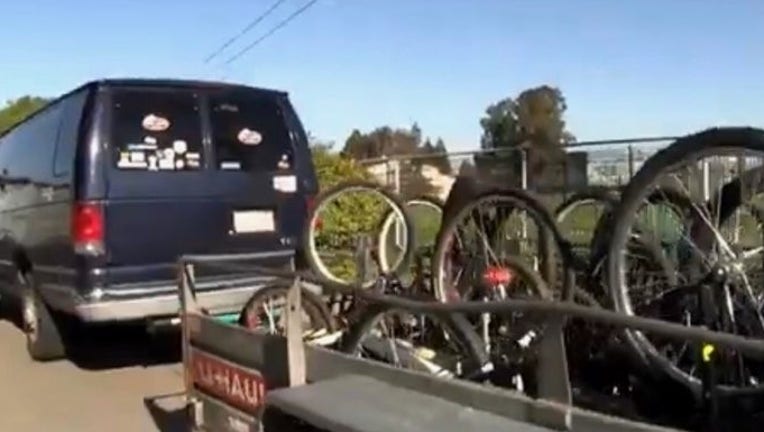 OAKLAND, Calif. - A program that teaches East Bay school children how to ride bikes has been put on hold because the van used to transport the bicycles and safety gear was stolen earlier this week, the founder of the nonprofit program said Wednesday.

Howard Cato founded "Flood the Streets with Bikes" a few years ago following the success of Bay Area BMXers, his nonprofit organization that sponsors a bicycle race team and mentors underprivileged children.  He’s helped hundreds of students learn how to ride bikes and understand the importance of safe cycling and exercise.

On Monday morning, Cato said he walked out of his East Oakland home and found that his blue 2001 Ford Econo e-E350 van was not where he had parked it.

“At first I thought, ‘maybe I parked around the corner.’ Finally reality clicked in. (The) van is gone, someone stole it,'' he said.

Cato said there weren’t any bikes inside the van, but it did hold some bike tools, pop-up tents he uses at events, air pumps and some personal items. 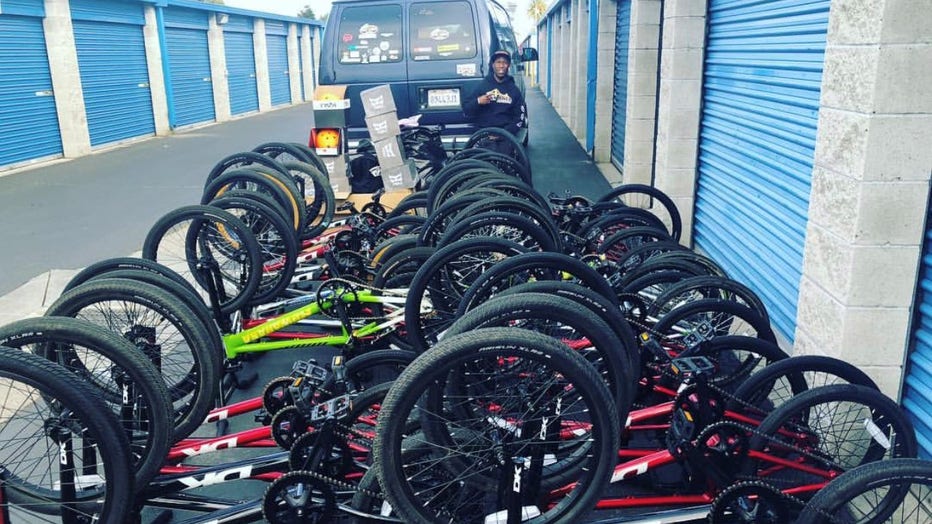 “It’s a terrible thing that this is happening right now because I count on that van to get me to my school programs, my bike races that we go to with the (Bay Area BMXers) team and a lot of the community stuff that I do in the  Bay Area, Oakland, Richmond,  all over.”

Cato said that he was scheduled to bring his fleet of bikes to Piedmont Elementary School Wednesday as part of his “Flood the Streets with Bikes” program, but he had to put the visit on hold.

“Right now I had to postpone some stuff to figure out what I’m going to do in the next few weeks,’’ he said.

Cato said he’s not mad at the person or persons who stole the locked van and hopes they will do the right thing and return it to where it was parked on Monday.

“I’m praying that we can get this van back,’’ he said, adding that the theft will not deter his good works.

“With everything that is going on in the world right now, I’m trying to do a lot of positive stuff,’’ Cato said. “When this came along it (took) a little bit of the shine off of it, but I’m not going to let this mess up the positivity that I put out. I’m going to continue to do it.”

Cato, 51, became a community volunteer and started his nonprofits after many personal struggles.

When he was 23 years old, he lost a lung in a shooting that also temporarily paralyzed him from the waist down. Doctors weren’t certain if Cato, a long-time BMX bike racer, would ever walk--or ride--again.

“I sat up in the hospital for almost 2 ½ months,’’ said Cato in a documentary about his life. “I had a lot of things to think about, what I wanted to do, how I was going to change my life around. Everything that kept coming through my head was with BMX, the old days, that’s all I was thinking about.”

Cato learned to walk again and once out of the hospital, got back on a BMX bike and began competing again. He left the street life that led to his shooting and taught his 4-year-old son to ride; the boy went on to become a professional racer.

Later on in lie, Cato wanted to use his experience in biking and competing to inspire the next generation to share his passion.

A prior gofundme page that was established two years ago to help Cato with his nonprofits is now accepting donations to help Cato possibly purchase a new van. To donate, go to https://www.gofundme.com/f/flood-the-streets-with-bikes