The couple was seen in surveillance video near Meekland and Lewelling in San Leandro tracking Bruno after he got lost from the family's yard.

In the video, you can see them following the pup as he ran from them. They eventually caught up with Bruno, the woman grabbed him, and they hurried off in a silver Hyundai Sonata.

Owner Denise Esparza told KTVU she is absolutely heartbroken over the loss.

"I treat him like our son." said Esparza. "I’ve been crying all day the last couple of days."

Bruno, who turns 1-year-old on Sept 11, is gray and white and weights about 28 pounds. He has a small scar on his forehead, an underbite and a red patch on his bottom lip. 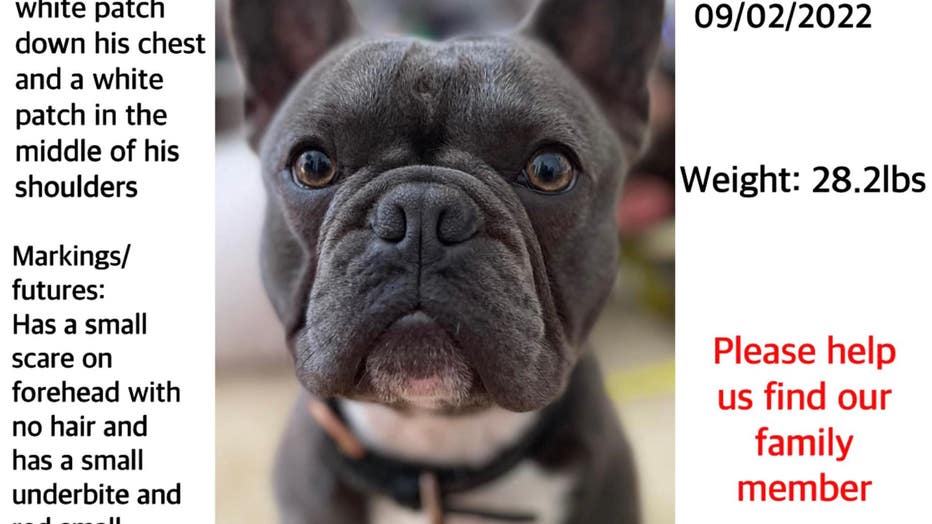 "Knowing it’s so hot, I’m sorry, I get so emotional," Esparza said. She said her kids repeatedly ask when Bruno is coming home. They are also worried because he has a special diet.

In the Bay Area, multiple French bulldogs have made headlines for being stolen. In fact, last month a boy who was robbed of the family pet at gunpoint in Oakland.

There have been numerous other instances of the popular breed's owners becoming victims of crime.

If anyone spots Bruno, they are asked to call Alameda County Sheriff's Office.