KETCHICAN, Alaska - The U.S. Coast Guard has been known for making a variety of rescues at sea. But a crew in Alaska may have experienced its first ever rescue of a wayward and distressed deer that apparently got too far from shore. 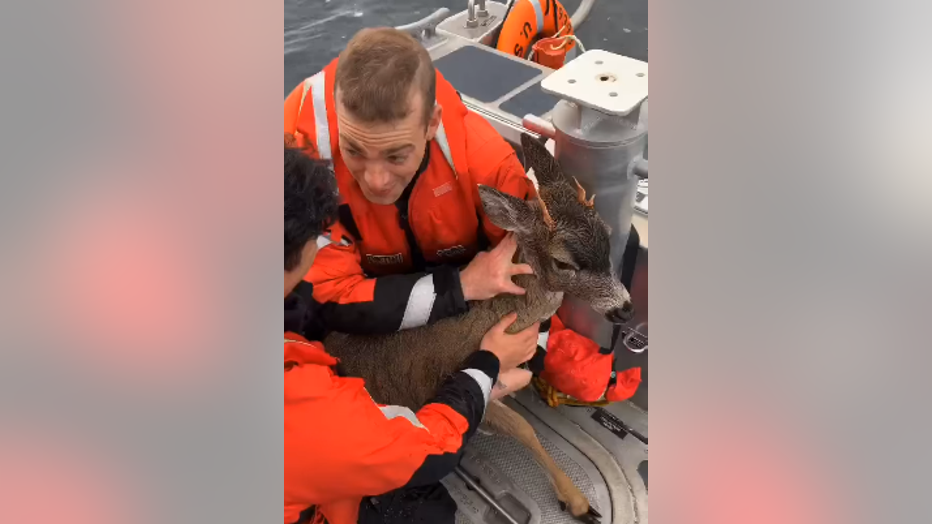 The rescue happened during a routine patrol in Ketchikan’s Clarence Strait, off southeastern Alaska.

The crew was surprised to see the deer so far offshore. Video showed the Coast Guard’s boat move closer to the animal as the deer slowly made its way to the vessel.

“We were out on patrol in Clarence Strait and we saw a deer from afar,” said Petty Officer 2nd Class Isaak Linkous. “We stopped and the deer swam straight up to the boat. It was too far from land and got caught in the current so we brought it on board,” he added.

Two crew members helped the deer climb onto the boat.

The animal was clearly shaken up and the crew was clearly both surprised and amused by the unusual find, as officers held on tightly to the deer so it wouldn’t escape. One officer was heard laughing nervously as the deer squirmed in their grasp. The officers were also seen petting and trying to comfort the deer as it’s heard crying.

Once the boat arrived back on shore, the crew managed to get the frightened deer out of the boat. But the animal struggled a bit to shake off its sea legs as it stood on the pier wobbly and unable to run off for a bit.

The Coast Guard said the temperature of the water was 49 degrees and the air temperature was a cold 43 degrees.

“C’mon, you gotta walk it off. You got to walk it off,” a crew member was heard encouraging the deer on the video.

The deer eventually made its way back to land. Officials said it didn't appear to be injured.