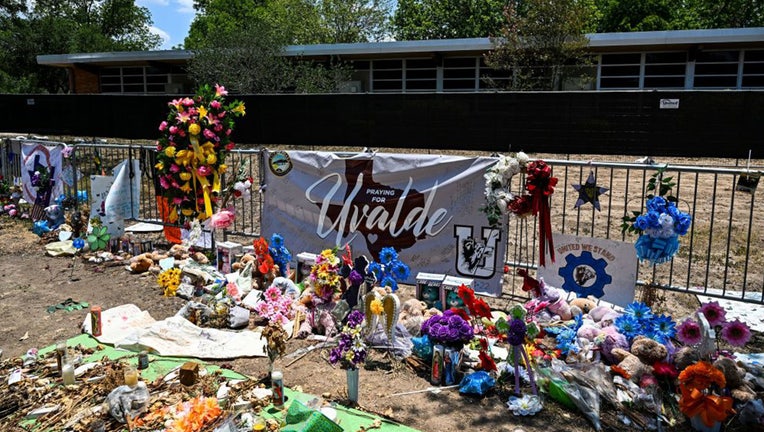 FILE - Mementos decorate a makeshift memorial to the victims of a shooting at Robb Elementary School in Uvalde, Texas, on June 30, 2022. (CHANDAN KHANNA/AFP via Getty Images)

AUSTIN, Texas - Surveillance footage captured the gunman in the Uvalde school shooting enter the building with a AR-15 style rifle and later shows officers in body armor milling in the hallway outside the fourth-grade classrooms where 19 children and two teachers were killed.

The video published Tuesday by the Austin American-Statesman shows parts of the nearly 80 minutes that passed between the gunman walking into Robb Elementary through an unlocked door and the time when his death put an stop to America's deadliest school shooting in nearly two decades.

The four-minute video from May 24 shows two officers approach the classrooms not long after the gunman and then run back amid the sounds of gunfire. It shows officers, some with shields and rifles, massing in the hall before they breached the room and killed the gunman about an hour later.

(Warning: Some may find the following video disturbing. Viewer discretion is advised.)

The edited footage was published as Texas lawmakers investigating the massacre are preparing to release their findings and show body-camera and surveillance footage to mourning families and other residents of Uvalde.

Officials said the 77 minutes of footage they are preparing to release this weekend does not contain images of children. The video footage has received renewed attention over the past week as anger mounts in Uvalde over an incomplete account about the slow police response and calls for accountability seven weeks after the worst school shooting in Texas history.

Rep. Dustin Burrows, a Republican leading an investigation into the shooting, said that the video and findings from a preliminary report will be shown Sunday in Uvalde to residents and distributed publicly soon after. Later in the day he tweeted, "while I am glad that a small portion is now available for the public, I do believe watching the entire segment of law enforcement’s response, or lack thereof, is also important."

As the gunman approaches the classrooms a child down the hallway can be seen poking their head around the corner and then running back while shots ring out. Later, about 20 minutes before police breach the room, the video shows a man wearing a vest that says "sheriff" use a hand sanitizer dispenser mounted on the wall.

Burrows said his committee has interviewed more than 40 people behind closed doors over the last several weeks, including law enforcement who were at the scene. He has defended the committee talking with witnesses in private to elicit more candor about what happened.

The head of the Texas Department of Public Safety says three minutes after a gunman entered a school where he slaughtered 19 elementary students and two teachers, there was sufficient armed law enforcement on scene to stop the gunman. Law enforcement authorities also allegedly never checked the classroom door to see if it was locked.

State police said last week that Uvalde County District Attorney Christina Busbee had objected to releasing the video. Busbee has not publicly addressed those claims and did not immediately respond to a message seeking comment left with her office Tuesday.

State and local officials have previously cited the prosecutor’s ongoing investigation as a reason they could not release information about the shooting, including body camera footage.

State authorities have cast Arredondo as the on-scene commander and said his errors delayed police killing the gunman. Arredondo, however, has told the Texas Tribune he didn’t consider himself to be in charge of operations and that he assumed someone else had taken control of the law enforcement response. He did not have a police radio at the time.

The roles of the ranking on-scene officers from other agencies, including the Texas Department of Public Safety, remain unclear. Local officials in Uvalde have accused the state police of repeatedly putting out inaccurate information about the shooting while glossing over the role of its own troopers.