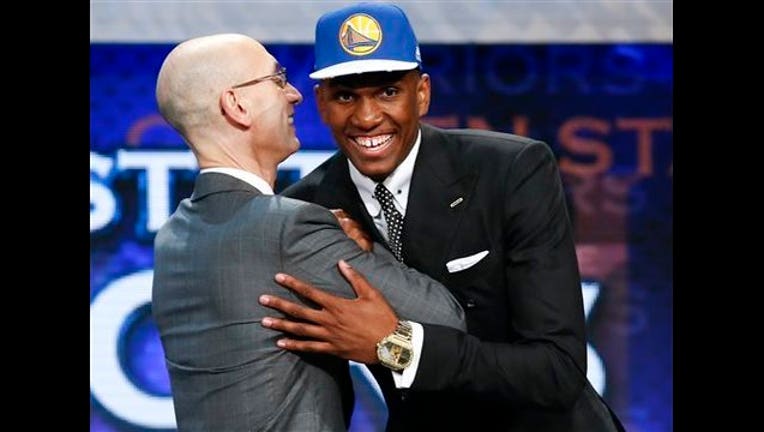 OAKLAND, Calif. (AP) -- The Golden State Warriors drafted UCLA forward Kevon Looney with the 30th and final pick of the first round.

Six days after the parade celebrating their first NBA championship in 40 years left city streets awash in blue and gold confetti, the Warriors added the 6-foot-9, 220-pound Looney with their first draft pick in three years.

Because Golden State had one of the deepest teams in the NBA last season -- a squad built largely through the draft -- the Warriors had the luxury of drafting a player without the need for him to make an immediate impact.

Looney averaged 11.6 points and 9.2 rebounds during his only season at UCLA. Looney led all college freshmen with 15 double-doubles while helping the Bruins to the Sweet 16.

Golden State didn't have a selection in either 2013 or `14, having traded the picks away. One of those trades resulted in the Warriors getting Andre Iguodala, who was the MVP of the NBA Finals during the team's championship run.

Looney, who played power forward with the Bruins, is a physical rebounder who can also score from the perimeter. He was UCLA's best 3-point shooter last season when he shot 41.5 percent from beyond the arc.

That should make him a good fit with Golden State's Splash Brothers -- guards Stephen Curry and Klay Thompson. Curry, the NBA regular-season MVP, broke his own NBA record for 3-pointers this season with 286.

Warriors coach Steve Kerr was certainly relaxed while waiting more than three hours until Golden State made its pick. At one point he walked by where the media was assembled wearing blue shorts and a gray team T-shirt.

There had been speculation that Golden State might try to trade forward David Lee in a draft-day move, but nothing happened. Lee is entering the final year of his contract and will earn nearly $15.5 million next season.

Lee is still likely to be moved, though probably not until free agency begins in July.

One player who will be coming back to help the Warriors defend their championship is guard Brandon Rush, who exercised his player option for the 2015-16 season earlier in the day.