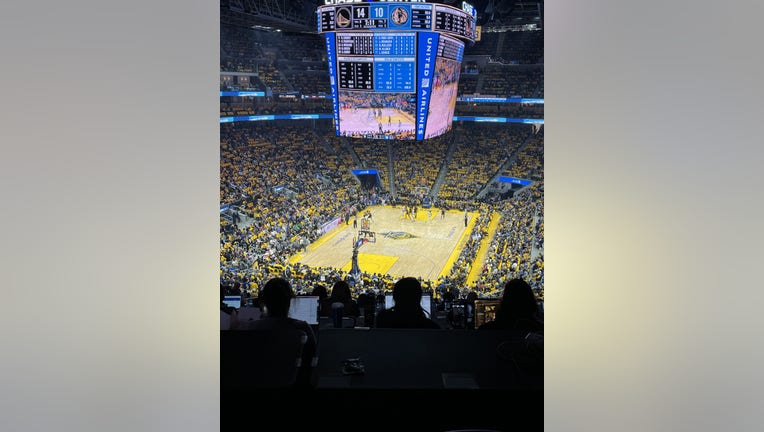 Chase Center in San Francisco on May 26, 2022: Golden State Warriors defeated the Dallas Mavericks 120-110, to advance to the NBA Finals.

SAN FRANCISCO - A peek at Golden State's practice Saturday wouldn't have suggested that the Warriors are trailing the Boston Celtics in the NBA Finals.

Stephen Curry was making most of his shots, as usual. Klay Thompson was bobbing his head in time with the music in between his own shot attempts. Draymond Green was at the other end of the floor with the forwards yelling "Oh, yeah!" at nobody in particular.

The biggest game of their season is Sunday. Say this much for the Warriors: They don't seem nervous about it.

The Celtics can take a 2-0 lead -- and absolute command -- of the NBA Finals on Sunday when they visit the Warriors in the second game of the title series. It's not must-win time for the Warriors, technically, but opening a series with two home losses would mean they'd need to pull off something nearly unprecedented to win a championship.

Boston has a similar approach. Much was made of how the Celtics didn't have any players with finals experience before the series opener Thursday night; they used a 48-18 run to pull away late and win 120-108. But moments after the final buzzer, there was no celebrating in the winning locker room -- just a reminder from Marcus Smart that, like Kerr said, the page needed to turn quickly to Sunday.

"I know it may sound arrogant, but when you play for the Celtics, the expectation is to win a championship," said Boston's Al Horford, who led the Celtics 26 points in Game 1 on Thursday night and turned 36 on Friday. "Even when I got here in '16, that was the expectation even then. That's what it is in the organization. We don't have to talk about it. We don't even talk about it at this point. We're just taking it a game at a time."

The Celtics ended Golden State's 13-game winning streak in Game 1's at home, and that means the Warriors are trailing 1-0 in these playoffs for the first time.

The Warriors led by 15 points late in the third quarter of Game 1, then trailed by 15 points in the final moments. It was only the second finals game in the last 25 years where both teams held leads of at least 15 points -- the other being Game 5 of the 2014 finals between San Antonio and Miami.

"It's the first time we've been down 0-1. It's the first time for a lot of things with this particular group," said Curry, who had a game-high 34 points in the opener. "We are here in the finals for a reason, because we figured it out along the way. If we're going to get back in this series, we've got to figure it out again."

Winning Game 1 of the NBA Finals almost always leads to a championship for the Celtics.

Thursday's victory in the series opener was the 15th time Boston has taken a 1-0 lead in the finals. In 13 of the previous 14 instances the Celtics have gone on to claim the title -- the exception being 1985, when the Los Angeles Lakers lost Game 1 148-114 but won four of the next five games to clinch the championship.

The Warriors are facing a 1-0 deficit for only the third time in Kerr's eight seasons as coach. They recovered to win the 2016 Western Conference finals over Oklahoma City, then lost the 2019 NBA Finals to Toronto.

The Warriors are 7-3 in home games that follow a home loss this season, including wins by 15, 21 and 31 points.

Game 1 was just the 10th instance of Boston's All-NBA forward Jayson Tatum taking at least 10 shots in a game and shooting 20% or less. He was 3 for 17 in the series opener -- but led everyone with 13 assists.

He tends to bounce back nicely. In those situations, he's averaged 23.6 points and 8.4 rebounds on 47% shooting in his very next outing.

The longer this series goes, the better chance there is of the Celtics setting a record for most 3-pointers in a single postseason.

The Warriors have made 235 3s so far in these playoffs, putting them on pace for one of the five highest postseason 3-point totals.

Golden State is a four-point favorite in Game 2, according to FanDuel Sportsbook. But the Celtics are now favored to win the series, with Tatum slightly favored over Curry to win the NBA Finals MVP award.
------
More AP NBA: https://apnews.com/hub/NBA and https://twitter.com/AP--Sports