Flames from the Washburn Fire are at the edge of Yosemite National Park's treasured Mariposa Grove where 500 towering sequoias are threatened. Containment on the fire dropped Monday from 25% to 22% as the fire grew by 380 acres.

Residents of towns at the edge of the Washburn Fire thanked firefighters and asked questions about efforts to get them back into their homes. The fire forced the evacuation of several campsites, and the town of Wawona where officials say about 150 people lived and where hundreds of other tourists to Yosemite National Park were staying.

"We are all in concert trying to determine the best, soonest time to get your guys home," said Boehm. "But, for me, when I don’t have to worry about you getting hit by a falling tree or a rock on your way home, that is when you will go home."

The Washburn Fire has been burning since Thursday afternoon.

By Monday evening, it had scorched 2,720 acres and containment shrank. "Containment changes," said Boehm. "This morning we were showing 25% but as we added 380 acres of burned ground today it dropped down to 22%."

Flames are at the edge of the world-famous Mariposa Grove where hundreds of towering sequoias are at risk.

"These are natural treasures and it’s a priority to protect them," said Stanley Bercovitz with the U.S. Forest Service.

Garrett Dickman, a forest ecologist said there are many iconic trees in the area, like the Grizzly Giant, that they are working to protect.

"We’ve got a sprinkler system set up around it and we are trying to give it preventative first aid, really," said Dickman. Sprinklers keep the area wet, cool flames, and increase humidity. Ground crews have been removing logs, and other pieces of large debris that could act as fuel. 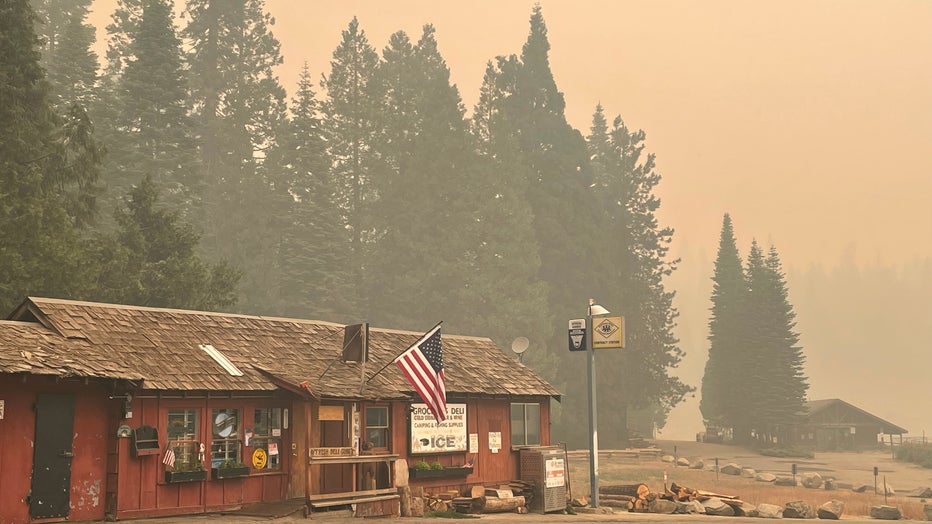 The Washburn Fire has forced the evacuation of some campsites and the small community of Wawona. Photo by the National Park Service. (KTVU FOX 2)

"We really don’t want to leave it to chance because this really is just such an iconic tree," said Dickman about the Grizzly Giant.

Another community meeting is planned for Friday.

There are no reports of any injuries or structures damaged.