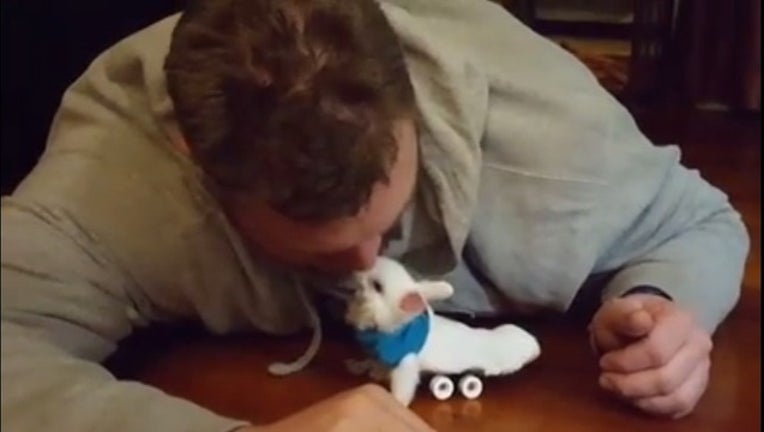 Credit: Overlook Acres/Facebook -- The bunny on its new wheelchair gives kisses to one of the workers.

(WTXF) - Good Samaritans at a barn in upstate New York offered some sweet TLC to a disabled bunny, and the video showing his progress is now going viral.

According to the Overlook Acres Facebook account, over the past few weeks, they’ve had about six litters of bunnies born.

They write that they lost many of the bunnies due to the extremely cold temperatures in upstate New York.

However, a woman named Christina Griffith took the remaining bunnies inside and bottle fed each one, according to the post.

Then, another worker found another bunny in the barn, stiff and half frozen. The bunny was brought inside and after a few days, they found him to be eating normally, but unable to use his back legs.

“It appeared he was paralyzed from his belly down,” the post reads.

“Normally this circumstance would result in putting the animals down and out of his misery but he didn’t [sic] seem to be in any pain. He managed to still pull himself around the floor and was moving faster than the other babies.”

According to the post, Griffith bought a small, $1 skateboard toy at the dollar store and created a mini-wheelchair for the bunny.

“He is as happy as can be and loves his speed,” the post reads.