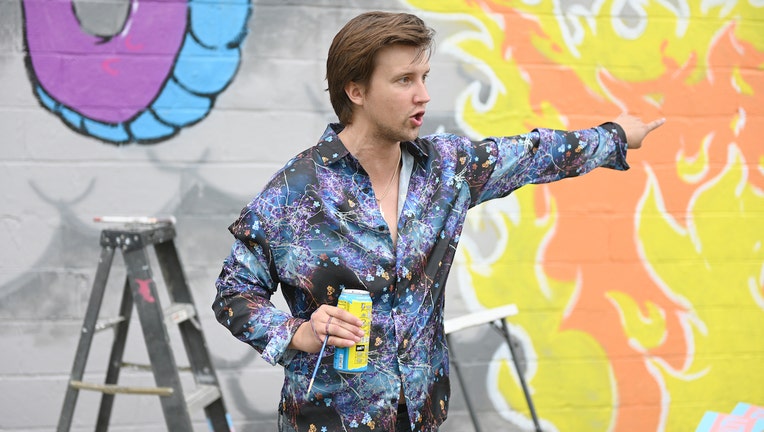 CHICAGO - Welcome back to "Welcome to Flatch" recaps! After a Halloween spooktacular that brought us the scariest image of the show — Shrub shacking up with newcomer Barb — "Glowing Up Is Hard to Do" sees the town reckoning with its newest power couple. Just starting the show? Here’s our recap of the season two premiere. Ready to binge? "Welcome to Flatch" is streaming on Hulu, and you can also watch new episodes On Demand or via FOX Now.

It’s been a wild ride, dear readers, but this week will be the last of our recaps for "Welcome to Flatch" season 2! We’re putting our coverage of the show to an early end, alas. Still, we’ll go out on a high note as the show finally sets off the Barb bomb that’s been ticking down all season and leaves us to sift through the rubble!

RELATED: Why are the ‘Jaws’ and ‘Psycho’ themes so scary? A psychotherapist explains

The aforementioned explosion came in last week’s Halloween episode, "Headless Horseman," in which Shrub (Sam Straley) finally got sick of being the third wheel in his throuple with Beth (Erin Bowles) and Mickey (Justin Linville). Of course, who was there to help him rebound but the equally lonely Barb (Jaime Pressly), who threw caution to the wind and helped the kid lose his virginity (three and a half times, if Shrub is to be believed)!

"Glowing Up Is Hard to Do" soaks us in the aftereffects of Shrub finally finding his groove, and the results are… not pretty for everyone else in the town.

Meet the new Shrub: Gone is the unkempt hair and oversized Walmart chic, replaced with feathered hair, loud silk shirts buttoned way too low and a lightning-bolt necklace resting atop his clavicle. He’s immediately more confident and infinitely more annoying — especially to Kelly (Holmes), who’s both resentful that Shrub broke "Cuz Code" (ignoring that Barb is just her boss) and that Shrub is stealing away all of her new mentor’s attention. They’ve now relegated her to gopher status, fetching everything from new underwear to Sour Patch Kid energy drinks. 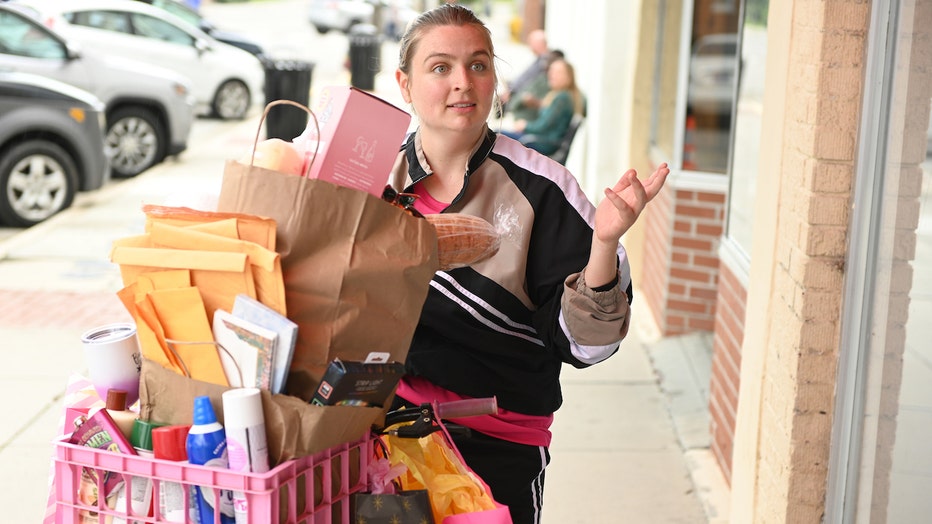 Kelly isn’t the only one squicked out by Barb and Shrub’s sickening new-couple energy and all the PDA that status entails; it’s getting to Father Joe (Seann William Scott) and Cheryl (Aya Cash) as well. They say it’s not about their own sex life drying up, but in dueling talking head interviews, they doth protest a little too much. "Did Joe say something?" Cheryl asks. "Because I can get freaky!" In a fun but truncated subplot (far too regular an occurrence for these two this season, frankly), the pair try spicing things up with a little roleplay: Joe will be an anonymous source who will give up top-secret info to Cheryl’s dogged journalist… for the right price.

WATCH FREE ON TUBI: Camilla Belle in "10 Truths About Love" — get the app

Trouble is, Joe’s really bad at roleplay, especially when his bumbling reveals to Cheryl that he doesn’t actually read her paper! He’s in the dogchicken house now.

Till Beth do us part 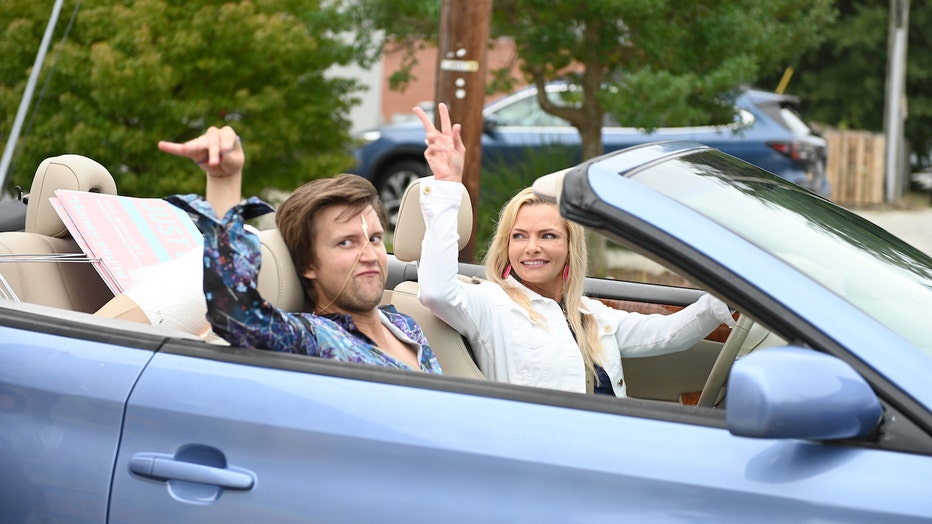 Lucky for them, Kelly’s on a mission to break up Flatch’s most ostentatious lovers. But it’ll require allying with someone she’d ordinarily never cross paths with: Beth, who naturally wants Shrub back more than ever after he’s found a hot sugar mama who wants to "deflower [him] like crazy."

WATCH FREE ON TUBI: The sex comedy classic "American Pie" — get the app

Kelly remains squicked out by Beth’s weirdness, but chooses to ally with her to defeat the greater evil of the Barb/Shrub shack-up. First, Beth tries her patented palm-tickling technique, then, falling that, the old "feed your paramour a home-made jaw of milk" trick. "I have strong feelings… and an endless supply of milk," Beth warns. Not even Kelly’s Plan B to turn Beth into Barb (complete with blonde wig and blood-red power jacket) seems to work — though Beth’s bark-laugh as "Barb" is pitch-perfectly weird. Looks like Kelly will have to deal with Barb’s love of Shrub’s front-wedgies for the foreseeable future. 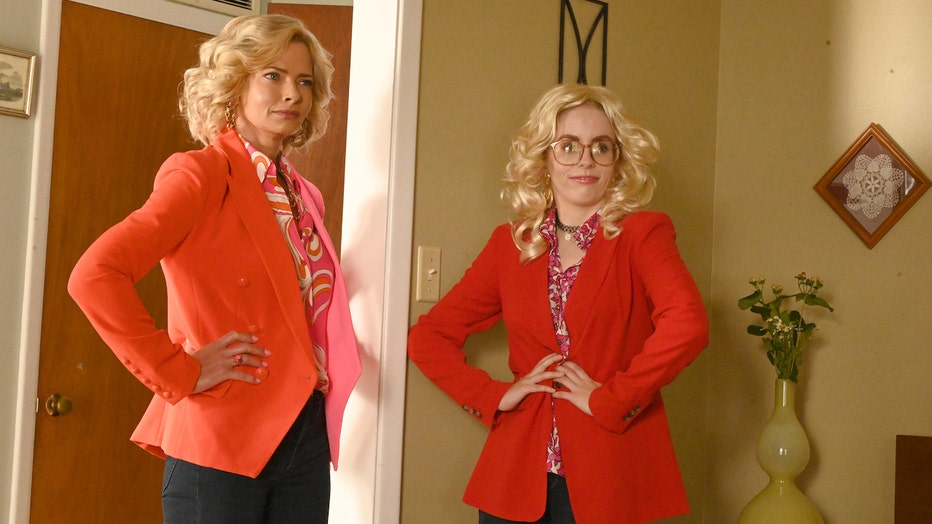 And what of the other residents of the town? Well, Shrub has started another fire of his own, after Barb commissions him to draw a (admittedly pretty killer) mural to advertise Just Barb’s Realty. This draws nearby zoomers to the town so they can go selfie-crazy on the mural, bugging Mandy (Krystal Smith) to no end. "It’s tacky; we’re not Miami," she grouses.

To fix the wall, Mandy takes the issue to the city council, with Barb defending the mural’s ability to elevate the town beyond its "good bones." (A reflection, to be sure, of her affection for the flawed-but-cute Shrub and her growing love for the town.) Still, with a tie vote on the council due to one member retiring, Mandy and Barb enter the race for the third seat — which ought to inform the rest of the season. 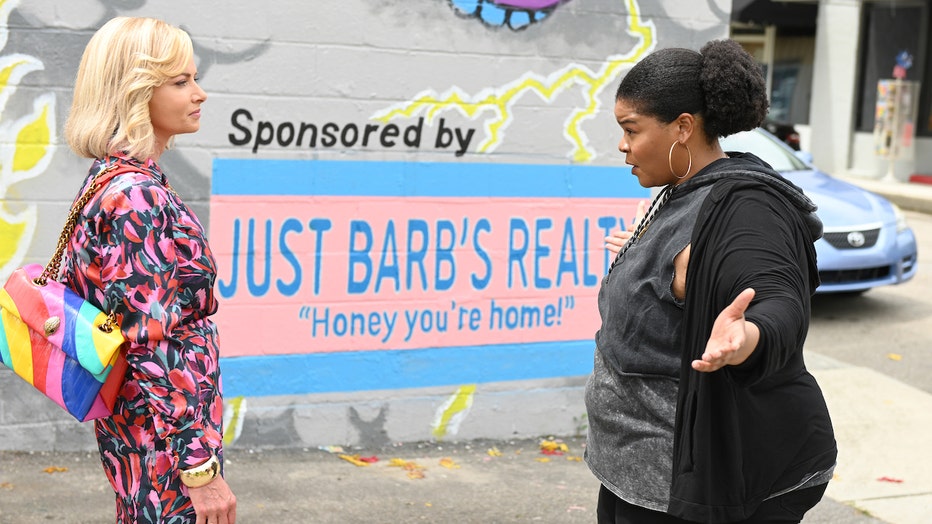 Our farewell to Flatch

"Welcome to Flatch" remains an enigma, almost too understated for its own good. Season 1 took its time to get moving. Still, by the end it had molded itself into a quietly charming look at a specific slice of modern American life most sitcoms don’t give a second thought — the oddball quirks of an impoverished rural town, from the perspective of the everyday citizens who give it its color.

Shrub’s mural, and the trouble it stirs up, serve as a fitting metaphor for the problems of the season as a whole. In an attempt to inject some flash and pop into "Flatch" with Barb, the show has quickly sidelined many of the faces that made the first season so charming. 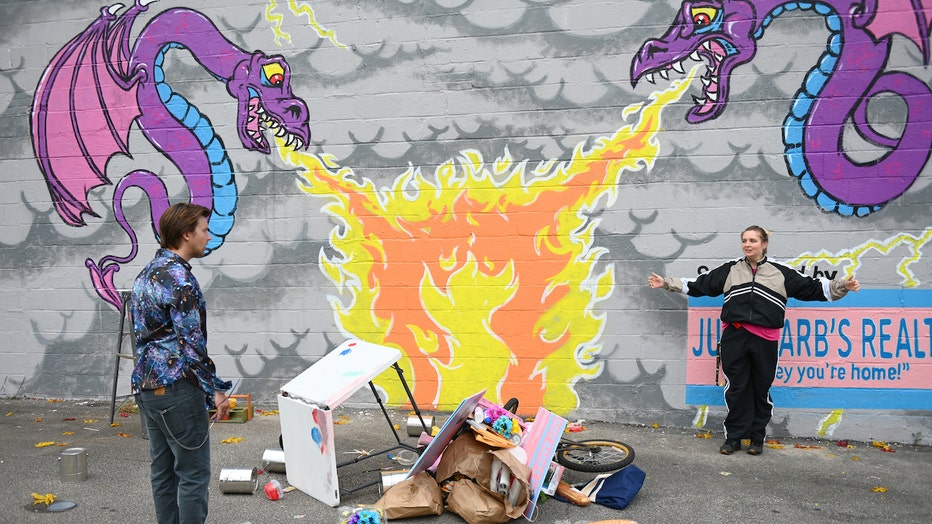 Yes, Kelly and Shrub have new angles to play, and their disparate aspirations reflect off of Barb’s failed big-city star pretty well. (Holmes and Straley remain aces in their roles.) Still, it’s hard not to miss the days when Father Joe and Cheryl had more room to maneuver, their relationship rut reflecting the writers’ inability to figure out new notes to play for them. And please, someone should give Mandy her own spinoff; she’s operating on another genius-level frequency as the rest of the show, and Smith deserves the space to grow.

WATCH FREE ON TUBI: The 1970's throwback "Dazed and Confused" — get the app

While we won’t be covering the rest of the season in these recaps, I’m optimistic that "Flatch" will climb out of its rut, figure out what to do with Barb and restore balance to its interesting, expanded cast of characters. And we hope you enjoyed these recaps as we wrote them! Hopefully, we’ll see you for season three.

About the writer: Clint Worthington is a member of the Chicago Film Critics Association. He is the founder and editor-in-chief of The Spool and a Senior Staff Writer at Consequence. You can find his other work at Vulture, Nerdist, RogerEbert.com and elsewhere.

Your next comedy binge: "The Freak Brothers," streaming free on Tubi

The Freak Brothers (2021): Smoke 'em if you got 'em! Pete Davidson, Woody Harrelson and John Goodman lead the voice cast of this adult animated stoner comedy based on Gilbert Shelton’s cult classic comic, "The Fabulous Furry Freak Brothers." The series follows three 1960s hippie stoners who smoke a magical strain of weed, only to fall into a 50-year slumber and wake up in the 2020s. While time (and weed culture) may have changed, the Freak Brothers are just as mellow as ever. "The Freak Brothers" is a Tubi Original. Rated TV-MA. One season, 8 episodes. Also featuring the voices of Tiffany Haddish, La La Anthony, Adam Devine, Blake Anderson.

How to watch "Welcome to Flatch"

"Welcome to Flatch" airs Thursdays at 9 p.m. EST on FOX. If you’d prefer to stream, you can find the show on FOXNow or watch via Hulu.