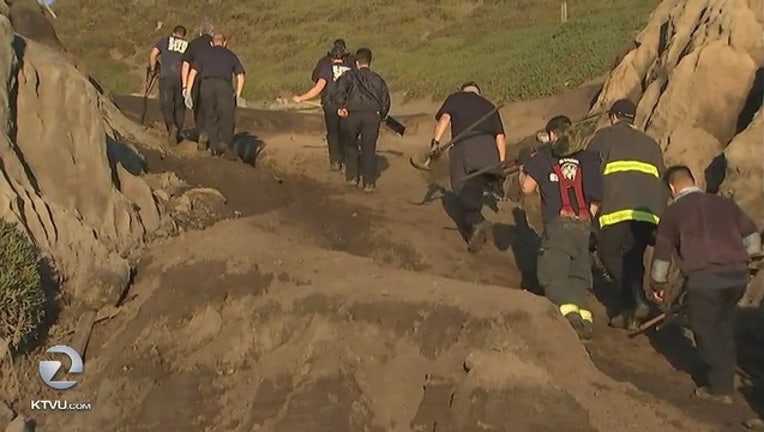 SAN FRANCISCO (BCN) - Recovery crews seeking a woman who was reportedly buried in a landslide that dumped an estimated 4 or 5 tons of dirt onto a beach at San Francisco's Fort Funston on Friday resumed their search through the weekend.

According to officials with the Golden Gate National Recreational Area, crews worked with soil specialists from partner agencies and the National Park Service.

But because of a combination of weather and tide conditions as well as instability along the sandy bluff, the crews were limited to visual searches for the missing woman.

On Monday, the crews returned and assessed the possible use of ground-penetrating radar, but the use of that equipment was ruled out because of the unstable conditions in the area.

The team will assess the conditions at the beach and sandy bluff after windy and wet weather passes later this week. It will use a long-boom excavator to work on the beach's surface.

"From third-hand reports, this appears to be an unfortunate and isolated natural incident. Ocean waves, soft sand and soil, and recent storms events contribute to erosion of beaches and coastal bluffs," said Charlie Strickfaden, communications director for the Golden Gate National Recreation Area, in a statement.

Witnesses saw two women climbing up the 80-foot cliff with a dog around 2:30 p.m., according to fire officials who initially responded to the incident. The women were about halfway up when the cliff started caving in on top of them.

Bystanders pulled out one woman and began frantically digging for the other but were unsuccessful.

The woman who was rescued did not have serious injuries, and the dog was uninjured, fire officials said.

Firefighters called out a search and rescue dog to help look for the buried woman, but by 6 p.m., they called off the search.

NPS officials are reminding visitors to be aware of their surroundings and the conditions of natural coastal landscapes.

With the exception of the beach and search area, the rest of Fort Funston remains open, according to NPS officials.