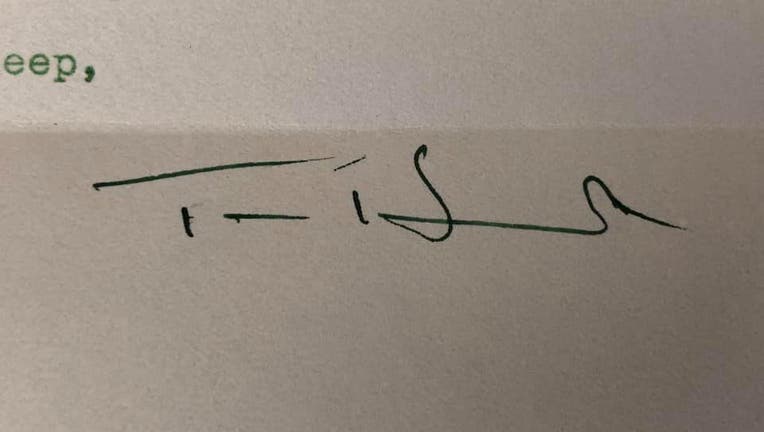 Thom Cholowski shared these photos of the special reply, which he said arrived in the mail on August 25. (Credit: Thom Cholowski via Storyful)

“What a class act,” Cholowski wrote, posting a copy of the letter he received from the acting legend, who wrote back in response to Cholowki reaching out to praise Hanks for his love and passion for the craft.

Hanks once wrote a love letter to the device, published in the New York Times on Aug. 3, 2013.

Cholowski told a local Canadian outlet that he sent a thank-you note to the movie star earlier this year, saying, "Tom Hanks has very much been the celebrity face of typewriters, something that he's always been passionate in."

Tom Hanks surprised an Australian boy after the boy reached out to express his concern about the actor's recent bout with coronavirus, but also mentioned how he was bullied because his name is Corona, a report said Thursday.

"Through Tom's advocacy, it's gone from being a nostalgic, old fashioned piece of technology to a point where people are taking a second look at these machines and they're really rediscovering the joy and beauty of these wonderful machines," Cholowski said.

Underneath the “Tom Hanks” letterhead, typed in green ink, the letter reads, “What a privilege it is to type a letter to western Canada’s premier typewriter repairman…”

Cholowski said that Hanks wrote in his letter, “I know the next time or the first time I’m in Saskatoon, Saskatchewan, I’ll be darkening your door if only to smell the lubricant of a well-refurbished machine, no matter what the language, braille or Native-Canadian Cree.”