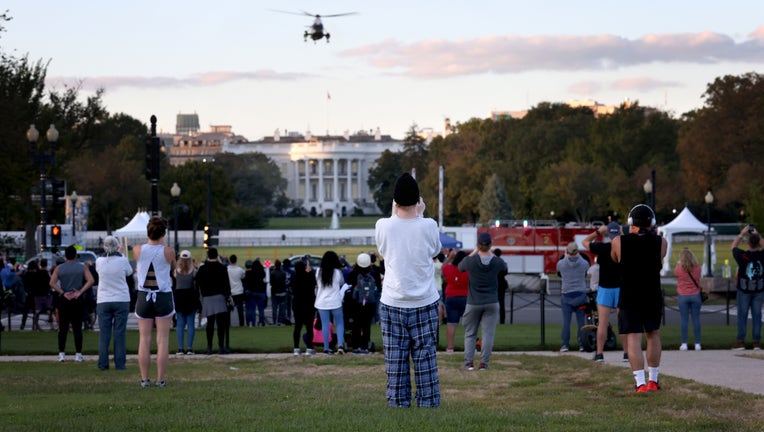 WASHINGTON - It's a month before Election Day and President Donald Trump is in the hospital, infected with a virus that has killed more than 209,000 Americans. What happens in the election — already well underway — should his condition take a turn for the worse?

If the president is unable to serve, through illness or death, the 25th Amendment makes clear the powers of the presidency transfer to Vice President Mike Pence until the president regains the ability to perform his duties.

It's never happened in a country with a long transition between Election Day at the start of November and the start of a president's new term on Jan. 20. The Constitution, as well as state and federal election laws, would help guide the country through the process. But with no precedent, the outcome is far from certain.

The House of Representatives has the final say on who wins the presidency. Before the House might have to take charge, there are roles for political parties, state legislatures, the Electoral College, the courts and, most importantly, voters.

Here are some questions and answers about what might happen if a presidential candidate dies, before or after the election:

CAN POLITICAL PARTIES REPLACE A CANDIDATE WHO DIES?

Yes, but not this close to Election Day. Nearly 63 million ballots have already been sent to voters, with nearly 3 million votes already cast. The deadline for candidates to withdraw has passed in all but two states — South Carolina and Connecticut — and their deadlines are a few days away.

“It would be impossible to change ballots at this time without delaying the election and starting the voting process over again," said Richard Hasen, a law professor at the University of California–Irvine School of Law. “I don't think Congress is going to do that."

In modern U.S. elections, the meeting of the Electoral College is essentially a ceremonial confirmation of the choice made by voters. This year, it will take place on Dec. 14. But if the winning candidate is no longer alive, it would be anything but routine.

"The question is, Who would the electors support?” said Richard Pildes, a constitutional law professor at New York University.

WHAT HAPPENS IF THE WINNING PRESIDENTIAL CANDIDATE DIES AFTER THE ELECTION?

However, the winning candidate doesn't become president-elect until a joint session of Congress counts the votes from the Electoral College and declares a winner, Pildes said.

By law, Congress is scheduled to formally receive the votes from the Electoral College on Jan. 6. The new Congress, which will be elected in November and sworn into office on Jan. 3, will preside.

WHAT HAPPENS IF THE WINNING CANDIDATE DIES BEFORE CONGRESS DECLARES A WINNER?

“That’s the worst, most confusing time,” said John Fortier, director of governmental studies at the Bipartisan Policy Center. “They are going to have to figure out what to do with (Electoral College) votes cast for a candidate who has died.”

If the winning candidate dies before the Electoral College meets, the electors could coalesce around a replacement candidate recommended by the party, perhaps the vice presidential candidate.

“For the most part, these people are picked because they are loyal party people," Fortier said. “You could have a few stray here or there, but they are not rebels.”

A party's electors would have an incentive to coalesce around one candidate, he said, because they wouldn't want to risk throwing the election to the other party. But there is no guarantee they would all agree on a replacement candidate.

Some states have laws that require electors to vote for the presidential candidate who won the statewide vote; other states could quickly pass laws governing the electors in the event that a candidate dies.

“The party can say what the party wants, but the states would decide what to do with those electors,” Hasen said.

The Supreme Court ruled unanimously in July that states may require electors to support the candidate picked by voters in the election. However, the court left open what would happen if the candidate dies.

“Nothing in this opinion should be taken to permit the states to bind electors to a deceased candidate," Justice Elena Kagan wrote in a footnote to her majority opinion.

If this happens, expect litigation.

WHAT IS THE ROLE OF CONGRESS?

The 12th Amendment to the Constitution gives Congress the final say on who is elected president and vice president. Congress decides whether to accept or reject slates of electors from the Electoral College and to determine whether a candidate has won the required 270 electoral votes to become president.

As a check on this power, both the House and Senate must agree to reject a slate of electors. If the two chambers don't agree, the electors get counted under federal law, said Michael Morley, an assistant law professor at Florida State University.

If no candidate reaches 270 electoral votes, the House chooses the president and the Senate chooses the vice president, in a process spelled out in the Constitution.

In the House, each state delegation gets one vote for president, and they must choose among the three candidates who received the most votes in the Electoral College. Currently, Republicans have a majority in 26 state delegations, but the numbers could change after the November elections and a new Congress takes office.

The Senate would choose the vice president by a simple majority vote.

Election experts said they wouldn't expect the courts to play a role at this point because the Constitution clearly grants Congress the authority to resolve a disputed election for president.

The Supreme Court did effectively decide the 2000 presidential election in favor of Republican George W. Bush by ending the recount in Florida. But the court's ruling came before the Electoral College votes were presented to Congress.

“It is really in Congress’ hands after the electors have voted,” Fortier said.

HAS CONGRESS EVER HAD TO DECIDE THE OUTCOME?

Congress has decided three presidential elections, but it's been almost 150 years, according to a history of the House published by the chamber.

In 1800, Thomas Jefferson and Aaron Burr tied in the Electoral College vote, with 73 electors apiece. After six days of debate and 36 ballots, the House chose Jefferson as the nation's third president.

In 1824, Andrew Jackson won a a plurality of the popular vote and the most Electoral College votes. But he failed to reach a majority in a four-candidate race, and the House chose one of his opponents, John Quincy Adams, to become the nation's sixth president. Jackson won the presidency four years later.

Congress also helped choose the president following the election in 1876 between Republican Rutherford B. Hayes and Democrat Samuel Tilden. Tilden won the popular vote and the electoral count. But Republicans challenged the results in three Southern states, which had submitted slates of electors for both candidates, according to the House history.

To resolve the dispute, Congress set up a bipartisan commission of House members, senators and Supreme Court justices. After cutting a deal to remove federal troops from the South, ending Reconstruction following the Civil War, the commission voted along party lines to award the presidency to Hayes.

Stephen Ohlemacher is the Election Decision Editor for The Associated Press.