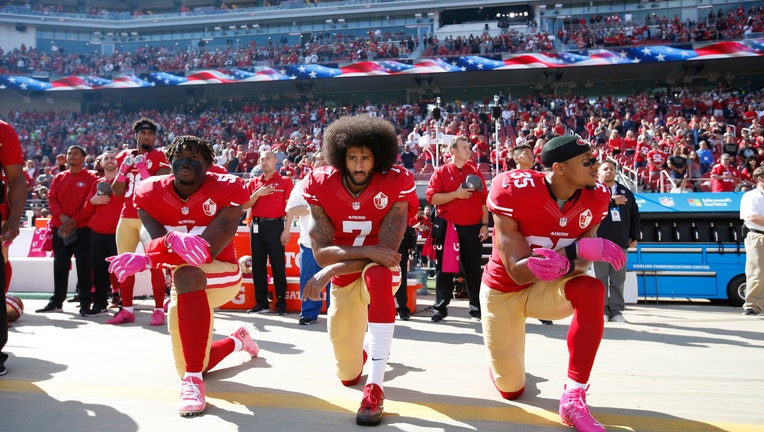 SANTA CLARA, CA - OCTOBER 23: Eli Harold #58, Colin Kaepernick #7 and Eric Reid #35 of the San Francisco 49ers kneel for the anthem prior to the game against the Tampa Bay Buccaneers at Levi Stadium on October 23, 2016 in Santa Clara, California. The

SAN FRANCISCO - When Major League Baseball returned for its abbreviated season due to the novel coronavirus, Black Lives Matter took center stage. Players and coaches alike took a knee during the national anthem as a symbolic gesture towards the reinvigorated social justice movement. Likewise, NBA players let their jerseys do the talking to show that they too were on board with the movement.

Their messages included; “Say Their Names”, “I Can’t Breathe”, and “How Many More?” referring to those lost at the hands of police brutality.

The NFL season is scheduled to get underway September 10. If it manages to do so, the league will allegedly incorporate “Lift Every Voice and Sing,” the song known as the Black National Anthem -- during Week 1 of play.

That may seem like a small gesture towards social justice and equity compared to say, something like the retiring of the Washington Redskins’ racist name and logo, which was finally announced by the team in July after decades of pressure. A new name remains to be determined, but dumping the offensive name and mascot was something Native Americans had called on for years.

As George Floyd protests exploded across the country this spring and summer, the NFL also announced players could wear social justice decals on their helmets and gave its employees Juneteenth off.

Was the NFL suddenly ‘woke'?

“I used to be an NFL fan, but I stopped watching after [Colin] Kaepernick was blacklisted," said Dr. Shana Redmond, UCLA professor of musicology, and an expert on the intersections of music, race and politics.

She’s referring to how Kaepernick, the former 49ers quarterback, was years ahead of the curve. Many agree Kaepernick was blackballed by the league, after he sat out during the national anthem in 2016 to highlight the very injustice and inequalities we are reexamining today.

The ‘Take a Knee’ campaign took off, but wasn’t well received in some circles, including the likes of President Trump.

NFL Commissioner Roger Goodell recently apologized for not listening to NFL players who had previously spoken out against racial injustice in the country. “We are listening, I am listening,” Goodell said. Although he did not directly address Kaepernick.

Using "Lift Every Voice and Sing" will hardly convince critics that the league has gone through a metamorphosis.

“It’s a slap in the face. One week. You give it one week of a hearing. It’s sad. It’s trite. It's the absolute least they could do,” Redmond said.

The spiritual song itself has an interesting history dating back to the turn of the 20th century. It was originally written as a poem by James Weldon Johnson and then set to music by his brother. The NAACP eventually adopted it as their official song by 1920. Its lyrics are profound when examining the parallels of the current BLM movement with previous civil rights' struggles.

"Sing a song full of the faith that the dark past has taught us."

“Sing a song full of the hope that the present has brought us.”

These lines, part of the song’s minor key setting in, are particularly resonant. Redmond explains how the song’s modality changes here and is meant as a stand alone departure from the composition. When you listen to the song, your ear will pick up on this, Redmond said.

“They are not far from abolition. Their parents were very proximate to it,” Redmond said about the song during the time it was composed. “It’s a new generation, a new century and this is for them to imagine what freedom would look like. At the moment freedom was not free. They did not know freedom in any material way. They still had Jim Crow laws.”

Despite this song’s moments of aspiration, Redmond sees the NFL’s gesture as a shallow PR stunt and one that’s destined to fail. “Who in the audience will know this song? Will they revere it? Will they stand, will they print the lyrics? Will they be on the jumbotron?”

With the Raiders gone to Las Vegas a group of Bay Area entrepreneurs and business people want to bring professional football back to Oakland.

As far as allowing fans in stadiums goes, the NFL is leaving that up to local government jurisdictions. It may end up being just the players, coaches and a few other employees reacting to the anthems as they play back to back. But Redmond warns it’s a dangerous juxtaposition.

Davey D. Cook, vice president of Bay Area Black Journalists Association and San Francisco State University Professor of Africana studies said for the NFL to pivot and sing this song is weird and to only do it for one week shows their disconnect.

“If you’re a real football fan you’re not really standing during the [national] anthem. It’s a beer run. Maybe during 9/11? But ain’t no football fan really tripping off on that,” said Cook.

But he does acknowledge that there is a recognition of power going on within the league, especially in the case of renaming the Redskins.

“People have been protesting that for decades.” He said Washington team owner Daniel Snyder would host events like ‘Native American Night’ where he’d spend money on individuals to justify the team’s former name and to discredit the protests. The Navajo Code Talkers, a group of Native World War II veterans, had participated in Native American Night in the past.

“It’s akin to commercial radio having artists come on to say, ‘I don’t have a problem using the N-word. Drake says the N-word.' But no matter how many times, you can’t toss that around and think that’s okay. I would not walk up to a Native American and call them a ‘redskin.' It would be found as a racial epithet. [It’s not like] one individual can be the representation of an entire community," Cook said.

In this case, the recognition of power largely came from corporate sponsors. “FedEx was the one to step to the Redskins and made them bow down,” said Cook. “I’m not convinced that Snyder woke up one day and felt moved or had a life-altering experience. He probably thought, ‘I don’t want to lose any money.’”

The shipping company said it would remove signage from the team’s stadium unless they changed their name. That would have cost Snyder big and almost ended their naming rights deal. FedEx was concerned over harm to their brand and pushed for something more inclusive.

Cook leans in on calls for systemic change rather than symbolic change. Kaepernick’s situation comes up again.

“The killing of Black and brown folks is the reason for this conversation and so is the immunity of police departments. He only became an issue when he sat during the anthem to protest police brutality. The issue here is, will you give Kaepernick his job back?”

Goodell recently encouraged teams to sign Kaepernick and had even set up a tryout for him in 2019; a spectacle that was largely criticized as being insincere.

Cook characterizes what happened with Kaepernick as racist: “Rich Black people need to be put back in their place. He was disparaged. [Kneeling] became a line in the sand and he lost his job for it.”

He’d like to see diversity in NFL management, but is wary of “Black faces in high places,” adding this is something police departments do with police chiefs, but that it doesn’t work.

Cook said the NFL could go farther by highlighting calls to vote, push back on voter suppression and more directly denounce police brutality. “To have a player speak on this, that would be thunderous. ‘Call this hotline to register or take action on suppression.’”

To him, equity involves hiring Black film crews, commercial directors and investments that involve people from the community.

Kevin Lynch, a veteran sports reporter and professor at San Jose State University, has been covering the 49ers for some 30 years. He sees financial literacy for the players as one way to attack systemic racism.

“African Americans make up 70% of the players. How do you get someone to be an owner and a head coach? There really needs to be much more financial planning to get players to hang on to their money,” Lynch said.

In his career, he’s seen many players fall from grace into financial distress, often because of low financial literacy and high-risk investments like restaurants or shoe brands.

“Owners know how to make and keep money. They should be helping these players structure contracts on how to defer money and invest in money,” said Lynch. “They should invest in NASDAQ, S&P, scholarship funds, which leads to generational wealth. Wealth is important.”

Like the refrain of a song, Redmond agrees there are more substantive things that can be done rather than use the "empty symbol" of a song to step in for the Black community.

“Pay all of your stadium workers a standard $15 wage. Allow them to unionize. Initiate community benefits agreements," she said. "All of these things would actually materially benefit people and show respect rather than sing a song for a week.”