OAKLAND - While videos of thieves ransacking stores like Neiman Marcus in San Francisco have recently gone viral, it’s everyday items like laundry detergent that have become the plunder of choice for most criminal syndicates in the Bay Area.

"They know they can turn it around quickly," said Lt. Scott Ryan, with the San Francisco Police Department’s burglary unit. "Those CVSs, those Walgreens have large displays of toiletries, cosmetics and items like that they’re going after."

KTVU recently visited a flea market in Oakland where law enforcement officials said many shoplifted items are resold. Table after table were filled with toothpaste, deodorant, detergent, razors and other packaged everyday items. 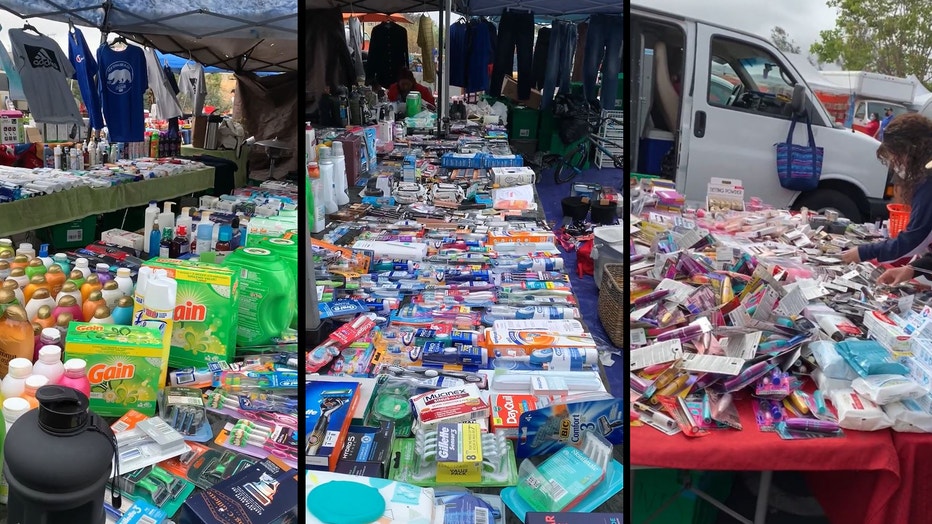 We purchased toothpaste, bodywash, detergent and a razor for $17. All four items would have cost more than $40 in the store. None of the sellers was accused of peddling stolen items, but a Gillette razor had a sticker saying it was intended for sale at a Safeway in Orinda. An employee at the store told KTVU the razor was likely shoplifted.

Resale markets like the one at the Oakland flea market offer a window into the complexity of the Bay Area’s retail theft rackets. Once thieves swipe the merchandise, it usually exchanges hands several times and is then fenced on the street or online.

"They know there’s a demand for those items and they know the fences will commonly buy them from them regularly," Ryan said.

According to the California Retailers Association, organized retail crime makes of about 85% of losses and most are everyday items. Laundry detergent makes up 21% of all boosted merchandise. Razors make up 20%. Other popular targets: deodorant (15%), allergy medicine (13%) and infant formula (13%).

Walgreens has recently shuttered 17 stores in San Francisco, blaming shoplifters for inventory loss. In July, Target announced it was limiting hours in the city due to retail theft.

"This is a multi-million dollar industry," said San Francisco Supervisor Ahsha Safai, who has called on the city to do more to address the problem. "We need a coordinated strategy. If it means inviting in the US Attorney and the FBI, let’s do that."

The San Francisco Police Department already works with law enforcement around the state to combat this type of organized theft. They’ve recovered more than $10 million in stolen items in the past year and a half.

"The reality is our retail thefts are down this year but that doesn’t matter, we need to take care of business," Chief Bill Scott told KTVU.

Mayor London Breed said she’s disappointed that the city is being cast in a negative light with viral videos of thefts being broadcast on national news programs.

"At the end of the day, we see these things happening. it’s unfortunate. they’re going viral and what have you, but we will continue to go after the people who are perpetrating these crimes in our city," she said.