OAKLAND, Calif. (KTVU) - The mixture of high temperatures in the Bay Area and smoke from the Kincade Fire are expected to produce poor air quality across the region.

The Bay Area Air Quality Management District (BAAQMD) extended its Spare the Air alert into Friday as wildfire smoke continued to pour into the Bay Area.

The National Weather Service forecasts the smoke to become more widespread by Friday afternoons and winds ramp up.

Broadbent said, “It is important that residents protect their health and avoid smoke exposure by staying indoors if heat is not an issue. If temperatures are too hot indoors, visit an air-cooling center or other facilities, such as a library or other public building that has filtered air.”

Air quality for portions of the Bay Area

Forecast AQI for Oct. 25, 110 which means Unhealthy for Sensitive Groups

Forecast AQI for Oct. 25, 105 which means Unhealthy for Sensitive Groups

Forecast AQI for Oct. 25, 105 which means Unhealthy for Sensitive Groups

Forecast AQI for Oct. 25, 102 which means Unhealthy for Sensitive Groups

Forecast AQI for Oct. 25, 102 which means Unhealthy for Sensitive Groups

The Air Quality Index (AQI) represents the concentration levels of air pollution. It assigns numbers on a scale between 0 and 500 and is used to help determine when air quality is expected to be unhealthy, according to the BAAQMD.

The U.S. Environmental Protection Agency(EPA) has assigned a specific color to each AQI category to make it easier for people to understand quickly whether air pollution is reaching unhealthy levels in their communities. For example, the color orange means that conditions are "unhealthy for sensitive groups," while red means that conditions may be "unhealthy for everyone," and so on. 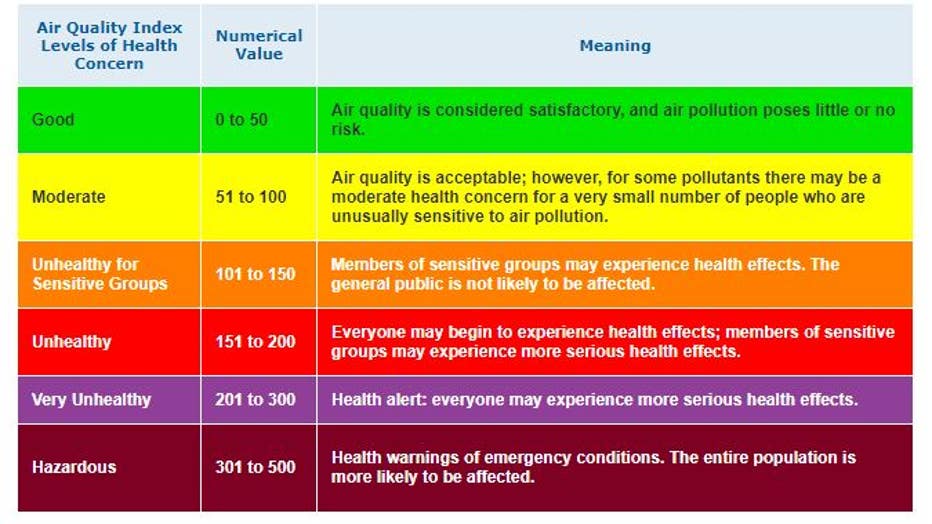 The numbers used for the AQI scale are divided into six color-coded ranges: Green, Yellow, Orange, Red, Purple, and Burgandy.

Readings below 100 on the AQI should not affect the health of the general public, though readings in the moderate range of 50 to 100 may affect unusually sensitive people. Levels above 300 rarely occur in the United States.