Cox did not elaborate on how or when the two firefighters were burned, but said the one with serious injuries was airlifted to UC Davis Medical Center for treatment. 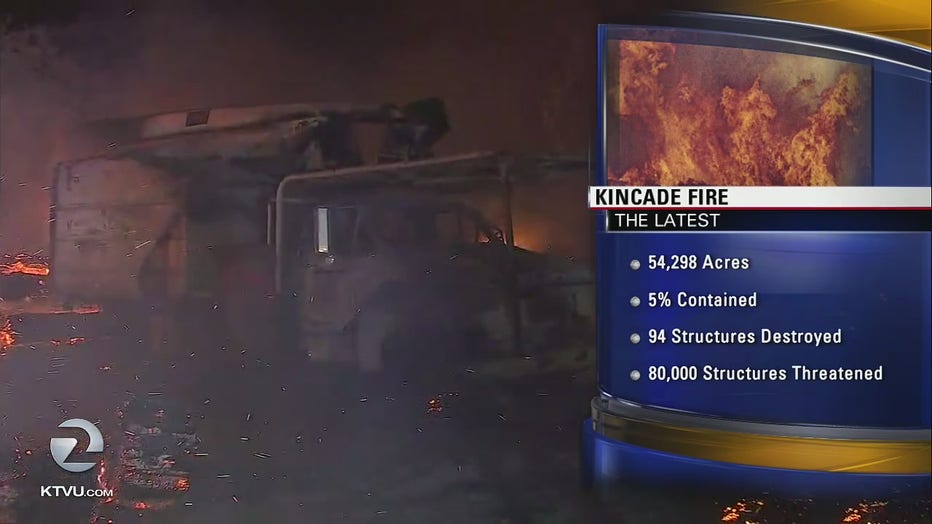 In additon to the 94 structures destroyed by the Sonoma County fire, the blaze has damaged another 17 structures since it broke out last Wednesday. The fire is now 5% contained.

"Urban interface-type fires. where the residences are built right up against our open spaces or our wild land, obviously that compounds our ability to defend those structures," said Cal Fire spokesman Don Camp.

Hurricane-force winds have stoked the fire and forced tens of thousands of people from their homes. People from communities as far away as the Pacific Coast have evacuated, many fleeing to safer ground in the Bay Area.

In Windsor, wind-whipped flames from the Kincade Fire traveled through Foothill Regional Park and into town, but fire crews were able to get an upperhand on the fire and save lives and property.

"The most amazing part of it is that out of probably close to a hundred houses that have fire around it, they've not lost a single one," said Windsor Mayor Dominic Foppoli.

One of the most important tools in the fire fight are the aircraft that drop retardant and water on the fires.

However, heavy flames and thick smoke have grounded many helicopters and other aircraft.