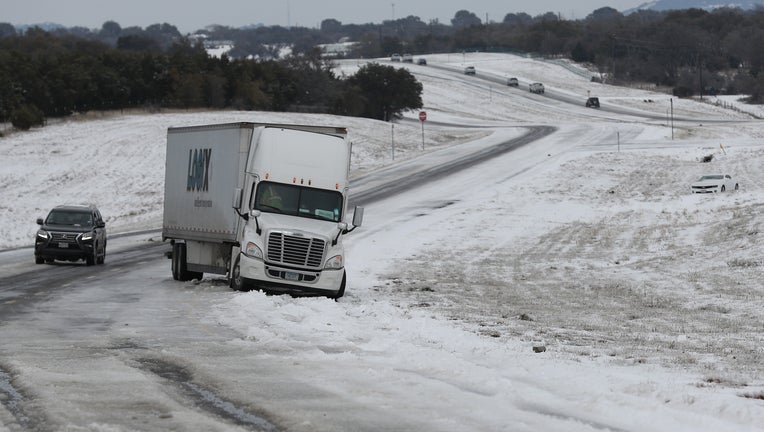 KILLEEN, TEXAS - FEBRUARY 18: A tractor trailer is stuck in the slick ice and snow on State Highway 195 on February 18, 2021 in Killeen, Texas. Winter storm Uri has brought historic cold weather and power outages to Texas as storms have swept across

SAN FRANCISCO (KTVU) - Powerful storms across the country have delayed some COVID vaccine shipments headed to the Bay Area.

The San Francisco COVID Command Center confirmed that vaccine deliveries are running behind due to winter storms hammering parts of the U.S.

The command center said in a statement that it received a shipment on Wednesday, but is "waiting to hear from the state about our next deliveries and whether they will be impacted by further delays."

City officials did not say which vaccination sites the delayed shipments are intended for and if the disruption will impact vaccine appointments.

On the Peninsula, San Mateo County Health said they were expecting 14,200 Moderna doses, a combination of first and second doses, but was notified by California Department of Public Health that the weekly delivery of vaccine doses was delayed by the inclement weather. They have not received information on when the shipment will arrive.

Despite the delays, two San Mateo County vaccine clinics are available to the public. Thursday's at the Event Center, 1346 Saratoga Drive, was open until 4:15 p.m. And another at San Francisco International Airport, located at the long term parking garage at 806 S. Airport Blvd., continues Friday from 12:15 p.m. to 4 p.m.

County Health warned the vaccine will likely switch from Moderna to Pfizer on Friday and that some second-dose appointments on Friday may need to be canceled due to the switch in vaccine brand.

The health department also gave an update late Thursday afternoon to say the SFO appointments for Friday have been booked and that no spots on a standby or wait list are being accepted. Future clinics depend on vaccine supply.

County officials estimated that 12,500 people could be vaccinated through the SFO clinic by the end of the week.

As of Wednesday, 116,259 people have been vaccinated in San Mateo County, which represents 18.1 percent of individuals 16 years and older in the county.

A similar story is playing out in the South Bay, where a number of Moderna doses headed for Santa Clara County have been delayed because of the weather conditions in the Midwest, a health department spokesperson said.

Existing vaccine appointments were fulfilled with the supply on hand.

"The delays have not had a significant effect on vaccination distribution thus far. Continued delays could result in cancelled appointments," a spokesperson from Santa Clara County's health department said.

Santa Clara County has opened two drop-in sites in San Jose that do not require appointments.

The second site is the Mexican Heritage Plaza at 1700 Alum Rock Ave., which is open Tuesday through Thursday. Sign-ups start at 9 a.m. also on a first-come, first-served basis and vaccinations are given from 10:30 a.m. - 4:30 p.m.

For more information on vaccines or to make an appointment, visit sccfreevax.org or call 211.