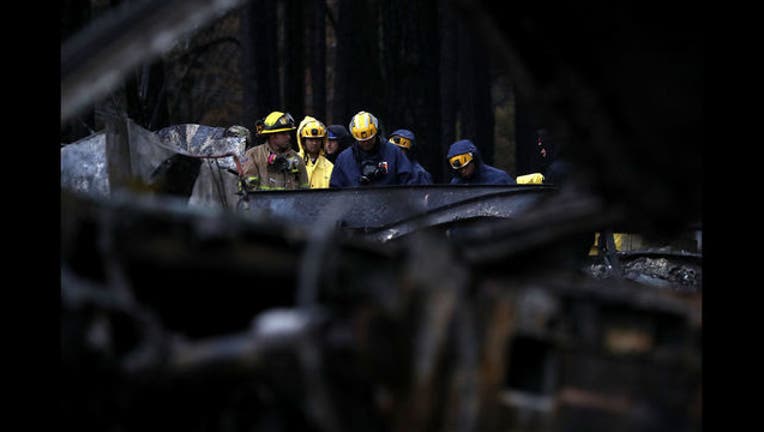 FILE ART Search and rescue crews search a property that was destroyed by the Camp Fire for human remains on November 22, 2018 in Paradise, California. (Photo by Justin Sullivan/Getty Images)

PARADISE, Calif. (AP) - The search for people unaccounted for after the deadliest U.S. wildfire in at least a century is winding down in Northern California, with just 11 names left on a fluctuating list that once approached 1,300 and prompted fears that hundreds had died in the flames.

The declining number released late Monday came as a relief in the Paradise area as it reels from the wildfire that killed at least 85 people and destroyed nearly 14,000 homes.

Families, friends and even long-ago acquaintances have been peppering social media with pleas for help finding people. Sometimes they had no more than a first name to work with.

Authorities now say they have located more than 3,100 people who had been reported as unreachable at some point during the catastrophe.

He also has revised the death toll down to 85 from 88, saying medical examiners determined several bags of human remains were duplicates.

The Associated Press has been scouring the list of people unaccounted for and found duplicate names, misspellings and people who don't appear to exist.

People who were previously identified as dead or alive by family or friends have at times reappeared on the list.

The list of names released each day frustrated those looking for people and baffled residents whose names appeared even though they weren't missing.

Honea repeatedly said he released the list - no matter how long at times - to reach those who may not know people were looking for them.

He said it was never intended to be a definitive account of people who were missing or possibly dead.

The AP located several people, including a couple who had decamped from the fire zone area for a previously planned vacation in Hawaii.

Patrick Holden and Nancy Barnes fled their Paradise home at the same time as most of their neighbors. They spent five terrifying hours on Nov. 8 making the normally 30-minute drive to nearby Chico.

The next day, they identified themselves as safe through Facebook, alerted their friends and then, realizing that their home was burned to the ground, headed to Hawaii for their vacation.

Holden was stunned to see his name pop up on the list two weeks after the disaster. The couple appeared on a list released Sunday as "Patrick and Nancy Holton" of Paradise.

"Everybody in the car club, the bridge club and the Paradise Newcomers Club knew we were OK," Holden said Monday from his timeshare in Maui. "I don't know how we got on the list now."

His daughter Amanda Lunsford said a former co-worker of her father might have added him. Holden said he hasn't called the Butte County Sheriff's Office to let them know about the error, because they're busy.

"I think they have enough calls coming in," he said. "I have a lot of respect for the sheriff's office."

The uncertainty continues for Lita Siebenthal, whose sister remains on the list. She said she's spoken to nine different detectives and been asked to repeat information she's already told other investigators.

She said a relative has provided a DNA sample to compare to human remains but is still holding onto hope that Sara Martinez-Fabila will be found alive.

"It's an organized chaos up there," Siebenthal said. "I would think by now we would be a little further along."

Phil John, chairman of the region's wildfire preparedness organization who helped draft the evacuation plan for Paradise, said the lower-than-expected death toll is a "miracle."

In a push for order, the organization had called for staggered exits and a warning system that required residents to sign up for alerts.

Still, there were traffic jams when the fire swept through town, but John believes the death toll would have been much higher without the plan.

Councilman Mike Zuccolillo said he was surprised that the death toll was not higher.

He said most residents received no official notification and got away safely because of warnings from neighbors and family. Now, the city has a long way to go to recover and faces significant financial hurdles in rebuilding, he said.