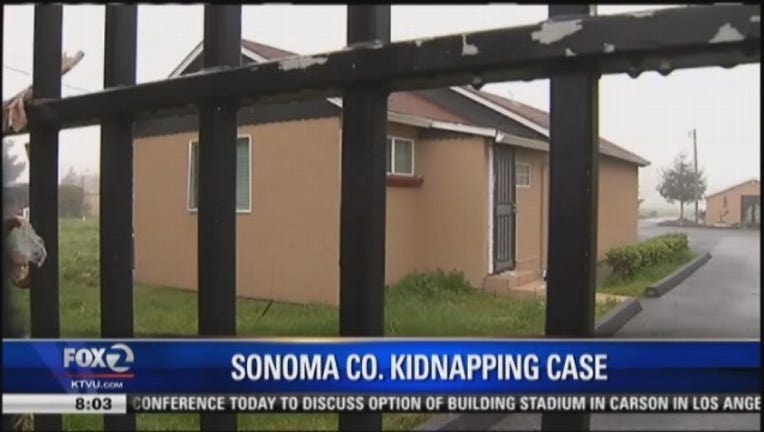 A 22-year-old woman says she was kidnapped and held for three weeks while she was beaten and sexually assaulted. The ordeal ended when she was able to escape.

The sprawling piece of property where she was allegedly held sits just outside the Santa Rosa city limits. And to neighbors, the property is now infamous. "It's a little disturbing," said Chris Barton.

On Thursday, a SWAT team raided the property searching for evidence of a horrific crime. "There was just a lot of police activity going on here," added Barton.

The woman said she was kidnapped at gunpoint in the Roseland area of Santa Rosa three weeks ago. She escaped on Wednesday.

"She apparently saw an avenue of escape. Which was a door or a window or some way to get herself from where she was held," says Sonoma County Sheriff's Sgt. Cecile Focha.

She told police that she was held captive in the huge gated compound, beaten and sexually assaulted.

"From our indications right now, everything that the victim has said that we follow up on all investigations. And when someone comes along alleging sexual assault especially as traumatic and tragic as this, of course we look into it," explained Focha in a rather vague manner.

KTVU talked off-camera with a couple who appeared to live in a trailer on the property.

The man declined to comment, but when asked about the alleged kidnapping and sexual assault, the woman said "you better ask her..." referring to the alleged victim.

Investigators say she - the alleged victim - had injuries consistent with being beaten and sexually abused. "Like anyone who's been through a traumatic assault like this, she's going to take some time to heal," says Focha.

Neighbors are appalled by the case. "It's surprising. We had no idea that just a couple doors down something like this could be happening. So, hopefully it's not true," says Chris Barton.

Despite the raid, no one has been arrested, although investigators say that could change.