The FIFA World Cup is the biggest men's soccer tournament in the world. Here's a look at the eight countries that have won the World Cup since the tournament was first held in 1930.

Italy is facing another detour to get to a World Cup final.

The playoffs beckon for the Azzurri — just like four years ago — after stumbling to 0-0 at Northern Ireland on Monday, plunging the recently crowned European champion to a second-place finish behind Switzerland in their qualifying group.

Switzerland leapfrogged Italy with a 4-0 win over Bulgaria.

Italy's soccer-mad fans might be starting to fear the worst. After all, their country also failed to secure automatic qualification for the 2018 World Cup and wound up losing to Sweden in a two-leg playoff, one of the darkest moments in Italy's soccer history.

This time, the Italians will need to get through two one-leg matchups to advance in a newly devised playoff system. The draw takes place on Nov. 26 and Italy will be at home for its first match because it will be a seeded team.

On the next-to-last night of group play in Europe, England romped to its biggest competitive win — 10-0 over the part-timers of San Marino — to finish top of its group with more goals (39) than any other team in qualifying.

Harry Kane enjoyed himself, in particular, with four goals — all in the first half — to move to 48 for England, five off Wayne Rooney's national record.

Scotland will be seeded, like Italy, in the playoffs after a 2-0 victory over Group F winner Denmark, whose perfect record in qualifying came to an end.

Poland finished second in England’s group and closed with a 2-1 loss at home to Hungary, and will likely be away in its first match in the playoffs.

Italy and Switzerland went into their final qualifiers on 15 points each in Group C but with the Azzurri having a superior goal difference, the first tiebreaker if they ended tied on points.

That didn't come into play because while Switzerland swept to an easy win over already-eliminated Bulgaria thanks to goals by Noah Okafor, Ruben Vargas, Cedric Itten and Remo Freuler, Italy became the latest big team to struggle in an intense atmosphere at Windsor Park. 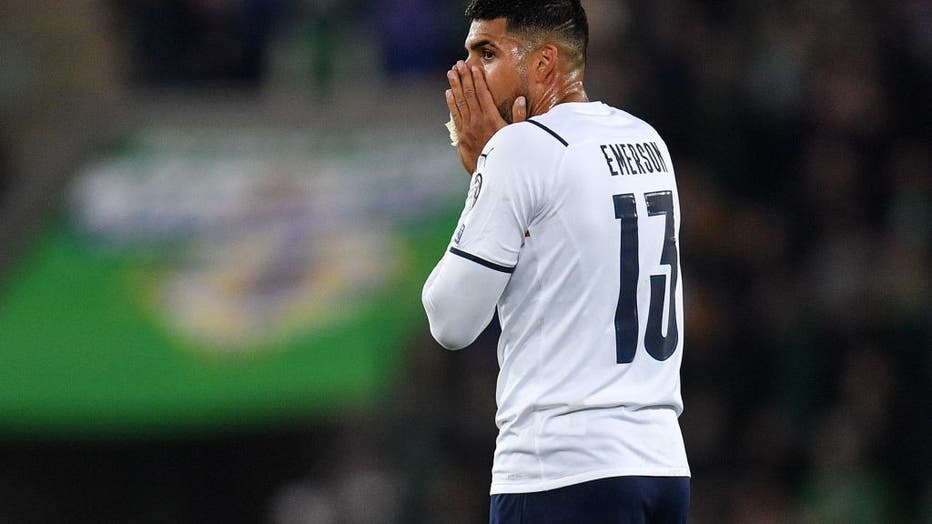 Antrim, United Kingdom - Nov. 15, 2021; Emerson of Italy during the FIFA World Cup 2022 Qualifier match between Northern Ireland and Italy at the National Football Stadium at Windsor Park in Belfast. (Photo By Ramsey Cardy/Sportsfile via Getty Images

Without injured striker Ciro Immobile and other regular starters, the Italians struggled to carve out opportunities despite dominating possession.

As Switzerland piled up the goals in Lucerne, Italy's task became even harder and Roberto Mancini's team nearly lost when Conor Washington's late effort was cleared off the line.

Mancini has sparked a revival for the Azzurri, culminating in winning Euro 2020 in July, but they could miss out again on soccer’s premier tournament for the second straight time.

"We need to rediscover what has set us apart until now," Mancini said, "and remain completely calm until March."

Not since 1964 and a 10-0 win over the United States have the English reached double figures in goals in a match. They'd never done so in a competitive match before Monday.

Harry Maguire, Emile Smith Rowe, Tyrone Mings, Tammy Abraham and Bukayo Saka joined Kane in scoring for England, while there was also an own-goal by San Marino, the world’s lowest-ranked team — a lineup filled with non-professionals who were using annual leave from their day jobs to play in the qualifier.

Getting near England's record win, 13-0 over Ireland in 1882, looked on when Saka made it 10-0 in the 79th, by which time the beleaguered hosts were down to 10 men. But there were no more goals.

Scotland is one of four teams sure of being seeded — and therefore playing at home — in the playoff semifinals, along with Portugal, Italy and Russia.

Sweden also looks good for a home match, while Wales will get one, too, with a win over already-qualified Belgium on Tuesday when the group stage of European qualifying is wrapped up.