Mickey Nelson of Clarks Grove, Minnesota turns 100 in June and selected the Salvation Army to receive donations as part of his effort.

CLARKS GROVE, Minn. - As he nears his 100th birthday, a World War II veteran is planning to walk 100 miles in an effort to raise money for those impacted financially by the COVID-19 pandemic.

Mickey Nelson, who turns 100 in June, is calling the initiative “Walking to 100” and selected the Salvation Army to receive donations as part of his effort, according to a statement by the organization. He was inspired by a British army veteran whose 100 laps in his garden helped raise millions of pounds for the U.K.‘s National Health Service.

“I know that people are struggling, either from the illness or a job loss from all the businesses shutting down,” said Nelson, who lives in Clarks Grove, Minnesota. “I just thought there was something I could do to help.”

Thousands of cards flooded in for Capt. Tom Moore, who celebrated his 100th birthday on April 30 and raised some 30 million pounds for England’s health system.

The 99-year-old has lived in Clarks Grove his entire life, a small city located about 90 miles south of Minneapolis. He still lives in the same house in which he was born in 1920, according to the Salvation Army.

Nelson maintained tanks in an armored division during World War II. He also owned a successful bus business for 58 years, as well as a sand and gravel company.

“He’s a fixture in Clarks Grove, often seen walking down Main Street, past the hardware store and the post office, and The Salvation Army clothing donation box. Just about everybody in town knows Mickey and waves hello while he’s out walking,” the statement reads. 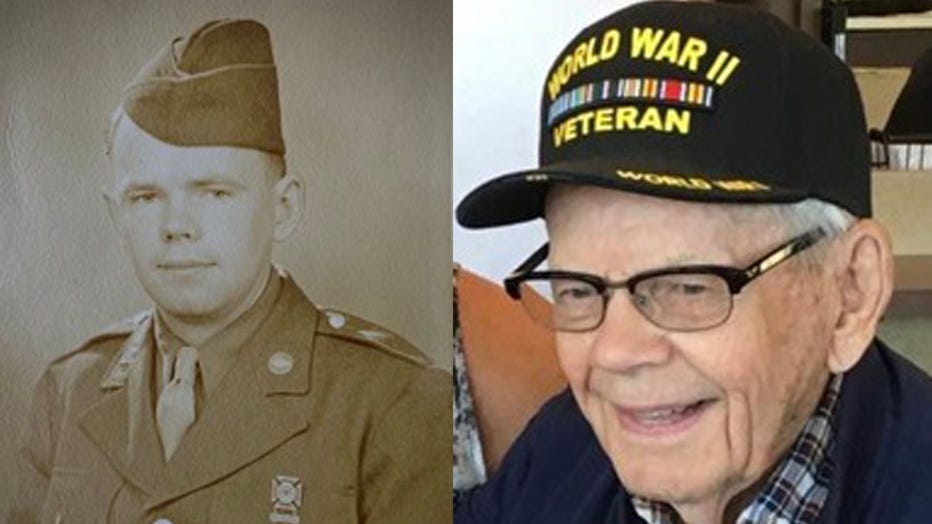 Mickey Nelson, 99, is pictured in a provided image (L) from his time in the service maintaining tanks in the armored division during World War II. Nelson turns 100 in June and plans to walk 100 miles this summer to raise money for COVID-19 relief in

Nelson said he began seeing the crisis negatively impact his neighbors, including many whose jobs have been furloughed or eliminated with no savings to fall back on.

Since mid-March, nearly 700,000 Minnesotans have filed for unemployment, which is 22% of the state's labor force. The state's unemployment rate soared to 8.1% in April, the highest since 1983 as Minnesota and other states shuttered thousands of businesses to fight the coronavirus pandemic.

As many as 40% of the recently unemployed have never before visited a food shelf, but now find themselves relying on them to help feed their families, according to the Salvation Army.

Nelson selected The Salvation Army Northern Division, which supplies food and emergency assistance to all of Minnesota and North Dakota, to use the money he raises to provide relief from the pandemic.

Salvation Army service centers have been on the front lines of food distribution since the crisis began. The international organization said distributions of groceries have increased as much as 900% in some locations.

“We have been working very hard to help those in need since mid-March. Our staff is working overtime and our resources are being stretched like never before,” said Lt. Colonel Lonneal Richardson, commander of The Salvation Army Northern Division. “But this effort being made by Mickey is truly selfless, and we are grateful for and inspired by his efforts.”

Those who wish to support Mickey on his walks this summer can do so at SalvationArmyNorth.org/mickey.

RELATED: A commemoration of American heroes: The origin of Memorial Day