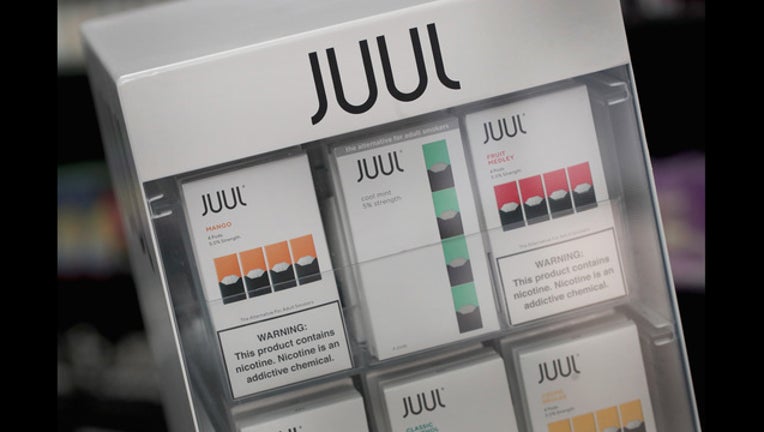 File art -- A new study has found that teens and young adults who use Juul brand e-cigarettes are failing to recognize the product's addictive potential. (Photo by Scott Olson/Getty Images)

STANFORD, Calif. (KTVU) - A new study has found that teens and young adults who use Juul brand e-cigarettes are failing to recognize the product's addictive potential, according to researchers at the Stanford University School of Medicine.

Researchers surveyed 445 high school seniors and recent graduates. In addition to a disconnect between teen’s usage and actual addiction, the study found that young Juul users were far more likely to have vaped in the past month than those using other e-cigarettes. Survey results show 59 percent of Juul users had vaped in the past month, compared to 30 percent of those using other e-cigarettes.

“I was surprised and concerned that so many youths were using Juul more frequently than other products,” said the study’s senior author, Bonnie Halpern-Felsher, PhD, professor of pediatrics, per Stanford. “We need to help them understand the risks of addiction. This is not a combustible cigarette, but it still contains an enormous amount of nicotine — at least as much as a pack of cigarettes.”

In one cartridge, the popular brand delivers the same dose of addictive nicotine as a pack of cigarettes. However, as the Stanford study notes, little scientific research has been done on the impact of Juul use on teenagers and young adults.

"Underage use of Juul is completely unacceptable."

The U.S. Food and Drug Administration recently launched a campaign aimed at warning youths of the dangers of e-cigarettes and stopping Juul sales to teens and young adults.