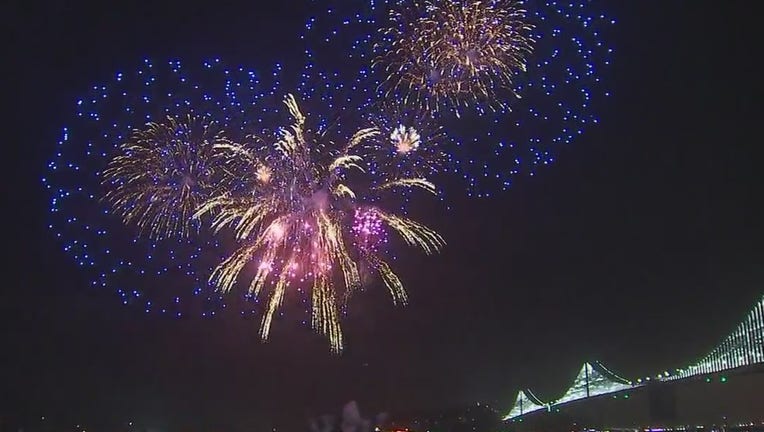 OAKLAND, Calif. (KTVU) - Fireworks, festivities, food — get ready to celebrate this year's Fourth of July. If you're looking for the best red, white and blue events in the Bay Area (and beyond), follow along with KTVU's city-by-city festivities guide to Independence Day.

Gathering more than 60,000 spectators annually, Alameda’s Fourth of July Parade is one of the biggest in the country. Celebrate by watching the marching bands, dance troops, floats, equestrians and more travel the 3.3 mile route, with the parade starting at 10 a.m. Learn more here.

Picnic while listening to live music in Memorial Park from 11 a.m. to 2 p.m. Learn more here.

Antioch's Fourth of July festivities are extra special this year, as the city celebrates its 150th anniversary. Start your day with a pancake breakfast served 8 a.m. to 10 a.m., followed by the sesquicentennial parade from 11 a.m. to 12:30 p.m. Various forms of entertainment will take place from 1 p.m. to 9 p.m., then fireworks will show over the Delta at 9:30 p.m. Learn more here.

Head to downtown Benicia's City Park for an all-day Fourth of July festival full of entertainment, artisan vendors and activities. Fireworks over the waterfront will follow the festival. Learn more here.

Cal Fire is working with law enforcement around the state to crack down on illegal fireworks, focusing on fireworks sold online.

Visit Todos Santos Plaza for the Fourth of July Parade kicking off at 10 a.m., and later at 9 p.m., watch the fireworks at Mt. Diablo High School. Learn more here.

Head over to Leo Ryan Park from 9 a.m. to 9:45 p.m. for food, entertainment, games, a family and dog parade and, of course, fireworks. Learn more here.

Gilroy Gardens will be celebrating from July 1 to July 4 at its family theme park, with food, drinks, a DJ and games. Learn more here.

Kings Beach's annual fireworks display will take place on July 3 at 9:30 p.m., along with a beach party at the nearby North Tahoe Event Center at 2 p.m.

Fireworks will light up the coast of Incline Beach, and festivities will take place July 4 to July 6 with bands, a carnival, a BBQ, dog dress-up contests, beer tasting and more.

In Truckee on July 4, a parade will begin at 10 a.m. along Donner Pass Road, and fireworks will take place at West End Beach at Donner Lake around dusk. Tickets are $6 and require proof of residency.

Lights on the Lake fireworks in South Lake Tahoe will begin at 9:45 p.m. on July 4, and Nevada Beach, El Dorado Beach and Timber Cove Marina all offer fantastic views.

Learn more here about these events.

The Fourth of July just so happens to be the last day of the five-day Marin County Fair, themed "So Happy Together!" this year. Along with headline entertainment, jugglers, unicyclists, interactive art experiences and more, there will be fireworks over the Civic Center's Lagoon Park. Learn more here.

On the outfield grass of Oakland Coliseum, enjoy the Oakland A's fireworks and drone shows after the A's game against Toronto Blue Jays. Learn more here.

Bring a blanket or chair to Mitchell Park, where there'll be food trucks, live music and games from 11 a.m. to 3 p.m. Learn more here.

Visit Fisherman's Wharf for fun activities, shopping or grabbing a bite to eat before the fireworks at 9:30 p.m. Learn more here.

Celebrating diversity on Independence Day in a thoughtful effort to reframe patriotism, the Rose, White & Blue Parade will begin at 9:45 a.m. in The Alameda and end around 3 p.m. Learn more here.

Head to California's Great America for an All You Can Eat Backyard Cookout, waterpark and a fireworks display above the Flight Deck rollercoaster. The amusement park, which was established in 1976, was recently sold and has an uncertain future. Learn more about the event here.

Visit Skypark Park for food and game booths, along with a 3 p.m. parade along Scotts Valley Drive. The county's only fireworks display will take place in Scotts Valley at 9:15 p.m., with the gate opening at 4 p.m. Learn more here.

Thousands will attend the Spirit of Watsonville Fourth of July parade, which will take place on Main St. Learn more here.