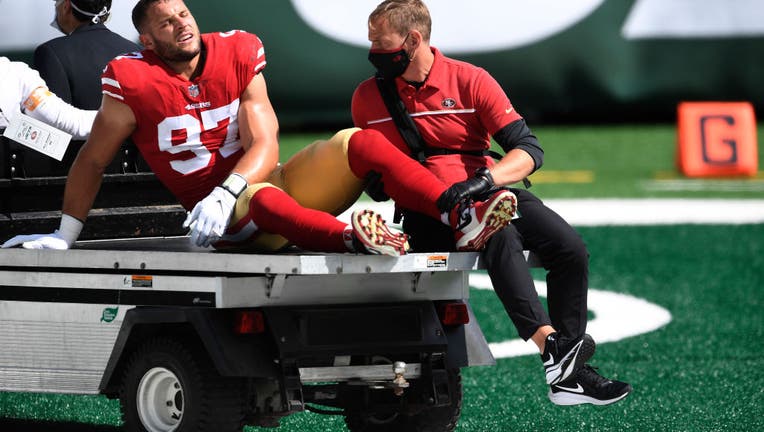 EAST RUTHERFORD, NEW JERSEY - SEPTEMBER 20: Nick Bosa #97 of the San Francisco 49ers is carted off the field after sustaining an injury during the first half against the New York Jets at MetLife Stadium on September 20, 2020 in East Rutherford, New J

And it wasn't even close.

Raheem Mostert ran for an 80-yard touchdown on San Francisco's first play from scrimmage and Jimmy Garoppolo threw two TD passes — before both players sat out the second half with injuries — to lead the banged-up 49ers to a 31-13 victory Sunday.

“When you have key players like those guys keep going down, we all gathered in the huddle and talked about how we have to play for them,” linebacker Fred Warner said. “We played for them and made sure that we stayed locked in.”

It was a costly victory for San Francisco, which was already hurting in a big way before losing Garoppolo to a high ankle sprain and Mostert to an injured knee. Defensive end Nick Bosa and defensive tackle Solomon Thomas were both carted off the field two plays apart with left knee injuries in the first quarter.

The fear is it could be a season-ending ACL injury for Bosa, who'll have tests Monday. So will Thomas, although 49ers coach Kyle Shanahan said there's a better chance for him it's not as serious an ACL injury. Shanahan didn't seem as concerned about the knee injuries for Mostert and fellow running back Tevin Coleman, who also left the game.

“You have a little mixed emotions when you lose some guys like that,” Shanahan said. "When you do lose some good guys like we like we did, that’ll probably be for a while, we need guys to get better.”

Shanahan and the 49ers said the new artificial turf at MetLife Stadium — where they'll play the Giants next week — might have played a role in some of the injuries.

“I know that’s as many knee injuries and ankle stuff and people getting caught on a turf as I’ve ever been a part of,” Shanahan said. “From what I saw, the other team did, too. I know our players talked about it the entire game, just how sticky the turf was.”

It didn't matter against the Jets (0-2), who have also been hit hard by injuries and couldn't muster much.

“We did not play the game we needed to play,” coach Adam Gase said.

The 49ers got going early. Mostert took a handoff on the first play, zipped outside and took off down the right sideline untouched for an 80-yard score. 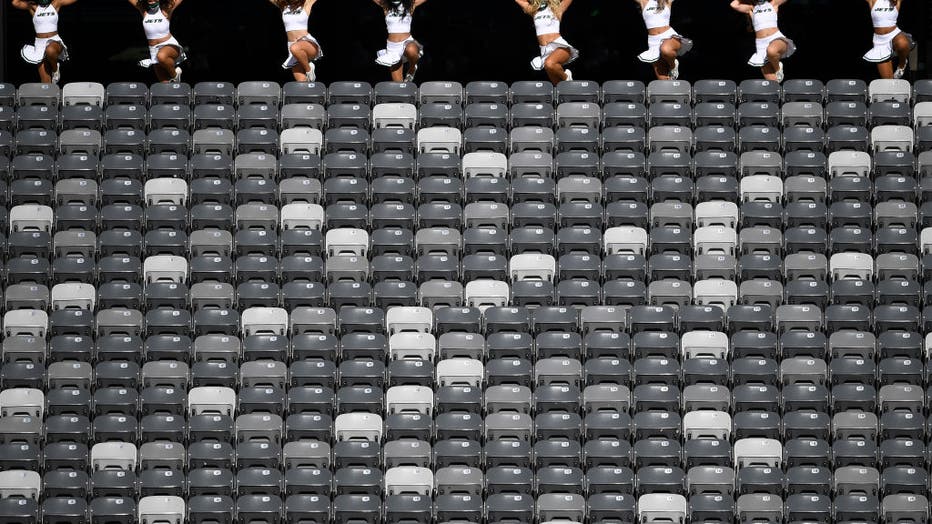 EAST RUTHERFORD, NEW JERSEY - SEPTEMBER 20: The New York Jets Flight Crew cheerleaders perform from the stands during the second half between the San Francisco 49ers and the New York Jets at MetLife Stadium on September 20, 2020 in East Rutherford, N

The strange silence of the eerily empty MetLife Stadium — without anyone in the stands because of the coronavirus pandemic — surely mirrored what it would have sounded like if stunned Jets fans were in attendance.

Garoppolo was injured on the 49ers' next drive when he was sacked by Quinnen Williams. The quarterback went down awkwardly and needed his right ankle taped, but he remained in the game — until halftime.

Things got a lot worse for the 49ers a few minutes later.

Bosa, last season's NFL Defensive Rookie of the Year, was carted off the field after his left leg bent behind him at the end of a 4-yard run by Frank Gore with 6:22 left in the first quarter.

Two plays later, Thomas was carted off — also with a left knee injury — after an 8-yard reception by Chris Hogan.

Sam Ficken's 41-yard field goal cut the deficit to 7-3 for the Jets, but Garoppolo — limping noticeably — drove the 49ers for another TD.

Mostert nearly had another long score on the second play of the drive, but his 67-yard scamper was wiped out by a holding penalty on tackle Mike McGlinchey. San Francisco ended the 14-play possession with an 18-yard catch by Jordan Reed for the first of his two TD grabs.

Garoppolo was 14 of 16 for 131 yards and the two TDs before being replaced by Nick Mullens.

The 49ers started slowly on Mullens' first drive, but Jerick McKinnon had a 55-yard run on third-and-31. The last team to convert a third down that long on a run was Minnesota on Leroy Hoard’s 53-yard scamper on third-and-37 against Denver in 1999.

Sam Darnold threw a 30-yard touchdown pass to Braxton Berrios with 1:23 remaining. He was 21 of 32 for 179 yards and no turnovers. ... Mullens finished 8 of 11 for 71 yards and an interception. ... San Francisco wide receiver Brandon Aiyuk, a first-round draft pick, had two catches for 21 yards in his NFL debut. ... New York rookie running back La'Mical Perine rushed for 17 yards on three carries in his first game.

Playing against the team that drafted him in 2005, Gore had 63 yards on 21 attempts while carrying the load in the backfield for the Jets with Le'Veon Bell on injured reserve with a hamstring injury. The 37-year-old, who played 10 seasons for San Francisco, became the oldest running back in NFL history with 20 or more carries in a game.

The Jets remained in the locker room during the playing of the national anthem, as they did last week. The 49ers stood together on the sideline as wide receiver Kendrick Bourne had his left fist raised.

49ers: return to MetLife Stadium next Sunday to take on the Giants.

Jets: at Indianapolis to face the Colts next Sunday.