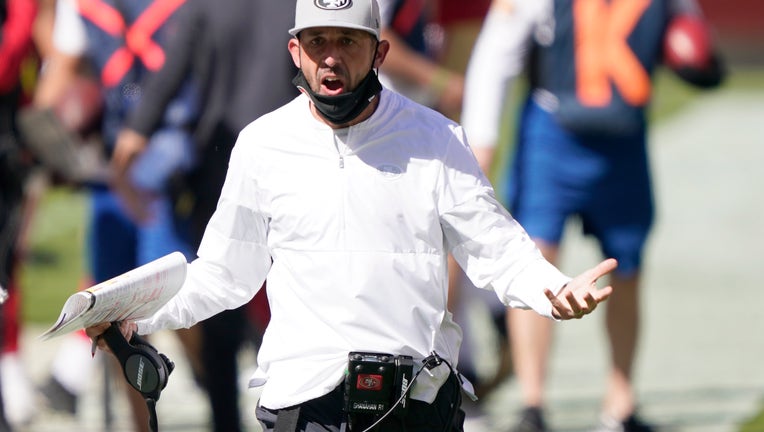 SANTA CLARA, CALIFORNIA - OCTOBER 11: Head coach Kyle Shanahan of the San Francisco 49ers reacts to the officials no call against the Miami Dolphins during the first half of their game at Levi's Stadium on October 11, 2020 in Santa Clara, California.

SANTA CLARA, Calif. - Jimmy Garoppolo dropped back to pass and was unable to push off his injured right ankle. The ball sailed high for his second interception in the closing minutes of the first half and was just one of many forgettable plays for the San Francisco 49ers.

The offensive line struggled in protection and allowed five sacks. The banged-up defense that began the day with a practice squad player at cornerback was gashed for 350 yards by Ryan Fitzpatrick. Garoppolo played his worst game as a pro before getting benched.

It all added to a 43-17 defeat Sunday that sent the defending NFC champion 49ers to their third straight home loss to begin the season.

“Obviously the mood’s pretty down right now, we’re pretty low,” fullback Kyle Juszczyk said. “That’s really embarrassing what we did out there. Everyone sets a standard here and that wasn’t even close to it.”

It started with Garoppolo, who returned to the lineup after missing two games with a sprained ankle. He didn’t look like himself from the start and was pulled at halftime.

Garoppolo finished 7 for 17 for 77 yards, two interceptions and a 15.7 rating. He threw two interceptions in the final two minutes of the first half to set up two Miami field goals that sent the Dolphins to the blowout.

“I felt it,” Garoppolo said of his ankle that he hurt in Week 2 against the Jets. “I wouldn’t say it affected everything. It’s one of those things you have to deal with. Tough one today. I wanted to be out there with the guys and wanted to get the win today. A lot of things didn’t go well for us.”

As bad as Garoppolo was, he had plenty of company on a day that started with the Niners having all their offensive skill position players available for the first time all season.

The line struggled for a second straight week, allowing too much pressure and failing to move the defense on a failed fourth-and-1 attempt in the first quarter.

The passing game averaged just 3.2 yards per dropback in the second worst performance since coach Kyle Shanahan arrived in 2017.

“Our vets have to play better,” All-Pro tight end George Kittle said. “It starts with me. Just our whole unit is not playing very well together. We have the guys to right the ship. No one is jumping off, no one is pointing fingers.”

The defense had it’s own issues on a day when the three starting cornerbacks were all out with injuries. The top backup, Ahkello Witherspoon, was also dealing with a hamstring injury and was only supposed to be used in an emergency.

That emergency came after four possessions as Fitzpatrick repeatedly picked on Brian Allen, who was called up on the practice squad on Saturday.

A 22-yard TD pass to DeVante Parker that made it 21-7 was the final straw and Witherspoon told the coaches he could play and went in after that.

By then it was too late to do much. C.J. Beathard led two scoring drives in the third quarter before the Niners stumbled to the finish

“No one likes getting embarrassed, and that’s kind of what I said at halftime,” Shanahan said. “When you’re getting embarrassed, you go out there and fight and I thought we started to. But we made too many mistakes to where it obviously didn’t look like much of a fight.”