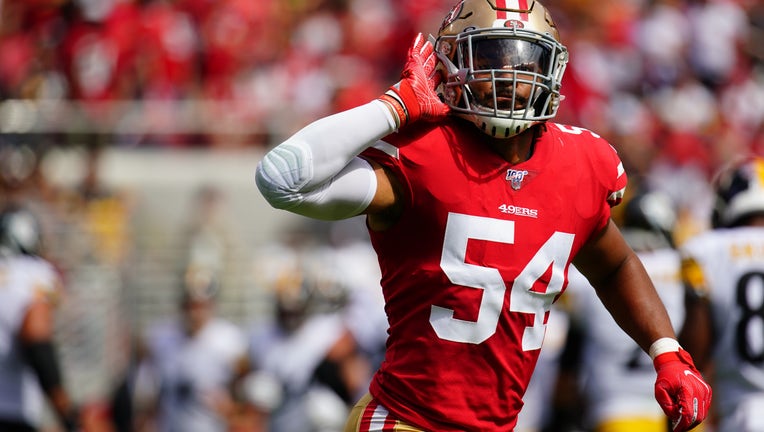 Fred Warner #54 of the San Francisco 49ers reacts to a defensive stop during the second quarter against the Pittsburgh Steelers at Levi's Stadium on September 22, 2019 in Santa Clara, California. (Photo by Daniel Shirey/Getty Images)

WHITE SULPHUR SPRINGS, W.Va. - The San Francisco 49ers will stay at a West Virginia resort later this month rather than return to California between back-to-back games on the East Coast.

The Greenbrier in White Sulphur Springs, W.Va., said in a news release that the 49ers will stay at the resort the week of Sept. 21.

"Further details will come from the 49ers at a later date, but The Greenbrier is excited about welcoming them to West Virginia and again showcasing our incredible football facility,” the resort said.

The Greenbrier has previously hosted training camps for the New Orleans Saints and the Houston Texans.

Built for the Saints, The Greenbrier’s practice facility includes two natural grass practice fields, a synthetic field, and a 55,000-square-foot building with kitchen and dining facilities; meeting rooms; weight and locker rooms; training and physical therapy accommodations. At an elevation of 2,000 feet, the location offers a cooler climate than some NFL teams’ training camps in the summer.

The Arizona Cardinals practiced there for a three-day stretch in 2015, though some players warned of some uninvited guests: ghosts.