OAKLAND, Calif. - Derek Carr passed for 292 yards and a touchdown, Josh Jacobs had his fourth 100-yard game in the last six weeks, and the Oakland Raiders beat the winless Cincinnati Bengals 17-10 on Sunday.

Maxx Crosby had a team rookie-record four sacks as the Raiders harassed Bengals rookie quarterback Ryan Finley and shut down Cincinnati’s offense after Joe Mixon had given it a lift in the first half.

Oakland (6-4) won its third straight to move into a first-place tie with Kansas City in the AFC West. The Chiefs play the Chargers on Monday night in Mexico City.

Cincinnati is headed in the opposite direction. The Bengals are the NFL’s lone team without a victory, and their 0-10 record matches the 1993 team for the worst start in franchise history.

Even when things appeared to be going well for Zac Taylor’s team, something went wrong.

With Cincinnati trailing 17-10 in the fourth quarter, Bengals wide receiver Auden Tate made a 20-yard catch on a third-and-19 play but suffered a neck injury when he was hit from behind by Curtis Riley. Tate stayed down for several minutes and was eventually placed on a cart and taken to the locker room. 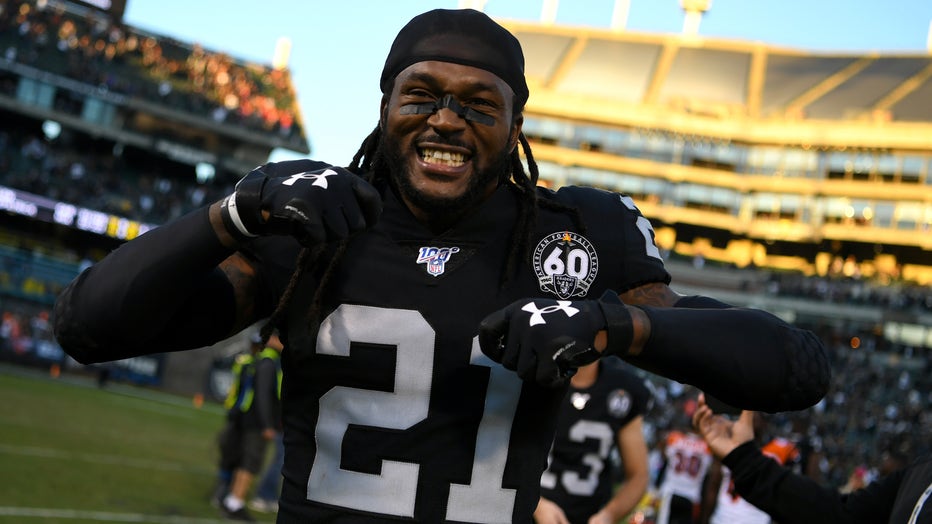 OAKLAND, CALIFORNIA - NOVEMBER 17: D.J. Swearinger #21 of the Oakland Raiders celebrates after defeating the Cincinnati Bengals 17-10 in their NFL game at RingCentral Coliseum on November 17, 2019 in Oakland, California. (Photo by Robert Reiners/Gett

The Raiders, who allowed the Bengals to get their first win in ’93, avoided a repeat by getting strong performances by Carr, Jacobs and Crosby.

Carr completed his first 14 passes, including a 2-yard touchdown to Foster Moreau. Carr ran in from 3 yards out for Oakland’s other touchdown.

Jacobs ran for 112 yards on 23 carries, continuing his push for Offensive Rookie of the Year. The 24th overall pick in the draft, Jacobs has 616 yards in the last six games.

Crosby had his best game by far. He had a sack and forced fumble to end Cincinnati’s first drive, dropped Finley again in the third quarter and then sacked him twice in the fourth.

Trayvon Mullen made a game-clinching interception in the fourth.

Jacobs’ first fumble of the season set up Cincinnati’s only touchdown.

Mixon took a handoff from Finley and started to his right into a wall of defenders, then cut back the opposite direction and scampered into the end zone to give the Bengals an early lead.

Incredibly, it was the Bengals’ first rushing touchdown this season by someone other than quarterback Andy Dalton (three). Dalton lost his starting job to Finley after Week 8.

Mixon finished with 86 yards on 15 carries.

In addition to the scary injury to Tate, Cincinnati lost cornerback William Jackson and defensive end Carlos Dunlap to injuries in the fourth.

Raiders: At the New York Jets next Sunday, the first of two straight road games for Oakland.