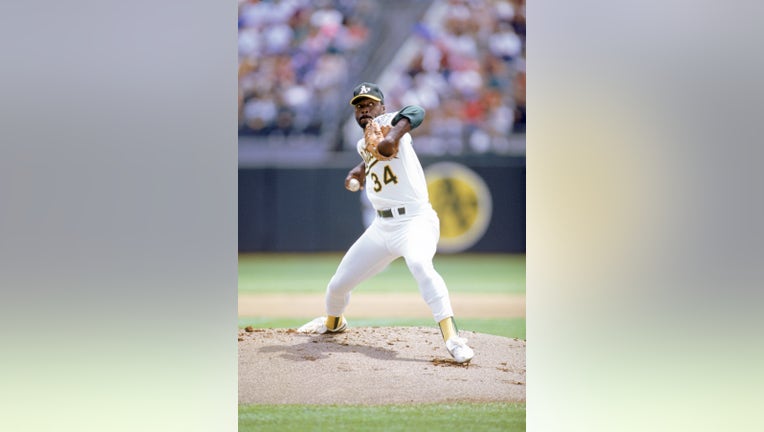 On Sunday the Oakland A’s will honor legendary pitcher, Dave Stewart, by retiring his no. 34 jersey.

Stew, as he was called by just about every A's fan, spent eight seasons with the team. He helped them beat the San Francisco Giants in the 1989 World Series where he also took home MVP honors.

Stewart, an Oakland native, and graduate of St. Elizabeth High School, grew up just blocks from the coliseum where he would later have some of his best performances.

"To know that my name and number at a ballpark I used to sneak into and watch baseball games since I was 11 years old, It's something that I can't even put into words," said Stewart. "It’s going to take me a while to grasp the real magnitude of it."

Stewart now wants his work and legacy to serve as inspiration for the next generation of kids in Oakland.

"Understand that anything can happen you have to allow yourself to dream next thing you have to do is make the dream a reality," Stewart said.

Stewart’s wife, Lonnie Murray, said friends and family are coming from all over the globe to celebrate the occasion, that was delayed two years because of the pandemic. Stewart’s former teammates and baseball executives including Wally Haas and Tony LaRussa will also be at the ceremony.  But, Murray said two important people will be missing.

"When it was originally planned for 2020, we had his mother and stepfather since that time we've lost them both so that makes this a different experience,"

Stewart was incredibly close to his mother and stepfather.

"I know how much that’s keeping him somewhat detached from fully experiencing the moment," said Murray. "It’s probably going to be more meaningful once it’s over, and he reflects."