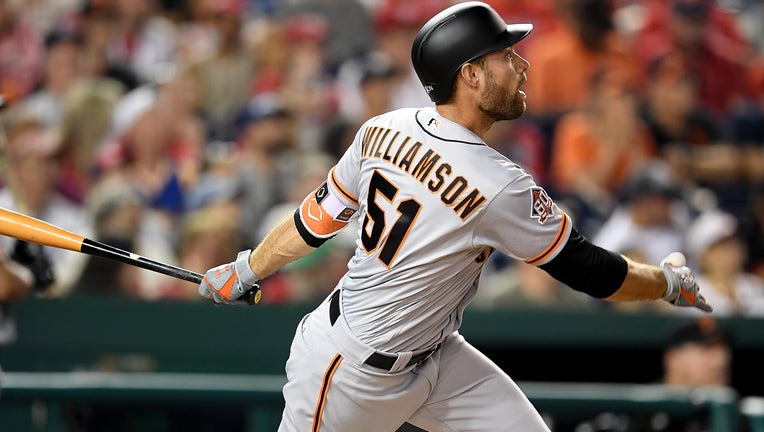 Mac Williamson #51 of the San Francisco Giants bats against the Washington Nationals at Nationals Park on June 8, 2018 in Washington, DC. (Photo by G Fiume/Getty Images)

SAN FRANCISCO - Former San Francisco Giants outfielder Mac Williamson is suing the organization for a concussion he sustained in 2018 after stumbling over a bullpen mound in foul territory and crashing headfirst into a padded wall.

The rare lawsuit was filed to hold the owners of Oracle Park accountable for having an unnecessary hazard on the field, Williamson said in a virtual news conference Tuesday. The stadium's owner and operator China Basin Ballpark Company is listed as the defendant. Williamson, a 30-year-old unsigned free agent, said he deals with lingering symptoms every day, including vision issues, nausea, trouble sleeping and mood swings.

"My life hasn’t been the same since suffering the injury," Williamson said in a statement. "The concussion ended my career and left me with life-long injuries that have also taken a significant toll on my personal life."

In April 2018, Williamson was running full speed when he tripped over the bullpen mound, which previously sat inside foul territory, and hit his head on the left field wall. He was slow to get up but went on to hit a deciding home run that helped seal a 4-3 win against the Washington Nationals before beginning concussion protocol.

Giants’ late owner Peter Magowan apologized to Williamson after the injury and admitted the bullpen mounds were on the field against the wishes of then-MLB Commissioner Bud Selig, citing player safety concerns, according to Williamson’s San Francisco-based attorney Randy Erlewine.

The Giants acknowledged the associated risk and moved the bullpen behind the outfield wall before the 2020 season. They were one of three Major League teams to have bullpens on the field. Both the Oakland A’s and Tampa Bay Rays still have there’s in place.

Erlewine suggested the injury cost his client "tens of millions of dollars," comparing Williamson to power-hitting outfielders and their earnings, though an exact figure Williamson is seeking in the lawsuit filed in San Francisco Superior Court was not specified.

"My injuries could have been avoided if not for the park's failure to relocate the bullpens to where they belong in the first place," Williamson said. "Trying to fight through the concussion over the past two and a half years has been extremely difficult both personally and professionally."

Williamson was drafted in the third round by the Giants in 2012 and made his MLB debut in 2015, where he played some of five seasons with the Giants. Struggling to become an everyday player, Williamson recrafted his swing with private hitting coach Doug Latta before the 2018 season. His bat looked strong in Triple-A and promising when he was called up on April 20. Four days later, he crashed into the wall.

The 6-foot-4, 230-pound outfielder played for the Seattle Mariners in 2019, and then 40 games in the Korean Baseball League this year. He insists that all along he’s battled post-concussion symptoms.

"My time in baseball has effectively come to an end," Williamson said. "Everybody’s career ends at some point, but to have it taken from me because the bullpen mounds were unnecessarily placed on the field is difficult to cope with."

Enter the NFL Challenge contest on the FOX Super 6 app for free and you can win $1 million. Download now.