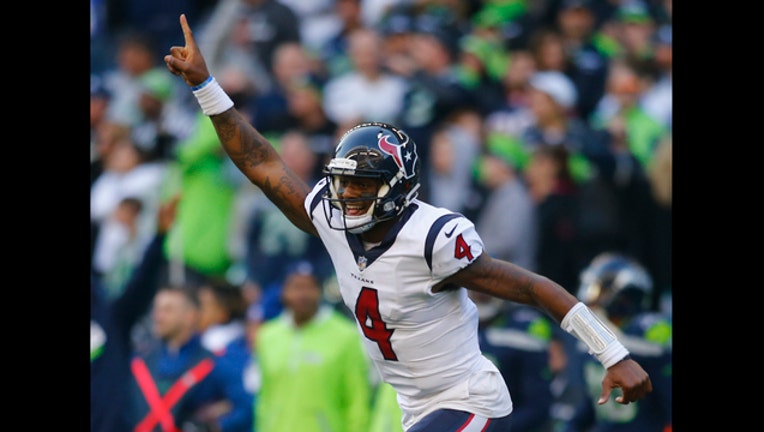 Quarterback Deshaun Watson #4 of the Texans cheers as DeAndre Hopkins #10 scores a 72 yard touchdown against the Seattle Seahawks in the fourth quarter at CenturyLink Field on October 29, 2017 in Seattle. (Photo by Jonathan Ferrey/Getty Images)

HOUSTON (AP) - Star quarterback Deshaun Watson credits his mother for much of his success, saying she spent years encouraging him to chase his dreams.

Now that Watson has achieved one of his biggest goals of reaching the NFL, the Houston Texans is giving back to her by renovating the home he grew up in.

"She is my rock, my hero," Watson said. "She always was there giving 100 percent each and every day to try to be the best she can be to help her kids be successful."

It's been well-documented that the Watson family received a home from Habitat For Humanity when Deshaun was 11 years old in Gainesville, Georgia. His mother still lives in that house, but now that he's receiving NFL paychecks he decided it was time to spruce it up.

His mother is a survivor of throat cancer and watching her fight through the disease made him even more determined to do something special for her.

"She deserves it," Deshaun said. "It's been a solid home for us for ... over 12 years now. (But) living room, kitchen and dining area, those areas need a little touch up. Everything she went through, this is really the smallest thing I can do for her."

Watson chronicled the spiffy makeover of his mother's living room, dining room and kitchen on an online show called "My Houzz," which can be seen here, and used the renovation website houzz.com to plan and carry out the project.

On Tuesday, Watson wrote, "My mama deserves the world!" in a tweet that included a link to the My Houzz segment featuring the renovation.

Watson worked with a contracting team he found on the website, but he selected everything for the renovation. He picked the perfect lights, the color scheme, artwork for the wall, the right bar stools and kitchen cabinet, among dozens of other additions. Watson was thrilled to learn he could add a fireplace, something his mother had long wanted.

He was pleased when told there'd be no need to build a chimney because it was an electric fireplace that starts with the flip of a switch.

The 23-year-old Clemson graduate got a look at the completed project before unveiling it to his mother, and he loved how everything turned out. When his mother arrived, he greeted her outside and held her hand as she closed her eyes before he led her into the fabulous upgraded space. When she opened her eyes and gazed around the room, a huge smile spread across her face. Her son's smile was just as broad.

He was right about the fireplace, too. It was one of the first things Deann commented on.

She walked around her renovated home with wide eyes, taking in all the beautiful changes. She was also excited to see that her microwave, which formerly took up counter space, was now built into one of the cabinets.

"I never thought it would be like this," she said. "It's beautiful."

Watson enjoyed the challenge of leading this project, but the best moment came when he saw the joy the gift brought his mom.

"I could just see it in her eyes," Watson said. "She was very moved. Everything that she saw, she loved it. Being a son and being able to take care of your momma and help her out felt good."