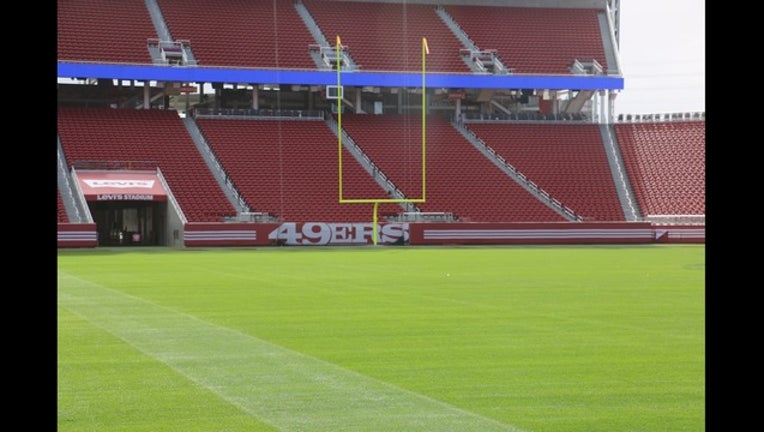 SANTA CLARA, Calif. (AP) — When architects set out to design a new stadium for the San Francisco 49ers, they wanted a building that fit the Silicon Valley region where it is located.

Retro was out. High-tech and green-friendly were in.

That was mostly accomplished at the $1.3 billion Levi's Stadium when it opened in the summer of 2014. There's the in-stadium app that allows fans to watch replays, order food and figure out which bathrooms have the shortest line; the environmentally friendly features that help the stadium achieve zero net energy use on game days; and the open-air feel that helps fans take in the Bay Area.

After 18 months of mostly good reviews for events ranging from football to concerts to WrestleMania and even an outdoor hockey game, Levi's Stadium truly arrives on the big stage Feb. 7 when more than 100 million people will watch it host the Super Bowl between Denver and Carolina.

"We set out to design the next generation of the NFL stadium," said Tim Cahill, a senior vice president and chief design officer at HNTB Corporation. "That's what we're most proud of."

The stadium was originally designed to be at Candlestick Point, where the 49ers played from 1971-2013. But then the York family that owns the team decided to locate it at the team's full-time facility more than 40 miles away in Santa Clara in the middle of Silicon Valley.

Levi's Stadium was home to the first mobile app designed to enhance every aspect of a fan's stadium experience, from steering fans to their parking spots to identifying the least-crowded restrooms. Fans can order food and drinks that can be delivered directly to their seats and watch replays from four different camera angles on their phones or tablets.

With as many as 70,000 fans using devices throughout the game, the designers had to create a backbone that could handle that kind of heavy use. The stadium features 400 miles of fiber optic cable providing stadium-wide Wi-Fi capability and HD video boards.

Lanson Nichols, a vice president and senior projects manager at HNTB, said Levi's has triple the fiber-optic backbone of other NFL stadiums as part of the plan to "future-proof" the building.

"Being in the heart of Silicon Valley it just became a natural that this had to be the most advanced stadium in the country just being in the middle of that culture," Nichols said. "People expected not just cutting edge, but bleeding edge technology."

One of the highest priorities in the design was making the stadium as environmentally friendly as possible and that was realized when Levi's became the first football stadium to receive LEED Gold certification.

That was accomplished with nearly 20,000 square feet of solar panels, a 27,000-square-foot living roof above the suites planted with native California species, 80 percent of the water used coming from recycled water and efficient use of electricity that allows the stadium to be a net zero energy user on game days.

"From day one, that is something the York family and Santa Clara wanted to make a statement that 'Why can't a stadium be green?'" Cahill said.

The biggest flaw from the first two seasons of the stadium should not be an issue for the Super Bowl. The 49ers had several problems with the turf at the start that led to players slipping on the grass and chunks of sod coming loose. The team had to move practices this summer out of the stadium because of those issues. But after making changes to the base of the field earlier this season, the turf has mostly held up and should be in good shape for the game.

NFL field director Ed Mangan, working his 27th Super Bowl, oversaw the installation of a brand new field earlier this month. The 75,000 square feet of grass from West Coast Turf in California's Central Valley was all in place by Jan. 12 and a crew of about three dozen workers has been mowing, painting and protecting the field ever since.

Preparing a field for a Super Bowl is a tall task with it getting heavy use from pregame and halftime performers, who must rehearse at the stadium as well as the players. Mangan's staff will keep the field tarped as much as possible during those rehearsals to keep it fresh and will do on-the-fly maintenance when necessary after the show on game day.

"It's not just the game we're preparing this field for," he said. "It's all the activities that will be on this field, the pregame and halftime shows. They all get the field starting this weekend."