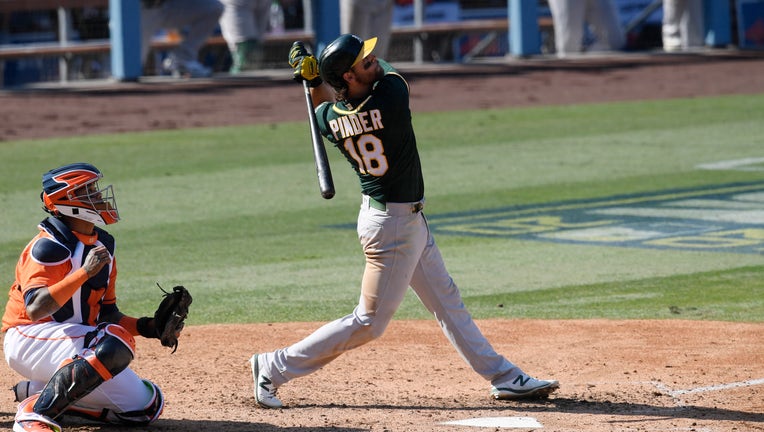 Chad Pinder #18 of the Oakland Athletics hits a three run home run against the Houston Astros during the seventh inning in Game Three of the American League Division Series at Dodger Stadium on October 07, 2020 in Los Angeles, California. (Photo by H

LOS ANGELES - Chad Pinder tied the score with a three-run homer in the seventh inning, Sean Murphy hit a go-ahead sacrifice fly in the eighth and the Oakland Athletics rallied past the Houston Astros 9-7 on Wednesday to avoid elimination in their AL Division Series.

Houston leads the best-of-five series 2-1 and can advance to its fourth straight AL Championship Series with a victory in Game 4 on Thursday.

Houston’s bullpen had stifled Oakland in the first two games with seven shutout innings of one-hit relief, but Pinder ended that dominance.

Houston led 7-4 when Marcus Semien and Tommy La Stella had back-to-back singles off Josh James starting the seventh. Pinder hit a first-pitch slider to the opposite field for Oakland’s fifth homer, a drive chased by right fielder Kyle Tucker until he ran out of room at the short wall.

The teams have combined for 18 homers — including seven in Game 3 — in the neutral-site series at Dodger Stadium featuring all day games. After two straight days in the 90s, the temperature cooled to 81 degrees.

La Stella was hit on his right forearm, loading the bases and forcing La Stella from the game. Pinder, who went 3 for 4 with four RBIs, followed with another sacrifice fly in the eighth.

Carlos Correa singled leading off the bottom of the eighth and Tucker reached on catcher’s interference by Murphy, a call the A’s challenged unsuccessfully.

Yuli Gurriel popped out, Aedmys Díaz advanced the runners with a groundout, and pinch-hitter Josh Reddick struck out, smashing his bat on the ground and breaking it over a knee.

Houston took a 7-4 lead with five runs in the fifth, when the Astros sent 10 batters to the plate. Díaz hit a tying, two-run homer off rookie starter Jesús Luzardo, and Brantley, Bregman and Tucker drove in runs. Houston was slowed when José Altuve was thrown out on a relay by Olson at first when he tried to go from first to third on Brantley’s single.

Both starters allowed up four runs and five hits in 4 1/3 innings Luzardo and Houston’s José Urquidy.

Zack Greinke’s right arm is structurally sound and the Astros say they are hopeful he can pitch at some point in the postseason. The right-hander started Game 1 of the AL wild card series on Sept. 29, but was lifted after allowing one run and two hits and three walks in four innings. Greinke tailed off late in the season, posting a 5.73 ERA over his final seven starts; in that span, dating to Aug. 23, he gave up at least three runs in each outing. He off flat ground after the Astros’ win in Game 2 and manager Dusty Baker said he was told the session went “pretty good.”