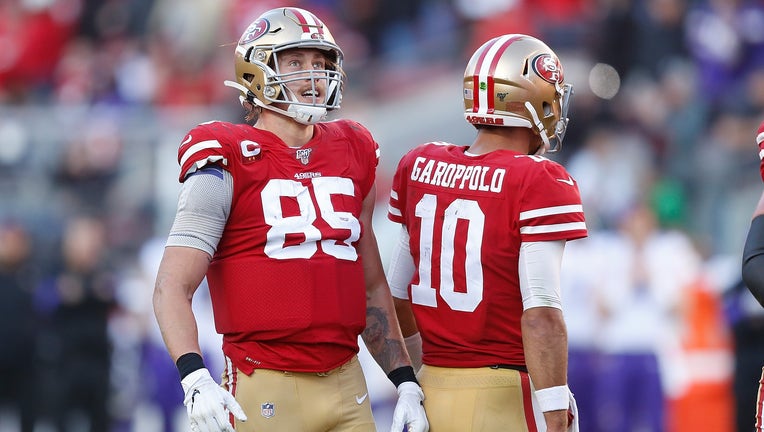 SANTA CLARA, CALIFORNIA - JANUARY 11: George Kittle #85 and quarterback Jimmy Garoppolo #10 of the San Francisco 49ers react after a play in the third quarter of the NFC Divisional Round Playoff game against the Minnesota Vikings at Levi's Stadium on

SANTA CLARA, Calif. - Two key players with the San Francisco 49ers are expected to miss extended time due to injuries sustained in Week 8. It’s a tough development in a season jam-packed with relentless injury news.

Now near the season’s halfway point, quarterback Jimmy Garoppolo is expected to miss a minimum of six weeks after aggravating a high ankle sprain in Sunday’s loss to the Seattle Seahawks, ESPN’s Adam Schefter said Monday. If the quarterback needs surgery, he could be out longer and potentially for the season.

Tight end George Kittle left the field hobbling with an apparent foot injury in the fourth quarter on Sunday after catching a pass from Nick Mullens, Garoppolo’s replacement. Additional tests revealed he broke a bone in his foot, according to ESPN. The First-Team All-Pro will be sidelined for 8 weeks, which means his season is virtually over, since all that remains are eight games and a bye week.

Kittle, who signed a five-year, $75 million contract extension during training camp, is the team’s top receiver with 474 yards on 37 receptions. He missed two weeks earlier in the season after suffering a high ankle sprain of his own.

On top of being down two offensive captains, the beat-up 49ers are dealing with a short week. They’ll host the Green Bay Packers on Thursday night. Tight end Jordan Reed, who went down with a Week 3 knee injury and is still on the injured reserve, resumed practice last week but likely won’t be ready for Thursday night.

As for the quarterback role moving forward, Mullens, who led three touchdown drives after replacing Garoppolo, assumes the starting role. Garoppolo left the game with his team trailing 30-7 after going 11-for-16 for 84 yards. Mullens relieved the 29-year-old quarterback and completed 18-for-25 for 238 yards with two touchdowns, helping his confidence recover after his last outing where he was benched for a disastrous three-turnover start.

The Kittle loss is not only a blow to the team’s receiving core but also to their run game, as the tight end has proven himself among the league's elite blockers. Running backs Raheem Mostert and Jeff Wilson Jr. are already on the injured reserve, and Tevin Coleman re-injured his knee on Sunday, meaning the 49ers are left with JaMycal Hasty and Jerick McKinnon for healthy running backs.

Enter the NFL Challenge contest on the FOX Super 6 app for free and you can win the $1M jackpot! Download now.