Former NFL player and current Fox Sports NFL analyst Jonathan Vilma spoke with KTVU's Jason Appelbaum about Sunday's match against the Seahawks, as well as what the 49ers will prioritize once the season wraps up.

SANTA CLARA, Calif. - The stakes for this season’s finale between fierce NFC West rivals Seattle and San Francisco are far more one-sided that a year ago.

Instead of a prime-time showdown for a division title, the Seahawks are fighting for the possibility of a first-round bye, while the 49ers are playing out the string of a disappointing season.

"Honestly, it’s no different than last year when you’re playing for home-field advantage and playing for the West," 49ers coach Kyle Shanahan said. "I know it is mentally to some people, and if you let the mental part of that change how you go about yourself, it’ll be a joke in what you put on tape and what you put on the field."

The 49ers (6-9) are trying to show enough to spoil things for the Seahawks (11-4) when the teams play Sunday at the Niners' temporary home in Arizona.

Seattle clinched the division last week and is still in the running for the top seed and the lone bye in the NFC in the expanded seven-team playoff format. 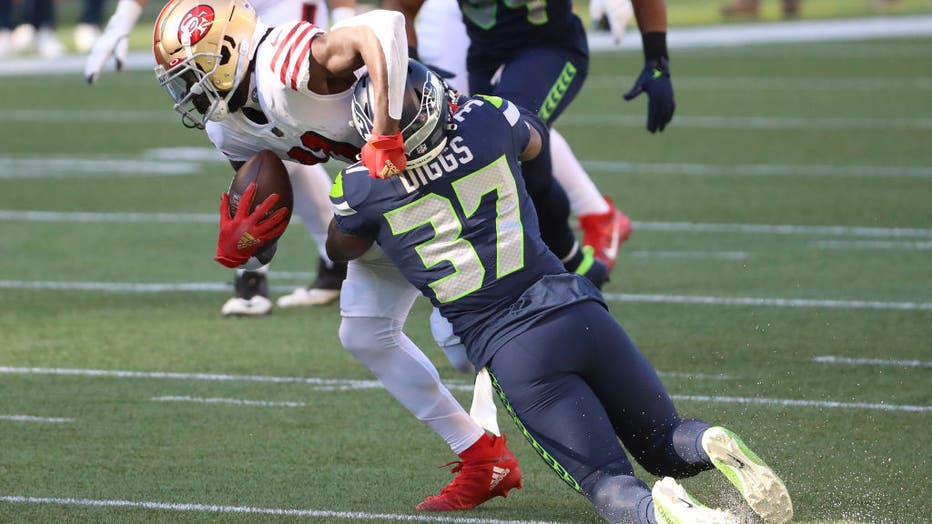 SEATTLE, WASHINGTON - NOVEMBER 01: Brandon Aiyuk #11 of the San Francisco 49ers is hit by Quandre Diggs #37 of the Seattle Seahawks in the first half of the game at CenturyLink Field on November 01, 2020 in Seattle, Washington. (Photo by Abbie Parr/G

The Seahawks will earn the top seed with a win and losses by Green Bay and New Orleans. They can move up to the No. 2 seed with a win and a loss by the Packers or the Saints, which would guarantee them a home game if they advance to the divisional round.

Coach Pete Carroll made clear the Seahawks are "going for it" even though the odds might be against them to get the top seed.

DK Metcalf and Tyler Lockett are likely to set team records for Seattle. Metcalf needs 5 yards to move past Steve Largent for the most yards receiving in a single season. Largent set the record of 1,287 back in 1985. Metcalf seemed set to zoom past the mark much earlier, but has just one game over 100 yards receiving in the past seven. Earlier this season, Metcalf had 12 catches for 161 yards and two TDs against the 49ers.

Lockett needs 36 yards receiving to reach 1,000 for the season. It would make Lockett and Metcalf the second duo in franchise history to have 1,000 yards in the same season, joining Joey Galloway and Brian Blades in 1995. It would also be the second straight 1,000-yard season for Lockett, something done by only five players in team history.

C.J. Beathard made his first start at quarterback in more than two years last week for the 49ers with Jimmy Garoppolo and Nick Mullens out with injuries. Beathard looked more comfortable than in his two stints as starter in 2017-18, completing 13 of 22 passes for 189 yards and three TDs. Most importantly, he threw no interceptions after having 12 in his first 12 starts.

Seattle’s Week 8 victory over the 49ers was the start of its defensive turnaround and an uptick in its pass rush. The Seahawks had three sacks, which to that point was a big day from the pass rush. But it proved to be a spark, and including that game, the Seahawks have 34 sacks in the past nine outing, the most in the league.

Seattle has at least two sacks in every game and it’s been a wide range of players getting to the quarterback. Jamal Adams leads the way with 9 ½ on the season, but six others have at least three sacks. Bobby Wagner had two of his three sacks on the season in the last meeting with San Francisco.

The kicking game could be a bit of an adventure for the 49ers after placing kicker Robbie Gould and long snapper Taybor Pepper on the COVID-19 list. San Francisco signed Colin Holba and planned to bring in former Minnesota practice squad kicker Tristan Vizcaino for placekicking once he passed coronavirus protocols. Vizcaino has never appeared in an NFL game but made 12 of 19 field goals in college in 2017 at Washington.