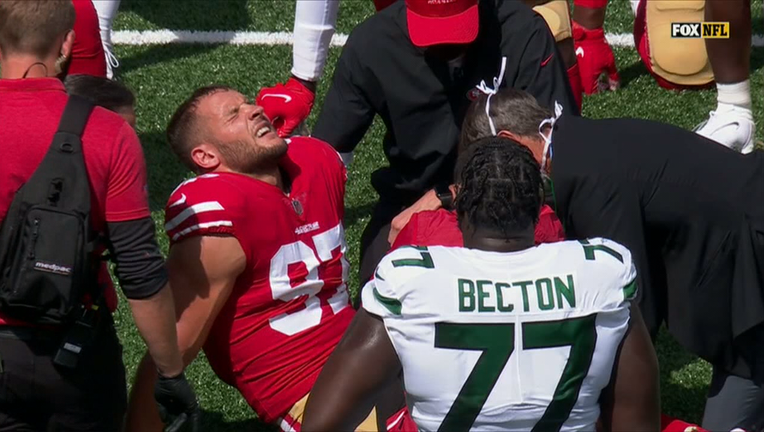 SANTA CLARA, Calif. - The San Francisco 49ers’ week-two win hardly feels like a victory after tallying up all the injuries the team absorbed.

They were already down All-Pro tight end George Kittle (knee) and star cornerback Richard Sherman (calf) heading into Sunday’s matchup with the New York Jets. By the end of the 31-13 win, the team saw their quarterback, top running back, and two starters on the defensive line go down with lower-body injuries.

“That’s as many knee injuries and ankle stuff and people getting caught on the turf that I’ve ever been a part of,” said coach Kyle Shanahan. “Our players talked about it the entire game, how sticky the turf was.”

Jimmy Garoppolo hobbled his way through the first half after suffering a high ankle sprain on the 49ers’ second possession. He didn’t play in the second half. Then, reigning Defensive Rookie of the Year Nick Bosa was carted off the field with a knee injury. The team fears it could be his ACL and season-ending.

Bosa is slated to have more tests Monday, so will Soloman Thomas, who also left the game on an injury cart just two plays later.

Raheem Mostert, who opened the game with an 80-yard touchdown run, also hurt his knee. His backup Tevin Coleman did, too. The 49ers believe Mostert suffered a mild MCL sprain and he will undergo an MRI to see how much time he'll miss.

The NFL said the field at MetLife Stadium was inspected from an independent inspector on September 12 and it was determined the surface “was in compliance with all applicable NFL policies, including the Mandatory Practices for Artificial Surfaces,” according to a statement, per NFL Network’s Ian Rapoport.

Additionally, the league said teams must certify that their fields are in compliance with NFL policy within 72 hours of each home game and that occurred in this instance.

The 49ers will return to Metlife Stadium for Week 3 when they face the New York Giants on Sunday at 10 a.m.