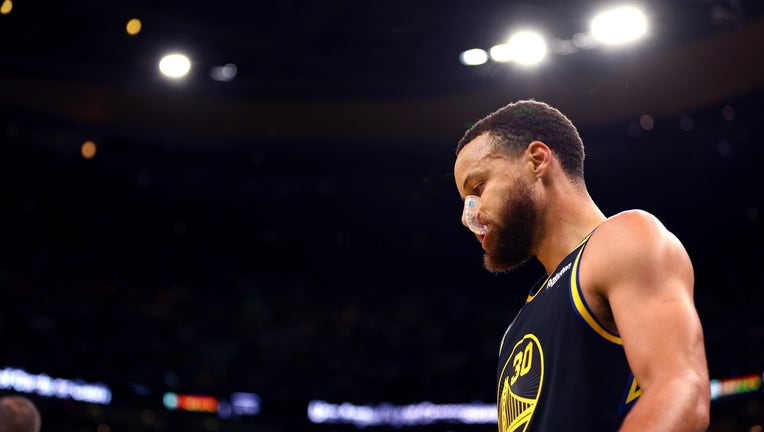 BOSTON, MASSACHUSETTS - JUNE 10: Stephen Curry #30 of the Golden State Warriors looks on in the first quarter against the Boston Celtics during Game Four of the 2022 NBA Finals at TD Garden on June 10, 2022 in Boston, Massachusetts. (Photo by Elsa/Ge

Golden State Warriors superstar Steph Curry said his team explored the possibility of a blockbuster trade for former Warrior Kevin Durant back to the Bay Area.

In an interview with Rolling Stone, Curry said he believes the Warriors can win back-to back titles as the team did when Durant was playing with Curry. When Durant left the west coast for the east coast, joining the Brooklyn Nets, his break-up by with the Warriors was seen negatively by many. But, Curry said he believes Durant was "misunderstood" and called Durant a "really good dude."

"I think he has had certain things happen in his life that hurt his ability to trust people around him, in a sense of making him feel safe at all times. So all of those things, I understand, having played with him and gotten to know him. I love that dude," said Curry.

Curry told Rolling Stone when Durant requested a trade from the Nets in June, that Curry spoke with his brother, Seth, about Durant possibly returning forming another superteam.

Come August, when Durant was still on the market, Curry said the Warriors discussed the trade more seriously. "There was a conversation internally about ‘If he was available, would you?’ I was never hesitant. Every team has those conversations, and obviously, they’re gonna call me and ask, ‘How do you feel about it?’

In the interview, Curry said he had fun playing with Durant during his three years in the Bay Area and said he was excited about the thought of the two being reunited.

"Then you have to think: What does that actually mean? What does it look like? You tell me I’m playing with [current Warriors teammates Andrew Wiggins, Jordan Poole, and Draymond Green], I’m like, ‘Hell, yeah!’ There’s all types of emotion and things that happen to the league. And if anybody’s saying that you wouldn’t entertain that conversation — no disrespect to anybody on our team — you don’t know how things work. But you also understand, like, if we run this thing back, I’ve got complete confidence in my team that we can win it again."