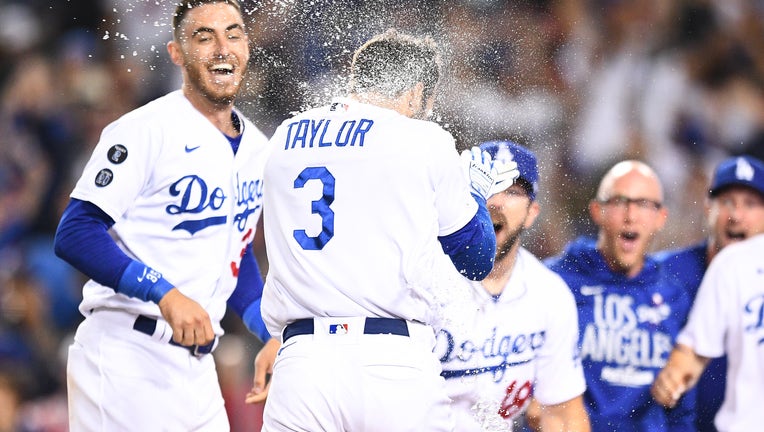 He proved a pain in the neck to the St. Louis Cardinals in the bottom of the ninth inning.

Taylor hit a two-run homer  to lift the Los Angeles Dodgers to a 3-1 victory Wednesday night in a scintillating NL wild-card game.

Justin Turner homered early and the 106-win Dodgers advanced to a best-of-five Division Series against the NL West champion Giants, who won 107 games to barely hold off rival Los Angeles for the division title. Game 1 is Friday night in San Francisco.

"That's gonna be fun. Yeah, two of the best regular-season records of all-time. We've been battling all year, so I expect a hard-fought series," Taylor said.

The Dodgers celebrated on the field before heading into their clubhouse to continue the party. Beer and champagne were poured over the heads of shirtless, goggle-wearing players.

The sellout crowd of 53,193 hung on every pitch as the tension of a tie game built from the fourth inning on. Fans waved blue towels, futilely urging on the few balls launched into the outfield only to see them caught in a winner-take-all matchup between two of the National League's most storied and successful franchises.

Cody Bellinger drew a two-out walk from T.J. McFarland and stole second in the ninth, when nearly every fan was on their feet, anxiously waiting to see if the defending World Series champions could pull off a win.

"That's huge, knowing I don't have to do too much," said Taylor, batting in the No. 9 slot after entering to play left field as part of a double switch in the seventh. "It kind of settled me down a little bit."

Alex Reyes came in to face Taylor, who sent a 2-1 breaking ball into the left-field pavilion, triggering an explosion of cheers.

"Honestly, I was just trying to hit a single. Not trying to do too much," Taylor said after launching the fourth walk-off homer in Dodgers postseason history. "He gave me a good slider to hit and I was able to get it up in the air."

Tommy Edman dropped a one-out single into right off closer Kenley Jansen in the top of the ninth and stole second. Paul Goldschmidt took a called third strike and Tyler O'Neill went down swinging to end the threat.

The Dodgers' bullpen stymied the St. Louis hitters, allowing just a pair of singles after the fifth inning.

"The whole bullpen stepped up. We've been doing it the whole year," Jansen said. "Off we go up north now."

Both teams had runners on in the sixth, seventh and eighth innings, but couldn't push a run across.

St. Louis finished 0 for 11 with runners in scoring position, stranding 11 overall. The Cardinals went on a 17-game winning streak in September to grab the second wild-card spot, only to see their playoff dreams squelched.

"That's a clubhouse full of guys that are hurting," manager Mike Shildt said.

Dueling aces Adam Wainwright of St. Louis and the Dodgers' Max Scherzer struggled with their control early in just the second winner-take-all game in postseason history with two starting pitchers aged 37-plus. Wainwright is 40; Scherzer is 37.

"They were relentless," Wainwright said of the Dodgers. "We had our chances to win that game."

Wainwright and Scherzer issued two walks apiece through the first three innings. Scherzer's wild pitch led to a run in the first and he plunked Harrison Bader in the fourth.

Turner tied it at 1 in the fourth on a leadoff solo shot into the Dodgers' bullpen in left. It was the first homer Wainwright has ever given up on a curveball in the postseason. Turner's 13 postseason homers are the most in franchise history.

St. Louis led 1-0 when Edman scored on Scherzer's wild pitch. Edman singled leading off, stole second base and went to third when O'Neill fouled out to right.

Scherzer left with one out in the fifth after giving up a leadoff single to Edman and a walk to Goldschmidt. He paced the dugout with his hands on his hips. Former Cardinal Joe Kelly got out of the jam after Goldschmidt reached third on a wild pitch.

Scherzer allowed one run and three hits, struck out four and walked three against his hometown team.

"Pins and needles all night long. What an effort by our guys," a shirtless Scherzer said during a postgame interview with TBS on the field. "Now we party."

Wainwright gave up one run and four hits in 5 1/3 innings. He struck out five and walked two.

The Dodgers had Wainwright on the ropes in the third, loading the bases with one out. He was within one ball of walking in the tying run before Trea Turner broke his bat grounding into an inning-ending double play on a 3-2 pitch.

Nationals outfielder Juan Soto sat behind the plate wearing a Trea Turner jersey from his time in Washington. Soto finished second to Turner, his former Nats teammate, for the NL batting title. Turner won his first batting crown with a .328 average.

Soto said he wanted to support his teammates and "see their face when I surprise them."

"When I saw him during the game I was laughing for him to be wearing my jersey," he said.

UP NEXT
Cardinals: Pitchers and catchers report for spring training in mid-February.
Dodgers: Open the best-of-five NLDS against San Francisco on Friday. They were 9-10 against the Giants this season.
------
More AP MLB: https://apnews.com/hub/MLB and https://twitter.com/AP--Sports