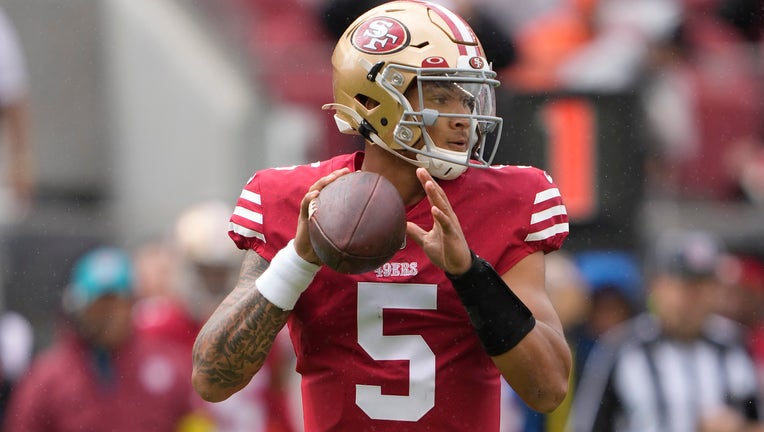 SANTA CLARA, CALIFORNIA - SEPTEMBER 18: Trey Lance #5 of the San Francisco 49ers looks to pass the ball against the Seattle Seahawks during the first quarter at Levi's Stadium on September 18, 2022 in Santa Clara, California. (Photo by Thearon W. Hen

Lance broke his right ankle during the first quarter of Sunday's 27-7 victory over the Seattle Seahawks. The team's former starting quarterback, Jimmy Garoppolo, played the remainder of the game in Lance's absence.

Lance's surgery was performed at Stanford Hospital, it repaired two injuries to his ankle, a fibula fracture and ligament disruption.

The 49ers say Lance will now start the rehab process. The team's head doctor, Dr. Tim McAdams, is confident that Lance will recover completely in time for a full return in the 2023 season.

After the game, 49ers head coach Kyle Shanahan said the mood in the locker room was somber.

"It's always tough, especially when it's a big one like that," Shanahan said. "You feel for someone so bad. It's sad but you don't have time to sit there and think about it. You've got to get right back to the game, and the guys did a real good job of that. I'm really happy about the win, but it's a little somber once you get in the locker room."

Four days prior to Lance's injury, Shanahan was asked if he was concerned about the amount of time Lance got hit and spent on the ground.

"We will watch the tape, I'll ask him how he feels," said Shanahan. "That's the kind of game it was."

Lance was heavily criticized after his week one performance in Chicago he completed 13 of his 28 pass attempts, tallying 164 yards. He threw one interception and zero touchdowns.

Jimmy Garoppolo will start for the Niners while Lance recovers.

"I feel terrible for Trey, I've been on that side of it," said Garoppolo. "This league is tough and everyone has their share of injuries. I feel bad for him, but he's our brother, and we'll pick him up."