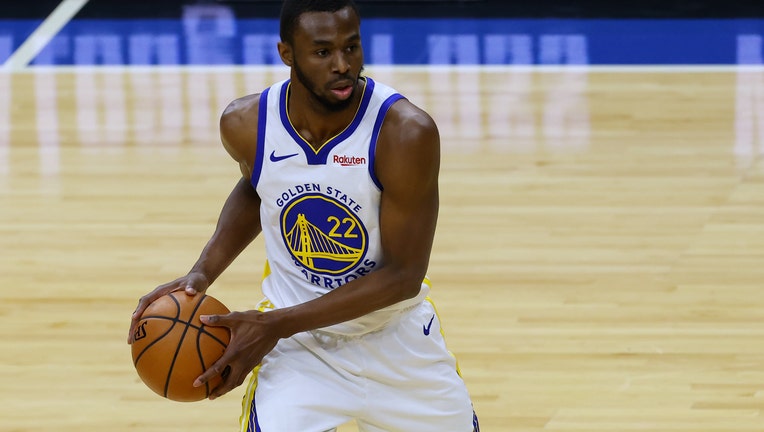 PHILADELPHIA, PA - APRIL 19: Andrew Wiggins #22 of the Golden State Warriors in action against the Philadelphia 76ers during an NBA basketball game at Wells Fargo Center on April 19, 2021 in Philadelphia, Pennsylvania. The Warriors defeated the 76ers

SAN FRANCISCO - Warriors forward Andrew Wiggins has declined to discuss whether he remains unvaccinated, but it certainly sounds like that’s the case.

Wiggins said during the team’s media day Monday that he will continue to stand by his beliefs when it comes to not receiving a coronavirus vaccine.

Wiggins declined to explain what those beliefs actually entail, saying, "It’s none of your business, that’s what it comes down to."

He faces the possibility of not being allowed into Golden State’s home building at Chase Center for games come Oct. 13 when the San Francisco Department of Public Health begins requiring proof of vaccination for large indoor events.

Wiggins said he has been given some rules to follow when in the team’s facility but wouldn’t say whether he is required to wear a mask around teammates, for example.

Andrew Wiggins of the Golden State Warriors is reportedly unvaccinated against COVID-19, which would make him ineligible to play in the team's home games. San Francisco, where the Warriors play, requires proof of vaccination for anyone at an indoor "mega event," such as a basketball games in an arena.

The NBA on Friday said it had "reviewed and denied" Wiggins’ request for a religious exemption and that he would not be able to play in Warriors home games until he fulfilled the vaccine mandate. Anyone 12 or older is required to show proof of vaccination to attend indoor events at Chase Center, and that message is on the Warriors’ website for fans.

"It’s personal, it’s private," general manager Bob Myers said of players’ vaccination statuses. "What I would say is that I’m optimistic come the first game here at Chase we’ll have our full complement of team as far as who’s healthy and who isn’t."

Coach Steve Kerr said he hadn’t given any thought to the idea of Wiggins not being available.

"We’ll just see how everything plays out," Kerr said. "We’re hopeful that it all is resolved over the next couple of weeks, and we’re going into camp tomorrow with a plan to have everybody out on the floor and ready to roll."

The Warriors’ first regular-season home game is scheduled for Oct. 21 against the Los Angeles Clippers.

"I’m not even thinking that far ahead. I’m thinking day by day," Wiggins said.

"I don’t get to that level because like I said previously, my belief and my thoughts are that we’ll have the full team," Myers said. "I’m not preparing really for anything different right now."