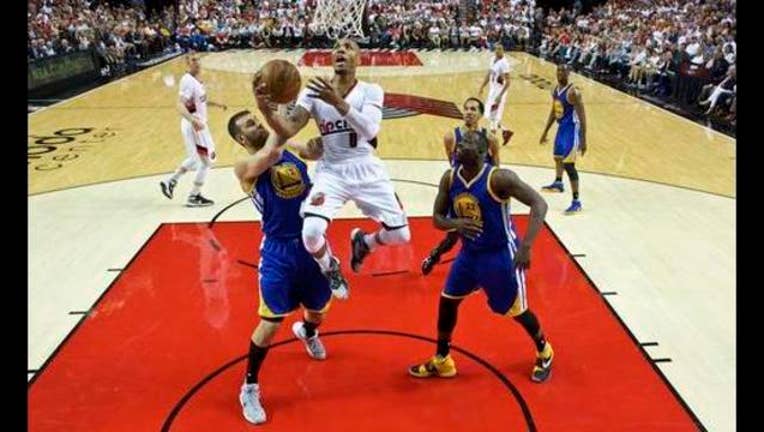 PORTLAND, Ore. (AP) — Damian Lillard had a playoff-best 40 points and the Portland Trail Blazers avoided a fourth-quarter letdown to beat Golden State 120-108 on Saturday night, cutting the Warriors' advantage in the Western Conference semifinal to 2-1.

The defending NBA champion Warriors were still without reigning MVP Steph Curry, who sprained his right knee in Game 4 of the team's first-round series against Houston.

Al-Farouq Aminu had 23 points and 10 rebounds, and CJ McCollum added 22 points for Portland. The Trail Blazers led 58-46 at the half and stretched the lead to as many as 20 points in the fourth quarter.

Draymond Green had 37 points, and Klay Thompson added 35 for the Warriors, They had had won four straight against the Blazers.

Game 4 is Monday night in Portland.

Harrison Barnes' 3-pointer and Leandro Barbosa's long jumper closed the gap to 105-92 for the Warriors with 6 minutes left. Lillard's 3-pointer with 2:47 made it 114-97, but Draymod Green answered with his own 3.

Lillard battled a chest cold in the first game of the series then was held scoreless in the final quarter of the second. But Lillard tends to respond to adversity: After he was snubbed for an All-Star bid this season he scored 51 points, including nine 3-pointers, in a 137-105 victory over the Warriors on Feb. 19. It was one of just nine losses for the Warriors in a record-setting 73-win season.

The Blazers came back from a 2-0 deficit in the opening round against the Los Angeles Clippers, who were hurt when both Chris Paul and Blake Griffin went down with injuries.

Al-Farouq Aminu and Lillard each made 3-pointers in the final minute and Portland went up 58-46 at the break. Lillard finished off the half with 25 and Thompson had 24 for Golden State.

The Blazers stretched the lead to 63-48 early in the second half, and Golden State's Andrew Bogut got into foul trouble with five. Draymond Green hit consecutive 3-pointers to close the gap to 63-56.

Curry returned to practice on Friday with a brace on his knee. The team did not scrimmage, but Curry ran through an extensive post-practice shooting routine.

Curry, who averaged over 30 points per game in the regular season, worked in a 2-on-2 drill on Saturday before Game 3. Coach Steve Kerr said he expected him to go 3-on-3 on Sunday, but would not speculate on his availability for Game 4.

Warriors: Kerr said he admires what coach Terry Stotts has been able to accomplish. "I just admire what they're (the Blazers) doing. They're one of my favorite teams to watch in an off night," Kerr said. ... Green had 19 points in the third quarter. ... Festus Ezeli was instrumental in shutting down Lillard. Ezeli, who didn't play in the first game of the series, had eight points and six rebounds in just 13 minutes in the second. Ezeli played under six minutes in the first half on Saturday.

Trail Blazers: The Trail Blazers unveiled the team's specialty license plate which will be available to Oregon drivers on Sept. 1. The plate includes the team's pinwheel logo and the words "Rip City." ... Lillard is the first Blazer with 25-plus points in four straight playoff games since Arvydas Sabonis.