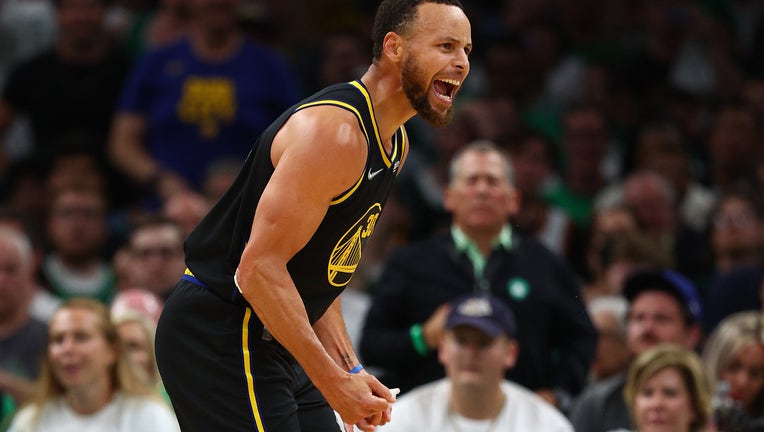 BOSTON, MASSACHUSETTS - JUNE 10: Stephen Curry #30 of the Golden State Warriors celebrates a three point basket in the third quarter against the Boston Celtics during Game Four of the 2022 NBA Finals at TD Garden on June 10, 2022 in Boston, Massachus

SAN FRANCISCO - (KTVU and AP)  Stephen Curry scored 43 points to lead the Golden State Warriors to a 107-97 victory over the Boston Celtics in Game 4 of the NBA Finals on Friday night, sending the series back to San Francisco knotted at two games apiece.

At Chase Center in San Francisco, Warriors fans were pumped at the official watch party. All the emotion from the down-to-the-wire clutch win showed as fans jumped from their seats and celebrated after watching the game on the giant screens.

"They were down but you know we're the Warriors. We fight. We battle back," said Brian Dickson, a fan who attended the party.

Curry added 10 rebounds and made a pair of baskets during a 10-0 fourth-quarter run that turned a four-point Boston edge into a 100-94 Golden State lead. The Celtics missed six straight shots during that span.

Andrew Wiggins had 17 points and 16 boards for the Warriors, who will host Game 5 on Monday night. They would also hold the home-court advantage in a seventh game, if necessary.

Fans in San Francisco at the Warriors' watch party paid $25 each for tickets. The proceeds went to the Warriors Foundation. Tickets for the Game 6 watch party will go on sale Saturday at 12 noon on warriors.com.

Many families said it was a wonderful chance to experience Dubnation excitement at a price that was more affordable.

It was a great show too, many said. Fans got a special treat at half-time.

The Flipper's Roller Boogie Palace roller skating troupe, which has a popup rink at New York's Rockefeller Center, brought their smooth moves to the hard court.

The founder Liberty Ross has teamed up with Usher to put a spotlight on roller skaters.

"My partner is Usher so he and I put together this Flipper's troupe," said Ross, "I think roller skaters are unbelievable atheltes and for some reason they've always been a kind of minority community and I'm just excited to put them on this platform and show their incredible talent and skill."

"Every single city has it's own style of skate and its own story and its own music, so it's really something fascinating," said Ross.

And "staying alive." was the disco dance theme for the Warriors on this night as they won the critical Game 4 that brought them into a tie with the Celtics.

Fans in Boston arriving at the TD Garden for what could have been the final time this season found a T-shirt draped over their seats with the 17 NBA championship banners lined up on the front. There was a blank rectangle where the 18th would go.

Now the Celtics would need to win at least one more time in San Francisco to fill in the blank.

The amped-up crowd spent much of the game booing Warriors big man Draymond Green, chanting an obscenity at him that is usually reserved for Bucky Dent, and jeering his many misses. The four-time All-Star shot 1 of 7 but finished with nine rebounds and eight assists to go with two points.

The atmosphere at San Francisco's Chase Center was electric for the NBA Finals Warriors Watch Party The Dubs defeated the Celtics in Game 4 to tie the series.

Curry's ankle was an issue coming into the night after Boston's Al Horford landed on it late in Game 3. But didn't seem to bother him on Friday night: He played 41 minutes -- only Wiggins spent more time on the court for the Warriors -- and made 14 of 26 shots, including 7 of 14 from 3-point range.

Williams was listed as questionable coming into the game with the knee injury that kept him out at the end of the regular season and the start of the playoffs. He started strong, with 10 rebounds in the first half, but he was limping in the second half and on the bench in the final minutes.

He finished with seven points to go with four assists and two blocked shots, playing 31 minutes.

The Warriors won the third quarter for the fourth game in a row, but not as decisively as they had previously.

Golden State had a 30-24 edge coming out of the break, closing with a 14-7 run to erase a six-point Boston lead. Curry scored 14 points in the quarter, making four 3-pointers.

The Warriors have outscored the Celtics by a combined score of 136-87 in the finals.

This time, it was the fourth quarter that was decisive.
------
More AP NBA: https://apnews.com/hub/NBA and https://twitter.com/AP--Sports