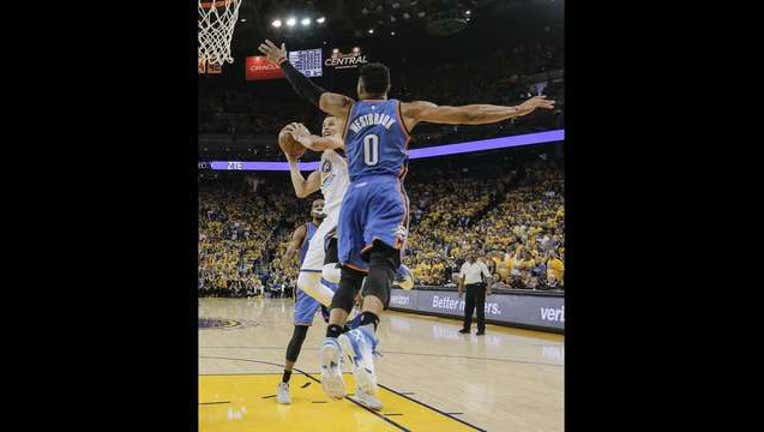 Stephen Curry looks to dunk the ball against an OKC player. Carlos Avila Gonzalez, The Chronicle)

And when Curry came on late, the Golden State Warriors were assured at least one more game in their record-setting season.

Thompson made a playoff-record 11 3-pointers and scored 41 points, and the defending champions forced a seventh game in the Western Conference finals with a 108-101 victory over the Oklahoma City Thunder on Saturday night.

Curry bounced back from a slow start to finish with 29 points, 10 rebounds and nine assists. The Warriors, who set the NBA regular-season record with 73 wins, will host Game 7 on Monday. They'll try to become the 10th team to overcome a 3-1 deficit and earn the right to play Cleveland in the NBA Finals.

We've got a lot of belief and a lot of heart, and we've given ourselves a chance to win this series," Curry said. "That's all we could ask for. There's obviously a lot of excitement, but we still have one job to do."

Thompson scored 19 points in the fourth quarter to help the Warriors overcome an eight-point deficit.

"Steph told me before I went out in the fourth, 'This is your time,'" Thompson said. "'You know, put on a show out there and have fun.' I took those words to heart, and I just tried to be aggressive."

Oklahoma City dominated Games 3 and 4 at home, but the Warriors made 21 of 44 3-pointers on Saturday, while Oklahoma City was 3 of 23.

Kevin Durant scored 29 points and Russell Westbrook added 28 for the Thunder. But Durant made just 10 of 31 shots and Westbrook was 10 of 27.

The Thunder, who blew a number of fourth-quarter leads during the regular season but had been better in the playoffs, fell apart in the final minutes after Golden State had finally gone ahead for good. The Thunder committed six turnovers in the final 2:55, and Westbrook had three in the last 55 seconds.

That really wasn't — hasn't been us in the last month and a half," Thunder coach Billy Donovan said. "I thought we got a little stagnant coming down the stretch."

Thompson's barrage was similar to Curry's performance in Oklahoma City during the regular season. Curry scored 46 points and tied and NBA record with 12 3-pointers to help the Warriors beat the Thunder in overtime.

Thompson kept the Warriors in it with four 3-pointers in just over seven minutes to start the fourth quarter. Curry then hit two 3s, the second of which tied the game at 99 with 2:47 to play.

Westbrook lost control of the ball, and after Thompson missed a 3, Westbrook turned the ball over again, leading to a layup by Curry. Westbrook turned it over one more time, and Golden State was in the clear.

They switched everything and kind of closed the game up, and we missed some shots and they got hot from the 3," Durant said.

The Thunder led 23-20 after one quarter, then seized momentum early in the second. Steven Adams' powerful one-handed dunk on Warriors All-Star Draymond Green drew a roar from the crowd and gave Oklahoma City a 37-28 lead. Green, who had hit Adams in the groin area twice during the series, was a constant target for the vocal Thunder fans.

Thompson opened the second half with back-to-back 3-pointers to give the Warriors a 54-53 edge, but the Thunder closed the quarter strong and led 83-75 heading into the fourth.

The Warriors held the Thunder to 18 points in the fourth quarter to stay alive. They expect another tough battle in Game 7.

"To be in this situation — people were doubting us," Green said. "It will be the hardest game of our lives. It will be way harder than this game. Going back home, everybody will think, 'Oh, it's done.' It will be way harder. But if we come out and do what we did and stick to the game plan, we'll be fine."