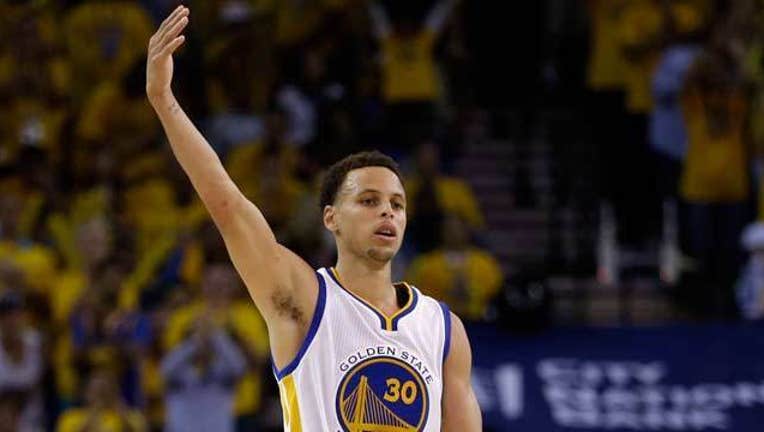 OAKLAND, Calif. (KTVU-AP) -- The Golden State Warriors are a win away from ending one long championship drought and extending another.

Stephen Curry made seven 3-pointers and scored 37 points, and the Warriors withstood another brilliant performance from LeBron James to outlast the Cleveland Cavaliers 104-91 on Sunday night for a 3-2 lead in the NBA Finals.

With a sellout crowd rocking and roaring in their golden-yellow shirts, the newly minted MVP and his teammates took control of the game — and possibly the series — in the final minutes. Curry connected inside and out — sometimes way out — to help the Warriors pull away, and James and the Cavs had no way to counter.

The Warriors will try to win their first title since 1975 on Tuesday night in Cleveland, which hasn't won a major sports championship in 51 years. Game 7, if necessary, would be in Oakland on Friday night.

James carried Cleveland as far as he could. The four-time MVP had 40 points, 14 rebounds and 11 assists, slowing down the pace the way only he can.

There were 20 lead changes and 10 ties in a game that featured nearly as many bruises as baskets — but few big men — and the league's two biggest attractions trading thrilling scores.

James made a 34-footer with the shot clock about to expire midway through the fourth, and Curry answered with a step-back 3-pointer. Klay Thompson, who scored 12 points, followed with another from deep shot for the Warriors.

Andre Iguodala later hit a 3 and then grabbed a rebound, tossing in a left-handed put back while getting fouled by Tristan Thompson. Iguodala strutted back to midcourt, staring at the announced crowd of 19,596 — just about all of them on their feet through the fourth — before missing the free throw.

Curry added a cutting layup, then lost Matthew Dellavedova off the dribble and stepped back for a 3 that gave Golden State a 96-86 lead with 2:44 left.

James hit a 3-pointer, and the Cavs began fouling Iguodala — a sub-par free throw shooter — to try and extend possessions. But Curry never let the game get out of his hands, connecting on another 3-pointer with 1:12 left that had him pounding his chest and pointing to the sky.

The game followed a familiar formula.

Smith made four of his first seven 3-pointers before going cold, but landed his biggest shot when he extended his right forearm and shoulder to plow through Draymond Green's screen, knocking the Warriors forward to the ground. Officials called a flagrant 1 foul on Smith after a review.

Dellavedova dragged Green down going for a rebound in the second quarter, and the officials assessed double fouls after the players got tangled up on the floor. James Jones also grabbed Iguodala with two arms from behind on a layup attempt, which the Warriors argued should've been a flagrant foul.

The physical first half ended with Harrison Barnes putting back Curry's miss for a dunk over James to start a three-point play that put the Warriors up 51-50. James scored or assisted on 16 of Cleveland's 17 field goals in the half.

James struggled to supply the same power in the third quarter, scoring just four points and handing out one assists. The Warriors closed on a 10-2 run to take a 73-67 lead entering the fourth.