Excessive heat warning for most of Bay Area

Excessive heat warning for most of Bay Area

OAKLAND, Calif. - Excessive heat warnings and advisories are in effect from Saturday morning to Monday night across the Bay Area, the National Weather Service announced.

Some areas will see their temperatures reach more than 20 degrees higher than their average.

While San Francisco will not be under an excessive heat warning, there will be a heat advisory for the city during the same holiday time period.

The National Weather Service says scorching temperatures can lead to heat related illnesses, such as heat exhaustion and heat stroke.

People most vulnerable, include those who spend a significant amount of time outdoors, those without air conditioning, young children, the elderly, and those with chronic ailments.

Coastal areas are forecast to reach temperatures ranging from the upper 70s to the 90s during the day, with cooler temperatures at night in the mid 50s to mid 60s range.

Regions further inland can expect very hot temperatures, with highs in the mid 90s to mid 100s, peaking at temperatures near 110 Sunday.

Nights will be cooler, with lows between 65 and 70.

A slight cooling trend is expected Tuesday, with temperatures remaining warm rather than hot after Labor Day. 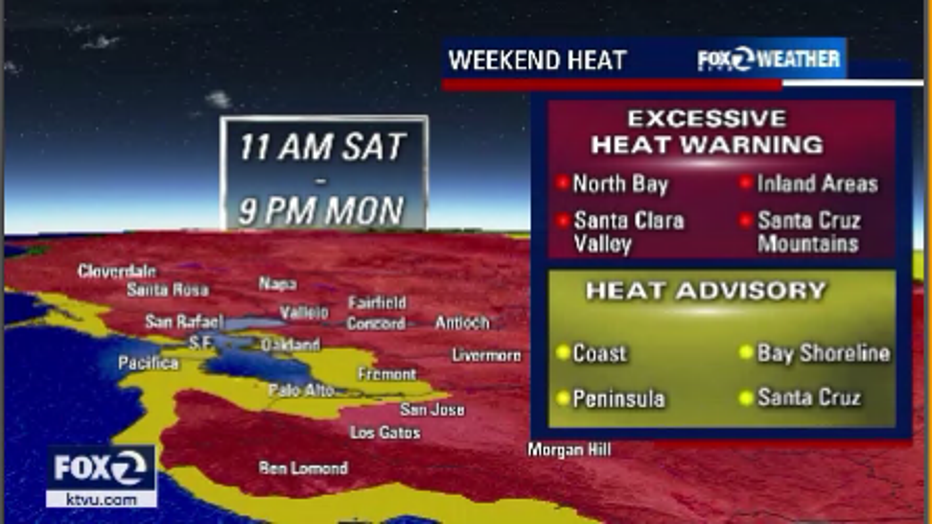